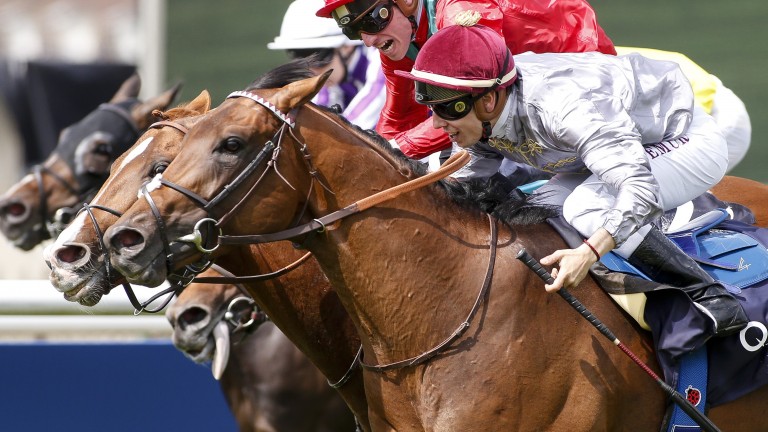 Brametot: wins the Prix Du Jockey Club from Waldgeist at Chantilly on Sunday
Alan Crowhurst
1 of 1
By Ollie O'Donoghue 7:34AM, JUN 5 2017

For David Stack of Coolagown Stud, there was more to look forward to than just attending the Ireland versus Uruguay friendly in Dublin on Sunday evening, as a mare he owns together with two friends received a significant boost to her pedigree earlier in the day.

The 13-year-old Acatenango mare Morning Rise is a half-sister to the Rajsaman colt Brametot, who became only the third horse - after Shamardal and Lope De Vega - to complete the Poule d'Essai des Poulains and Prix du Jockey Club double since the turn of the millennium.

"He came from last to first after giving them a head-start. Again, we were very lucky," said Stack on his way to the Aviva Stadium. "We followed him from when he won his maiden and conditions race last year, and he then won a Listed race impressively.

"He won the Fontainebleau with authority, and looking at the pictures from today, he just gone it done - he won by just a nostril."

The unraced Morning Rise is out of the winning Law Society mare Morning Light, a half-sister to Monsun, the three-time Group 1 winner and German Derby runner-up who went on to become a hugely influential sire.

Asked about how the trio acquired the mare, Stack said: "She was with a breeder, Jim Hennessy, an owner of ours who I bought her for about six years ago.

"While he had her, she produced a Papal Bull, who's now five, and two Frozen Fires, now three and four, all geldings, and she also has a very nice two-year-old filly by our Galileo horse Shantaram.

"Jim said he was retiring from breeding and asked were we interested," continued Stack. "So I bought her and we put her in foal to the horse we brought in from France last year Apsis. She has a very nice colt foal at foot by him."

Brametot's double could not have been more timely, with the three-year-old Frozen Fire gelding due to go through the ring at the Goffs Land Rover Sale in just over a week's time.

"She's now in foal to Carlotamix, another son of Linamix, so it's a similar cross to Brametot. The Linamix line works with this family so we might have something very good coming from that mating," said Stack.

Were Carlotamix - who stands at Coolagown at a fee of €3,500 - to produce a champion, it would not be his first, as he has already supplied dual French Champion Hurdle winner Gemix, while his best Flat performer is dual Listed winner Calvin Williams, who has a peak Racing Post Rating of 110.

The plan for now though is to sell Morning Rise and her foal, and after Brametot's exploits at Chantilly, the pair looks sure to receive plenty of interest.

FIRST PUBLISHED 8:00PM, JUN 4 2017
He won the Fontainebleau with authority, and looking at the pictures from today, he just gone it done - he won by just a nostril