Stack comes up trumps with dam of improving North America

Daughter of Yankee Victor was bought for just €1,000 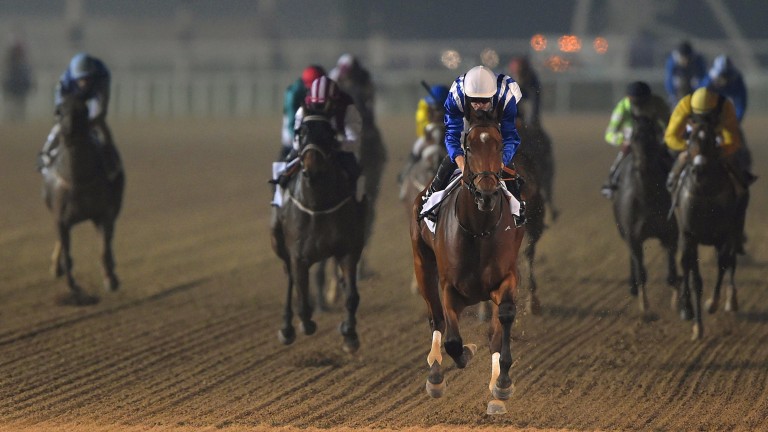 The sales history of Northern Mischief, dam of Saturday’s Group 3 scorer North America, has been something of a rollercoaster, and results from Meydan suggest the ride for those closest to her may not be coming to a stop just yet.

The first of her six spins through the sales ring came when she changed hands as a yearling at the 2003 renewal of the Keeneland September Sale for $145,000, when sold by Lakland LLC and bought by Glen Haven. Some five years later, and after a 16-race career which yielded two victories and a third in a Grade 1, her price rocketed to $450,000 when bought by Denford Stud from the Keeneland ring in November 2008.

She has been sold three more times since, with her value decreasing considerably on each occasion. Her most recent date at the sales came during the latest renewal of the Goffs November Sale, where she was picked up by David Stack of Coolagown Stud and South African breeder Nigel Reily for the modest sum of €1,000.

”We headed to Goffs with a shortlist of about 15 or 20 mares, but we came away empty-handed on the first day,” said Stack. “On day two we viewed Northern Mischief, who was consigned by Dermot Cantillon’s Tinnakill House. Dermot and Meta [Osborne] are great because they’re so open and they explained why the mare was poulticed and why she had not got in foal that year. Nothing was hidden.”

Armed with all the necessary information, including that North America was due to debut in Dubai in just a couple of days time, Stack headed to the ring, and was surprised to find himself unopposed.

“We were expecting to give eight to ten thousand for the mare,” he explained, “I bid on her and began looking around for the next bidder, but no other hands went up. Andrew Nolan was on the rostrum and he asked if anyone else was going to bid on her. If I could’ve thrown my catalogue at him to drop the hammer I would have!”

But soon enough Stack got his wish and the mare was knocked down for just €1,000. And his good fortune did not end there, as he also managed to secure the very next lot through the ring, Burren Rose - a daughter of Storm Cat, for €4,500.

While picking up the Grade 1-placed Northern Mischief for such a princely sum looked like good business at the time, results from Meydan on Saturday paint the profile of the mare in an altogether better light.

Northern Mischief’s fifth foal, North America, is the result of the daughter of Yankee Victor being sent to Darley flagbearer Dubawi by Sheikh Fahad’s Qatar Bloodstock operation in 2011.

As a yearling North America was bought by John Ferguson for 100,000gns and raced for Godolphin under the care of Charlie Appleby, but he failed to get his head in front in six starts in Britain, and was transferred to the yard of Satish Seemar for the start of the 2016 Dubai season. North America has since gone unbeaten in four outings on dirt, a sequence that saw him run out a convincing victor of the Group 3 Firebreak Stakes on Saturday.

“I was hoping for third place, to be honest!” joked Stack. “Now we’re going to start getting greedy and hoping the horse goes for the Dubai World Cup. He won with his ears pricked and is obviously a horse on a serious upward curve.”

Now that North America has breathed new life into his dam’s page, the next twist in the tale of Northern Mischief is set to come when she visits Ballyhane’s very much in vogue stallion Dandy Man, a sire both Stack is particularly sweet on.

“I was introduced to Nigel by Mark O’Hanlon of ITM - who do a fantastic job of attracting outside investors - about six years ago,” said Stack. “But he’s has always been a fan of Irish breeding. He has two mares in foal to Dandy Man at the moment, and that’s who Northern Mischief will be covered by this year.

"He’s a stallion on a serious upward curve. When Nigel saw the Dandy Man foals he was very impressed with how well he stamps his stock and how well they all moved. It was a no-brainer to send Northern Mischief to him.”

Stack also revealed that his other Goffs acquisition, Burren Rose, will join Northern Mischief on the journey to Joe Foley’s Ballyhane Stud, as she is pencilled into visit new boy Prince Of Lir.

The resulting foals will be offered for sale in due course, and given the skyward trajectory of the respective careers of both North America and Dandy Man the sky may well be the limit for expectations once they hit the ring.

There are plenty examples of a horse’s price having dropped dramatically with good reason, but in the case of Northern Mischief Stack has proved that digging that little bit deeper in your research might mean you need not dig so deep into your pockets when it comes to sales day.