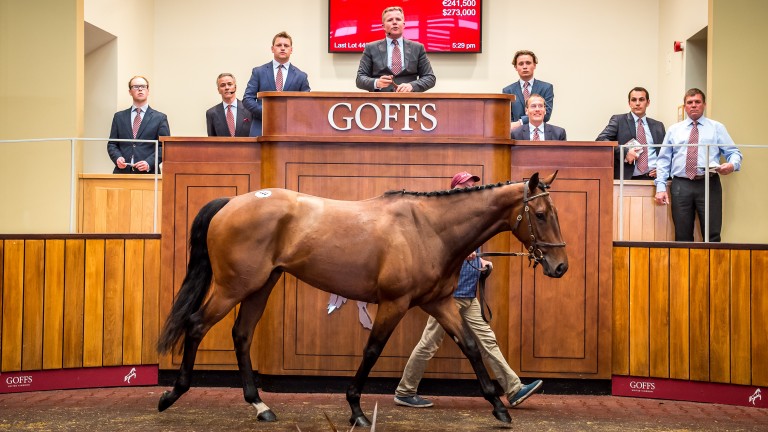 Hot on the heels of a record-breaking store session at the 2017 Goffs UK Spring Sale, trade showed no signs of slowing on Wednesday as the point-to-point and horses in training catalogue kicked off in style.

The session-topper gave an insight as to why trade had proved so strong the previous day, as a horse bought for just £15,000 at the 2016 store sale returned 12 months later to fetch £210,000 when signed for by Gordon Elliott.

It was Donnchadh Doyle of Monbeg Stables that had secured the four-year-old, named Invincible Cave, as a store, and then prepared him to land a Bartlemy maiden point by an eased-down seven lengths.

“He was a grand horse, he wasn’t dear and Court Cave has always been lucky for me so I always buy a couple by him every year,” said an understandably chuffed Doyle. “He’s been very easy to train, a great eater, he jumps well, just a very straightforward horse. We knew he’d be in the shake-up when we took him pointing and he did it well on the day. He’s got plenty of pace so I’m sure he’s well up to winning a bumper in the fall.”

Harold Kirk was the frustrated underbidder for the son of the Invincible Spirit mare Bespoke Baby, who was unplaced in four starts on the Flat and fared little better when sent hurdling.

Earlier in the session Kieran McManus, accompanied by Jonjo O'Neill, had the final say at £140,000 for the Flemensfirth four-year-old Fleminport, who finished runner-up on the second of his two starts in points for Colin McKeever. 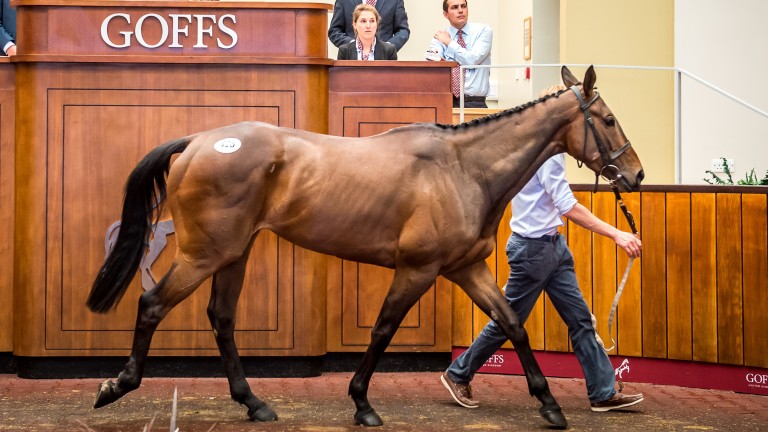 Sandmason may not be a stallion familiar to many, but his sole representative during day two of the Spring Sale had certainly caught the eye of plenty of those in Doncaster, as the four-length bumper winner Summerville Boy went the way of owner Roger Brookhouse for £130,000.

"He's going home to the grass," said Brookhouse, who is yet to decide on a trainer. "I have another Sandmason as well, called Black Op with Tom George, you could say that's what made me look at him. But he won his bumper impressively and moves well, I just think he needs a holiday, so he'll have a good summer at grass."

The five-year-old, out of the Carroll House mare Suny House, had been in training with Sam Curling, and carried the colours of Richard Downes to success at Killarney, with his former owner having bought him as a store for just €4,000.

It wasn’t just Irish pointers in demand, however, as Tessa Greatrex of Highflyer Bloodstock went to £115,000 for Article Fifty, a four-year-old son of Doyen who won a Chaddesley Corbett maiden earlier in the month on debut for Philip Rowley.

“He’s a lovely horse and will be trained by Warren [Greatrex]," said the agent. “We thought he was nicest pointer in the sale so we’re delighted to get him. Fingers crossed he’s a star. Now that the British-based four-year-old pointers are getting competitive you have to support them. I didn’t think we’d get him to be honest.”

The gelding is a son of Doyen and the Golan mare Annie Go and from the family of champion Flat performer Selkirk. He was bought by Rowley as a store for €22,000 at last year’s Goffs Land Rover Sale. 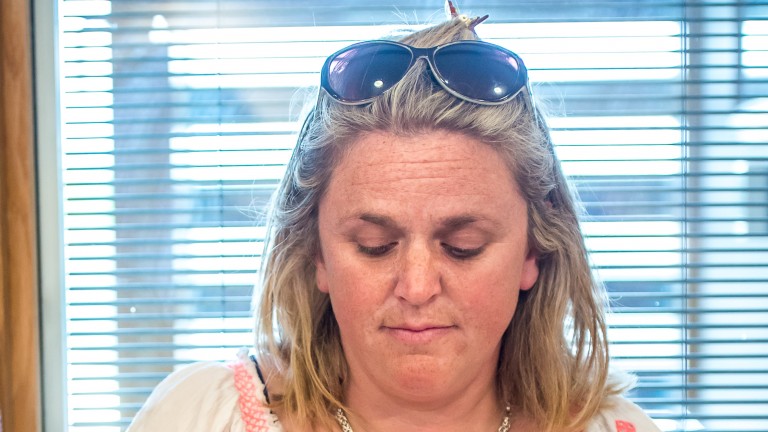 The toast of Doncaster

There was few, if any, better pedigrees among the 746 Spring Sale entries than the one belonging to Settie Hill, who has taken the long route from Kentucky to South Yorkshire.

The four-year-old is a son of Cape Blanco out of the Syncline mare Claire Soleil, meaning he is a half-brother to Group 2 UAE Derby winner and Breeders’ Cup Classic runner-up Toast Of New York.

He went through the sale ring at Keeneland twice, for $95,000 as a foal and for $160,000 as a yearling. Mocklershill then sold him at the 2015 Craven Breeze-Up Sale for a much reduced 10,000gns to Michael Carty, but a debut win in a Market Rasen bumper had seen his value rise appreciably, as David Minton of Highflyer parted with £110,000 to secure him.

“He went to the breeze-ups at Newmarket but wasn’t mature enough for that,” said consignor Mark Dwyer of Oaks Farm Stables. “He came back to mine for a bit after that and I’ve always kept an eye on him since so it was good to see him win his bumper for Neville Bycroft. He’s clearly just a big horse that’s taken time, and the more time he gets the better he’ll be.”

The once-raced four-year-old will now head to the Lambourn yard of Nicky Henderson having been purchased for an existing client of the trainer who wished to remain anonymous.

The early exchanges struggled to match the vibrant levels of trade witnessed on Tuesday, but when Nicky Henderson's Seven Barrows draft entered the ring the buying bench sprung into action, with 15 horses eventually being sold for turnover of £475,500.

The talented Vaniteux is on his way to Pond House after David Pipe, stood with owner Bryan Drew, went to £125,000 for the son of Voix Du Nord.

“Obviously he’s got very good form in the book and these types don’t come on the market very often,” said Pipe. “He’s a ready made Saturday horse, anything from two to two and a half miles, he’ll be in all the good handicaps and all the Graded races. We’ll get him back and have a play about with him and see what we do next.”

Arguably the finest moment of the eight-year-old’s career, which has included 20 starts and six wins, came a short distance away from the sales complex, when landing the Grade 2 Lightning Novices’ Chase at Doncaster in January 2016. 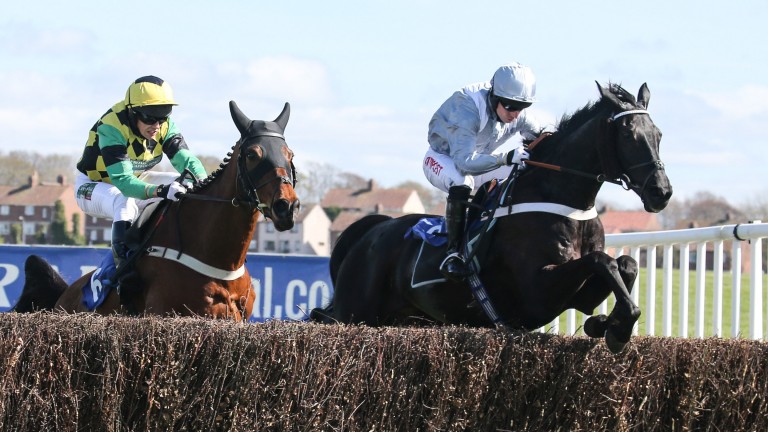 One of the most recognisable names in Flat racing appeared as a buyer at Doncaster during Wednesday’s session, as Tim Gredley, son of leading owner and breeder Bill, signed for Bivouac from the Seven Barrows draft at £72,000.

Bivouac was bought with a career point to pointing in mind, but despite the family’s association with the Flat, with the likes of Big Orange and User Friendly, the prospect of tackling a set of steeplechase fences is unlikely to phase Gredley, who is also an international-level showjumper as well as budding amateur jockey.

“I’ve just started doing a bit of pointing so the plan is I’ll ride him myself,” said Gredley. “I bought a nice horse in the summer called Silvergrove and I’ve been trying to find another like him to have some fun with. He’ll be trained by James Owen down in Newmarket so I can go and ride him out every morning.

“The final aim is something like the Foxhunters’ at Aintree. He jumps well and seems like he’ll do the job, and because he’s still young hopefully we can both progress together.”

Bivouac, a son of Califet, won four of his 11 starts for Henderson, achieving a peak RPR of 133 over fences, and was last seen finishing second in a Kempton novice chase back in early-April.

And it's high ho Silverhow

Altior has been one of the genuine stars of the jumps scene in recent times, with an unblemished record over fences that includes a trio of Grade 1 successes, notably the Arkle at this year’s Cheltenham Festival.

His older half-brother’s exploits have set Silverhow an impossibly hard act to follow, but Colin Tizzard plainly has faith that we are yet to see the best of the six-year-old son of Yeats, having snapped him up for £60,000.

“He might be just as good as Altior but no one knows it yet!” said Tizzard with tongue firmly in cheek. “He’s been bought for Derek Shaw. He’s had horses in partnerships for years and wanted a nice horse that’s ready to run. He’s a tidy young horse, and he’ll almost certainly go novice chasing.”

The gelding, who was bought by Highflyer Bloodstock as a store for €72,000, won two of his nine starts for Henderson, and changes hands with a RPR over hurdles of 126.

FIRST PUBLISHED 8:17PM, MAY 24 2017
There was few, if any, better pedigrees among the 746 Spring Sale entries than the one belonging to Settie Hill