Spinster Stakes winner Valiance to be offered at Fasig-Tipton November

Bluewater Sales will consign the Todd Pletcher-trained daughter of Tapit 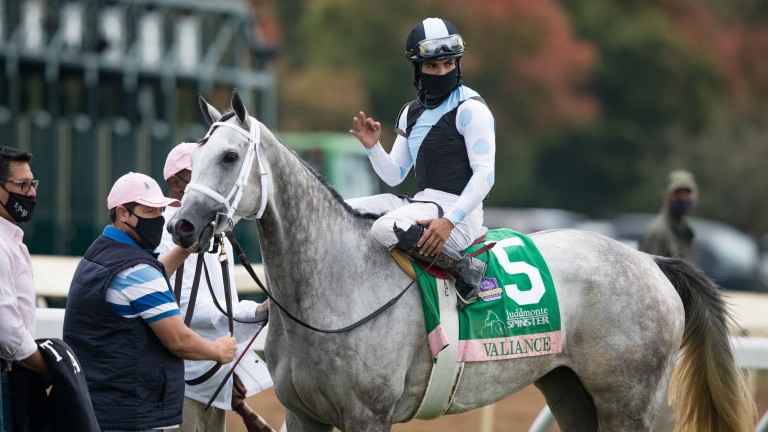 Valiance and Luis Saez won the Spinster Stakes at Keeneland in October 2020
Wendy Wooley/EquiSport Photos
1 of 1
By Bloodstock World Staff 10:31AM, SEP 28 2021

Valiance, a Grade 1 winner and daughter of leading sire Tapit, has been retired from racing and will be offered at Fasig-Tipton’s upcoming November Sale in Lexington, Kentucky.

The grey took last year’s Spinster Stakes in tremendous style, defeating a field that included two other Grade 1 winners. She followed up that victory with a game second in the Breeders’ Cup Distaff to multiple champion Monomoy Girl.

In addition to being a Grade 1 winner on dirt, Valiance won her first three career starts on turf, including Monmouth’s Open Mind Stakes, as a three-year-old.  Trained throughout her career by Todd Pletcher, she has career earnings of $809,575.

“Valiance is a top-class race mare and a terrific individual,” said Pletcher.  “She’s always been a true professional to train in the morning and was so versatile on the racetrack in the afternoon. She’s a good one.”

A $650,000 Fasig-Tipton Saratoga Selected Yearling, Valiance is out of Last Full Measure, an Empire Maker mare who took the Grade 1 Madison Stakes. Her second dam, Lazy Slusan is a multiple Grade 1 winning distaffer and millionaire.

WATCH → Valiance posts a determined victory in the @JuddmonteFarms Spinster (G1) at Keeneland, she punches her ticket to the @BreedersCup Distaff (G1) at Keeneland on Nov. 7! pic.twitter.com/1QMCebuqkf

“Valiance was a stunning yearling with a royal pedigree and she followed through on the racetrack,” said Aron Wellman, president of Eclipse Thoroughbred Partners.  “She trained with brilliance, ran with brilliance on turf and dirt at the highest level and provided our partners with huge thrills.

"She's a rare filly who had impeccable breeding, gorgeous looks, immeasurable talent and that intangible killer instinct to win her races.  She is an elite mare who offers the complete package and she is cut out to be an exceptional broodmare.”

FIRST PUBLISHED 10:31AM, SEP 28 2021
She's a rare filly who had impeccable breeding, gorgeous looks, immeasurable talent and that intangible killer instinct to win her races