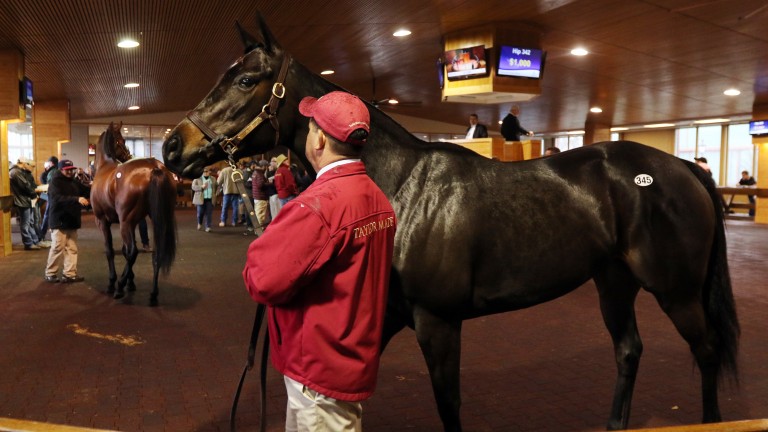 Well-bred six-year-old mare Cinnamon Spice was the star turn in the second and final session of the Kentucky Winter Mixed Sale at Fasig-Tipton on Tuesday.

The winning daughter of Candy Ride and half-sister to Grade 1 CashCall Futurity winner Violence was signed for at $700,000 by Frances Relihan on behalf of Oussama Aboughazale of International Equities Holding.

“She did cost more than we expected but the quality always rises to the top,” Relihan told the Bloodhorse. “We knew we would have a challenge to get her. We thought she was the best physical in the sale. There is great depth in her pedigree.

“She had a lot of ability from what we could see on the track but she didn’t get black type. She trained really well and showed some brilliance.

“Mr Aboughazale is looking to add quality mares to his broodmare band and we thought this nice young mare would be ideal. She comes from a very good programme at Fox Hill.”

Aboughazale was a major player at last month's Keeneland January Sale, where he bought 11 lots including the mares Delightful Joy and Joyfully for $700,000 and $575,000.

Cinnamon Spice, whose third dam is outstanding champion Sky Beauty, was originally a $350,000 purchase by Fox Hill Farms at the Keeneland September Yearling Sale in 2012.

Another mare campaigned by Fox Hill Farms brought the next best price in the session.

Glory, a daughter of Tapit who finished second to Tuttipaesi in the Grade 2 Santa Ana Stakes last March, was sold to Abdullah Saeed Almaddah for $300,000.

Originally a $260,000 Keeneland September yearling purchase, she hails from a strong Moyglare Stud family as she is out of a daughter of Sadler's Wells and Sun Chariot Stakes winner Dress To Thrill, in turn out of Irish 1,000 Guineas heroine Trusted Partner.