Speed the key ingredient for Mountarmstrong

Alexander Goldrun among the high-class mares on the farm 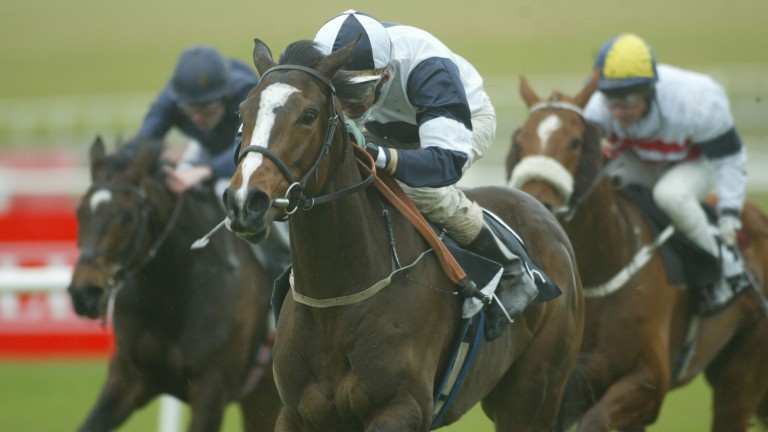 The 'Alexander' mares indelibly linked with Mountarmstrong Stud have provided Noel O’Callaghan and his sons Charles and Paul with plenty of memorable moments both on the track and in the sales ring. Their mating schedule this year looks likely to keep the good times rolling.

Queen of the broodmare band is Alexander Goldrun, winner of five Group 1 races including the Prix de l’Opera and Hong Kong Cup - and dam of a Frankel filly who sold for €1.7 million to China Horse Club in 2015, since named Goldrush.

Having produced “a gorgeous colt" by Muhaarar, in the words of stud manager Robert Tierney, she is to continue in the fast lane with a visit to Tally-Ho Stud speed king Kodiac.

The home-bred Lady Alexander is the matriarch of the farm, a dual Group 3 winner who became a star producer as the dam of successful Ballyhane Stud sire Dandy Man and Queen Mary Stakes winner Anthem Alexander, who was herself retired to Mountarmstrong last year and is due to foal to Kodiac.

Rested last year, Lady Alexander has a date with Exceed And Excel in the hope of sustaining her success with Danehill sires – Dandy Man being from the only crop of Mozart and Anthem Alexander being by Starspangledbanner.

Lady Alexander’s daughter Alexander Queen has produced five winners from as many foals to race, including the Listed Tetrarch Stakes winner Alkasser.

“Alexander Queen has had a fine colt by Kingman, a big strong foal and a really good-looker,” Tierney said. “The mare will be going back to speed this year, visiting Dark Angel.”

Patience Alexander is another homebred black-type winner who is now a member of the Mountarmstrong broodmare band. A daughter of Kodiac out of Star Profile, she won the Listed Marygate Stakes and was placed in the Group 3 Albany Stakes.

She is in foal to Dawn Approach and has been chosen as one of the select group of mares to visit Derrinstown Stud’s new boy Awtaad, winner of last year’s Irish 2,000 Guineas.

“We've heard good reports about Dawn Approach’s stock so hopefully they will be a success on the track for him this year," said Tierney. "Noel is a fan of Awtaad so he's delighted to send Patience Alexander to him.”

Remember Alexander, who defeated subsequent Dewhurst Stakes winner Parish Hall when she landed the Tyros Stakes, is one of two O’Callaghan-owned mares who will be making a trip to France to visit Shalaa.

She will be accompanied by maiden mare Rapacity Alexander, winner of the Listed Prix La Fleche for David Evans last year. The three-year-old daughter of Dandy Man is a sister to Group 1-winning sprinter Peniaphobia.

Another mare to gain black-type on the track last year who is set for her first covering is Nations Alexander. The daughter of Dark Angel won the Group 3 Sweet Solera Stakes and the Listed Empress Stakes and was placed twice in Group 2 company for Richard Hannon. She will be among Muhaarar’s stellar book for his second season.

Gleneagles has been chosen for the well-related Group 3 winner Obama Rule in 2017. The Danehill Dancer mare is out of Mennetou, an unraced Entrepreneur daughter of Arc heroine Detroit and therefore closely related to another Arc winner in Carnegie. Obama Rule is also due to foal to Gleneagles in the spring.

The Gurkha is set to be visited by Dream Role, a half-sister to Group 3 winner The Happy Prince. An unraced daughter of Acclamation out of Maid To Dream, she was purchased for 40,000gns at Tattersalls February Sale last year and is in foal to Bated Breath.

La Reveuse is the latest mare to join the Alexander girls at Mountarmstrong. A five-year-old daughter of Galileo out of Louve Rare, she is a half-sister to Group 3 winner Lil’Wing from the family of champions Loup Sauvage and Loup Solitaire.

“She was purchased last month at the Goffs February Sale and is a maiden who will be covered by Fastnet Rock," said Tierney. "Again, it’s the Sadler’s Wells-Danehill cross and Fastnet Rock has obviously worked very well with Galileo mares."

Online Alexander, who won three times over five furlongs and was Listed-placed over six furlongs for trainer Kevin Ryan, has a colt foal by No Nay Never. She is another of the Mountarmstrong mares to visit Kodiac this year.

FIRST PUBLISHED 6:53PM, MAR 26 2017
Alexander Queen has had a fine colt by Kingman, a big strong foal and a really good-looker