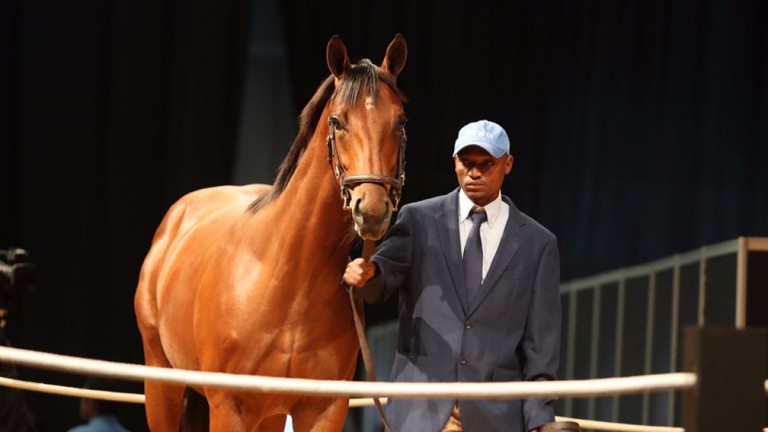 Coolmore equalled the record for the most expensive yearling ever sold at auction in South Africa on Saturday evening when MV Magnier went to R6 million (£354,000/€414,000) for a son of Trippi during the opening session of the Cape Thoroughbred Sales' Premier Sale.

Already named Charles, the Drakenstein Stud colt attracted interest from several parties including Amanda Skiffington, bidding on behalf of Fiona Carmichael, as well as trainer Justin Snaith, but it was Sheikh Fahad Al Thani who ended up as underbidder on his first visit to the sale.

"He's from a top-class nursery and is an outstanding individual," said Magnier, having also signed for last year's record-setting sale-topper from Gaynor Rupert's consignment. "We've bought him together with a couple of partners, and are delighted to have got him."

The son of former champion sire Trippi, who stands at Rupert's renowned farm, is the first foal out of Group 2-winning Dynasty mare Demanding Lady from a family that goes back to Coolmore's young sire War Command.

Magnier added: "This is a fantastic sale and a wonderful place to come to. The effort they've put in is amazing and there are some lovely horses here. I've also been racing a couple of times here and have been very impressed.

"We've been in partnership with Markus Jooste for a couple of years now and we look forward to a great future with him."

Frankel hot on the Cape

Frankel's first ever yearlings selling in South Africa have been subject to considerable attention before the auction, with the most expensive of three out of four lots sold so far coming for his daughter out of Little Fastnet that made R4 million (£236,000/€276,000).

Bought by Justin Casse for a partnership that includes one of the agent's most longstanding American clients and for Larry Nestadt's Tawny Syndicate, the filly will be trained by Alec Laird.

"We thought she was the best Frankel in the sale, and we thought she would make this price. She has a great walk and hopefully has a good career ahead of her," Casse said of the close relative to Requinto.

The Juddmonte sire's initial offering went the way of Johannesburg trainer Johan Janse van Vuuren who went to R1 million (£59,000/€69,000) for one of three fillies catalogued.

Consigned by leading breeders Klawervlei Stud, the July-born yearling is out of the Fastnet Rock mare Daffodil from the family of Imperial Monarch and Mount Athos.

"She was bought for an owner of mine, Laurence Wernars. She was a bit small, and I'd have liked a bit more size, but she's got a very good walk and good clean legs. We've bought her for the blood," the handler said.

Frankel's only colt catalogued was bought by John Freeman when he had the final say at R900,000 (£53,400/€61,800). Out of the winning Holy Roman Emperor mare Fly To The Moon, he counts Grade 1 winner Forte Dei Marmi further on his page.

Frankel's first ever runner in the country, Miss Frankel, out of champion racemare Val De Ra, had finished seventh in a two-year-old maiden at Kenilworth on Saturday afternoon for Avontuur Stud.

In earlier trade it was another offering from Drakenstein, Captain Of Tortuga, who set the sales arena alight when selling to Bennie Marais of Klipdrif Stud for R4.5m (£265,000/€310,500).

By champion sire Captain Al, the colt is the second foal out of Rupert's multiple Group 1 winner Ebony Flyer.

"I've bought him for an international client, and Team Valor will take a share in him," Marais said. "He's a lovely individual who is very athletic with a lot of substance. We'll take him back home and then decide where he'll go into training."

China Horse Club also put their name on the buyers' board during the evening when purchasing two yearlings, the most expensive coming for the colt Flying Arrow at R3.75 million (£222,800/ €257,700).

Another from the Drakenstein draft, he is the second foal out of dual South African Group 1- winning Dubawi mare Happy Archer by Captain Al from the family of quality Australian performer Lolita Star.

Out of the eight-time winning Silvano mare Daffodil Day, the filly hails from the family of Group 1 winner Villandry. "She's a lovely type and we really liked her," Michael Wallace said on his first visit to the sale.

"We bought a couple of yearlings here lastyear and they are with Joey Ramsden and Mike de Kock but we haven't decided yet on a trainer for them."

A filly already named The Vapors had set the standard early on in the proceedings with a partnership of Henri Bozo, Markus Jooste and Alban Chevalier de Fau just failing to see off Pieter Graaff when she was knocked down for R3.6m (£212,400/€248,400).

Yet another offering from Drakenstein, the daughter of Variety Club's sire Var is out of champion three-year-old miler Captain's Lover from the family of Ebony Flyer.

"For us she was the best filly in the catalogue," said Graaff, who owns Lammerskraal Stud and bred last year's South African Triple Crown winner Abashiri.

"We were determined to have her. Hopefully she'll make a lovely broodmare in time."

The sale continues on Sunday.