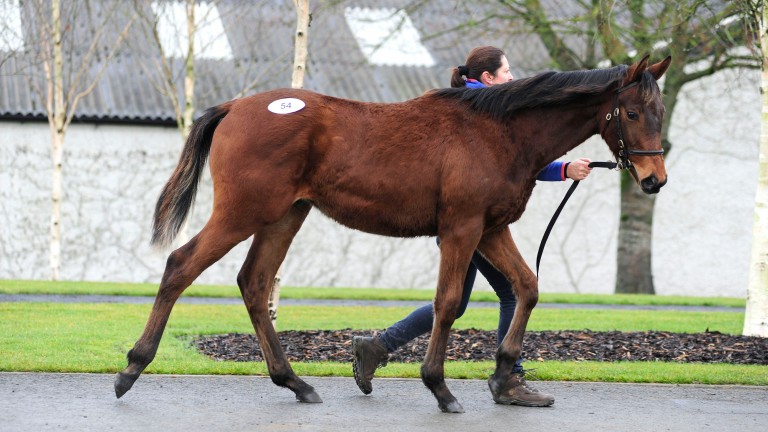 Shantou was in demand at the Tattersalls Ireland February National Hunt Sale on Tuesday as a son of the St Leger winner was the most expensive horse sold at the first Irish auction of 2017.

The Burgage Stud resident also returned the best average of any stallion at the sale - his three colts selling for an average of €26,300.

His popularity continues to grow with the exploits of recent Grade 1-winning novice hurdlers Airlie Beach and Death Duty and no doubt they were in the minds of the syndicate of purchasers who paid €46,000 through Tom and Katie Rudd of Ormond Bloodstock for the colt.

His dam is a Listed-winning hurdler by the great Monsun, no doubt added to the sale-topper's appeal to buyers. An April-born colt, he is a half-brother to L'Aigle Royal, a Graded-placed son of Sholokhov.

"He was bought for a syndicate and will come back here in 2019 for the Derby Sale," revealed Tom Rudd. "He's a very nice colt with a good pedigree and by a leading sire so he has a lot going for him."

Anna Ross purchased the Tuesday's most expensive son of Presenting, paying €37,000 for a colt with a Grade 1 pedigree.

A bay born in April, he is the second foal out of the unraced Oscar mare Ballycloven Oscar who is a sister to the Willie Mullins-trained Felix Yonger. Owned by Andrea and Graham Wylie, he counts the Grade 1 Champion Chase at Punchestown among the highlights of a glittering career.

"He's a lovely horse who has a lovely temperament. Presenting is a top-class sire and his dam has a good pedigree. He will be back for resale," she said of the colt consigned by Frank Motherway's Yellowford Farm.

Dan MacDonald dashed to Fairyhouse from Paul Nicholls' Ditcheat yard where he was checking on the progress of his horses in training with the champion trainer who include this season's Grade 2 bet365.com Hurdle winner Silsol.

The reason for his visit to Fairyhouse turned out to be the sale's only yearling by red-hot sire Walk In The Park. Standing with Liam Burke, whom McDonald met through Nicholls and trains for the Scot in Ireland, McDonald paid €30,000 for the colt.

Bred in France and already named, Go Ashesvay is the first foal out of his young dam Benali D'Airy and was offered by Ennel Bloodstock.

"He was one of the best here today and I liked him a lot," said McDonald. "I'll keep him with Liam until he is three and then we'll decide whether to train him or sell him on."

McDonald was underbidder on another of the day's top lots as he sought to add to the group of horses he owns with his Irish-born wife Michelle.

He said: "I've got seven or eight in training with Paul and a couple with Sandy Thomson in Scotland and Liam trains Coolbane West for us too.

"Liam is one of the best trainers around, you can see how good he is because of how he handles Coolbane West. He is a difficult horse who has been given time and now has come into his own."

The owner has a hands-on approach with his horses and knows them and the team around them very well.

"I believe that an owner is part of the team and I spend a lot of time visiting the trainers' yards and watching the horses on the gallops. We have Rowdy Rocher with Sandy and we were thinking of retiring him before Christmas, as he wasn't running well and he is a bit of a family pet.

"Rachel McDonald who works for him has looked after him and ridden him in his last two races, and he has won both this month. He has thrived with her and it shows how horses respond to care and time."

McDonald had lost out only minutes earlier on a unique offering in the sale, a colt by Famous Name, the only horse catalogued by the Irish National Stud stallion.

Consigned by Burrow Road Stables, the May colt is the first foal out of an unraced sister to Grade 1 winner Graphic Equaliser and to multiple hurdle scoer Montana Slim. Their half-brother by Bob Back is the Graded-winning hurdler Back On Top.

Tower View Stables was the successful bidder, securing the bay for €34,000, and he is set for a point-to-pointing career representing the same connections as Champers On Ice, a six-figure graduate from that sphere.

"He is a lovely horse, a very good mover," said Alan Harte, representing the purchasers. "Famous Name was such a good, tough racehorse for Dermot Weld and the dam is from a lovely family."

The sole progeny of their sires in the sale were in demand with the only yearling by Montmartre offered on Tuesday also proving attractive to buyers.

Michael Moore went to €40,000 to secure ownership of the grey colt who is the first foal of an unraced sister to Grade 1 Ryanair Chase and Manifesto Novices' Chase hero Uxizandre. The late May foal was sold by Caroline Berry.

Teofilo is not a name that crops up in the pedigrees of many horses at National Hunt sales but the sire of Classic winners was responsible for the most expensive filly on Tuesday.

The bay, who was also the only representative of her sire, is a half-sister to Grade 1 Triumph Hurdle winner Tiger Roll and to Ahzeemah, Irish St Leger runner-up and winner of the Group 2 Lonsdale Cup. She was bought for €28,000 by Eamon Phelan.