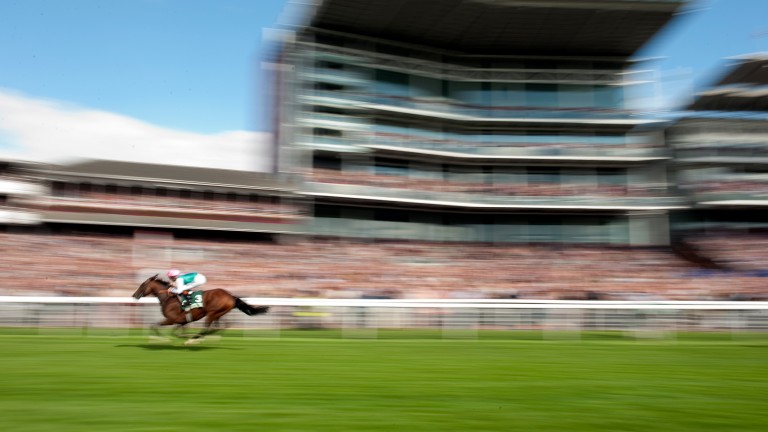 Frankel: none could get close to the legend in the Juddmonte International at York
Edward Whitaker
1 of 1
By Zoe Vicarage 7:37PM, AUG 22 2017

Five years after Frankel amplified his brilliance with a seven-length demolition of his rivals in the Juddmonte International, Gordon Elliott snapped up a son of the dual world champion at the Tattersalls Ireland Ascot August Sale on Tuesday to go juvenile hurdling.

Commentariolus, who had been campaigned in France, was sold for just £30,000. While his best effort on the track was a fourth-placed finish over a 1m6f maiden at Clairefontaine, he boasts a number of classy relations.

He is a half-brother to Group 2 winner Curtain Call and Listed scorer Nature Spirits as well as a three-parts brother to Galileo's dual Listed-winner Launched. His dam, the Darshaan mare Apsara, is a half-sister to the Group 1 performers Hernando and Johann Quatz.

Of his new purchase, Elliot said: "Mouse O'Ryan and myself bought him on spec to go juvenile hurdling. He's got size and scope and goes on soft ground, so we're hoping to find an owner."

He will not be the first son of Frankel to go hurdling as at the Tattersalls July Sale, Musikel was bought by Richard Venn for 21,000gns for trainer Chris Gordon.

York on Wednesday could yet prove the scene of more joy for Frankel as he is represented by four of his progeny in the Group 2 Great Voltigeur Stakes.

The quartet includes Cracksman, who came within a neck of providing his sire a first Group 1 win in Britain and Ireland when beaten by Capri in last month's Irish Derby. Prior to that, he had also finished third in the Derby at Epsom in June.

Count Octave, Atty Persse and Mirage Dancer strengthen his hand and will all bid for their chance of a first victory at Group Level and perhaps provide their sire with his 14th individual stakes winner.