Something old, something new as Pentire shows young gun the way at 25 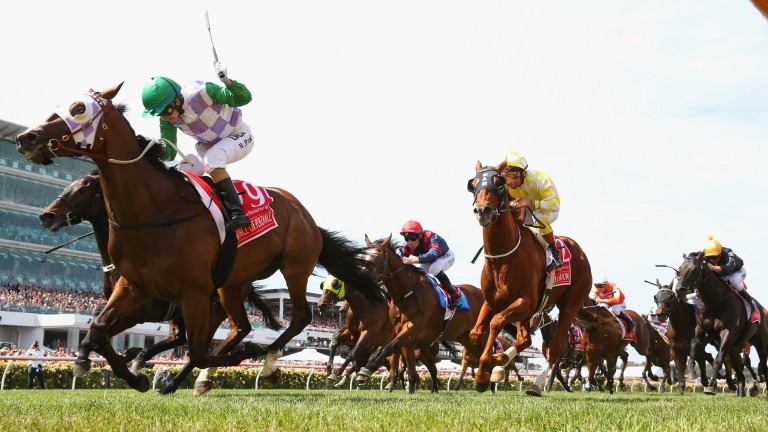 Group 1 wins in Australia on Saturday put two very different sires in the limelight, Snitzel confirming himself in his prime with another new record even as an old stalwart showed himself to be no back number.

Pentire, a hero of the mid-1990s racing scene, extended his prolific record in the southern hemisphere when his son Volatile Mix became his 16th individual scorer at the highest level in the South Australian Derby at Morphettville.

The 25-year-old son of Be My Guest, whose biggest success came in the 1996 King George VI and Queen Elizabeth Diamond Stakes, was bought by John Ferguson when acting as a talent scout for owner Mollers Racing.

While his racecourse exploits may seem to belong to a different era, his second career has ensured that he has not been forgotten. It has been a long and sometimes winding road - taking in stints at Shadai Farm in Japan and Gestut Isarland in Germany - but Pentire has become cherished as the foundation sire of Rich Hill Stud in New Zealand.

He was already in the veteran stage when his son Prince Of Penzance landed the 2015 Melbourne Cup for Darren Weir - also trainer of Volatile Mix - and then Xtravagant won the New Zealand 2,000 Guineas in the same week.

Volatile Mix's victory on Saturday not only secured the gelding's first victory at the highest level but also gave his sire a third success in the race after Pantani in 2002 and Zarita in 2008.

Snitzel meanwhile continued to consolidate his reputation as Redzel won the Doomben 10,000 over six furlongs on Saturday - one of four stakes winners on the day, and his fifth Group 1 winner of the campaign.

This latest spree took Snitzel to another new record, with A$13.8 prize-money in the "premiership" season surpassing the tally of A$12.9 million set by Winx's sire, Street Cry, last season.

The son of Redoute's Choice will doubtless be much in demand even at A$176,000, his new fee for the upcoming breeding season at Arrowfield Stud. The venerable Pentire, in contrast, has a managed book at just NZ$10,000.