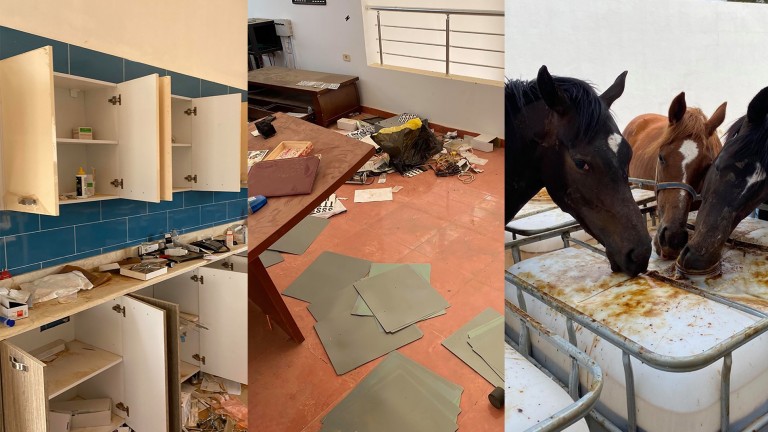 Images from the ransacked stud near Tripoli; Al Shaab staff continue to search for missing horses
1 of 1
By Andrew Scutts UPDATED 8:02PM, JUN 9 2020

The 1998 Solario Stakes winner Raise A Grand has been recovered by Al Shaab Stud, whose Tripoli based operation suffered devastation in January when armed raids resulted in the capture of dozens of horses, including stallions and in-foal mares.

The now-24-year-old, who was saddled by the late Pip Payne to land the Sandown Group 3 under Gary Carter, and is a former resident of Rossenarra Stud, was among six stallions snatched by armed militias.

Also thankfully back in safe keeping are 15-year-old Metternich, who ran twice at Wolverhampton when with John Gosden late in 2008, and Australian-bred 16-year-old Brut Force.

However, fellow Australian-breds Backdraft and Group 2 winner Churchill Downs, who are also both 16, and A.P. Indy's 20-year-old half-brother Eavesdropper have yet to be located.

Dr Amad Eshaab, manager of Al Shaab Stud, Libya's biggest such operation, said: “By the grace of God and the steadfastness of the Libyan people, 38 out of the 59 horses hijacked many months ago have been located.

"The search is still ongoing for the remaining horses, including a number of mares who were in foal.”

Dr Eshaab added that many of the horses recovered were still suffering from wounds sustained when captured, and complications arising, while he indicated that the mares were generally in better condition than the stallions.

The Queen has been among those to send their best wishes, a note from the office of her private secretary to Al Shaab Stud reading: "We are most grateful to you for bringing these sad events to the Queen's attention. At this difficult time this message comes to you with Her Majesty's best wishes."

Dr Eshaab, a veterinarian, has built up the stud with horses and mares imported from Europe and Australasia in a bid to create a racing and breeding industry in Libya.

The nation first plunged into chaos after the killing of Colonel Gaddafi during the 2011 uprising.

The north African country is split between rival administrations in the east and west, each backed by opposing fighters struggling for power in the wake of Gaddafi's downfall.

Khalifa Haftar's Libyan National Army - whose aligned militias raided Al Shaab - has since last year sought to gain control over the west, fighting the Government of National Accord in an abortive attempt to seize Tripoli.

GNA forces are backed by Turkey, while the LNA is supported by the UAE, Egypt and Russia.

FIRST PUBLISHED 12:58PM, JUN 9 2020
The search is still ongoing for the remaining horses, including a number of mares who were in foal