Too Good Too Hard also sets broodmare session record at $560,000 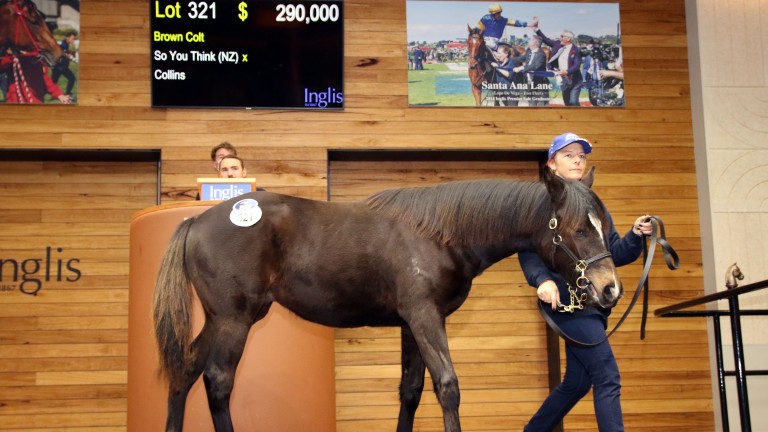 The So You Think colt from the family of Makybe Diva was the top-selling weanling on the second day of the Great Southern Sale
Inglis
1 of 1
By Tim Rowe of ANZ Bloodstock News UPDATED 4:27PM, JUL 5 2021

The highest-priced weanling sold on the second day of the Inglis Great Southern Sale, a So You Think colt from the family of champion mare Makybe Diva, may be retained to race with the buyer of the A$290,000 (£158,000/€184,000) foal in no rush to commit to putting him back through a sale in 2022.

The second most expensive weanling sold at this year’s Oaklands Junction sale, which was delayed by three weeks due to a Covid-19 outbreak in Victoria, was purchased by Mitchell Bloodstock on behalf of a client and helped the 2021 Great Southern Sale to across-the-board records, surpassing the 2019 benchmark results.

The broodmare session also achieved records despite a smaller offering.

Coolmore-based So You Think was Australia’s most popular sire in 2020, covering 261 mares, as breeders began to recognise the star racehorse’s growing achievements in the stallion barn and that fact was not lost on agent James Mitchell, who had to extend the budget for day two’s top lot.

“He wins Derbies, he wins Group 1s regularly, he’s a very good stallion and this is a nice colt out of a full-sister to one of the best mares you’ve ever seen [Makybe Diva].

New top lot for Day 2 and isn’t he a beauty! Strong bidding for the So You Think x Collins colt (lot 321) of @MakybeS as he sells to @mitchellbstock for $290k. Congratulations! #InglisGreatSouthern pic.twitter.com/CFp0gs3pCz

“The client was obviously pretty bullish. We probably spent a little bit more than I was expecting, but it’s the market we are in and he wanted him, so that is where we ended up.”

Mitchell said the client would assess how the colt develops in the coming months before deciding whether to reoffer him at next year’s yearling sales or retain him to race.

The son of So You Think is the third foal out of the unraced Collins, of course a sister to three-time Melbourne Cup heroine Makybe Diva. Her first foal, the unraced juvenile filly Just Get It Done, is in training with Colin Little, while her second, a colt by All Too Hard, was bought by fellow Caulfield trainer John Moloney for A$110,000 at the Magic Millions Gold Coast Yearling Sale in January. Bred and sold by Makybe Stud, he was catalogued as lot 321.

Mitchell has been in attendance at the Melbourne sale this week and was glad he was on the ground, coming away with seven weanlings for a spend of A$671,000.

He said: “There are some good-quality weanlings here. Inglis has done a great job and obviously with the permit I am on, I’ve been just going from the hotel to the sale and back, but it’s certainly been worth it to come down.”

Joe Murray, who runs Tony Santic’s Makybe Stud near Geelong, believes the colt had plenty of commercial appeal if the buyer chose to reoffer him next year.

“He’s been a bit of a marquee item being out of a full-sister to Makybe Diva,” said Murray.

“He looks like a So You Think with the forelock and everything like that, so most people who saw him came back for a second look.

“The x-ray hits were coming through, so we knew he would be popular. We didn’t think we’d have to protect him at all because the market was strong on him straight away.”

Trainer Little described the two-year-old half-sister as “tough”’ and Murray believes the weanling sibling is in the same mould.

“We’ve got a bit of a saturation of the Makybe family, so we had to bring a couple here,” he said.

“We weren’t selling him for any other reason other than we’ve got other yearlings who will come through.

“His x-rays were clean and we weren’t going to bring him here if he had any issues. You are only going to walk away disappointed if you bring a horse with issues, and with a pedigree like that he was always going to match up.”

It’s not a new recipe for sales success but the demand for racemares off the track with some stakes form behind them was again evident at the Great Southern Sale, with Too Good Too Hard setting a Melbourne broodmare record at A$560,000.

Too Good Too Hard, a $120,000 Inglis Premier Yearling Sale graduate, is a half-sister to the stakes-placed It’s A Myth and a daughter of The Good Wife, herself a half-sister to four-time Group 1 winner Divine Madonna.

“We knew she was a lovely mare coming here and she had great credentials coming here, so we knew she’d sell pretty well, but that was well above expectations,” said Mill Park Stud’s Chris Watson.

“She’s gone to a fantastic buyer in Suman Hedge, so we are thrilled. These fillies off the track have been super popular this year and if they’ve got a bit of residual value with a big, deep black-type family they just sell exceptionally well.

“It was a combination of things, her pedigree and her physique. She’s an athletic type  with a deep pedigree, which is something most stud farms are looking for.

“We’ve got two to three generations of this family. We would have loved to have kept her, but we’ve got a lot of this family. It's fantastic to see some of the family getting out to some other big studs and into the marketplace as well.”

Hedge bought Too Good Too Hard to go to Written Tycoon.

“She was such a beautiful mare and I’ve known a bit about her for some time because one of my clients is in her and I’ve been following her progress all the way through,” he said.

“I hadn't seen her before the sale, but when I first laid eyes on her I saw a beautiful mare and she’s got so much quality.

“She gets out over a bit of ground, has beautiful angles and moves so well."

FIRST PUBLISHED 4:09PM, JUL 5 2021
We probably spent a little bit more than I was expecting, but it’s the market we are in and he wanted him