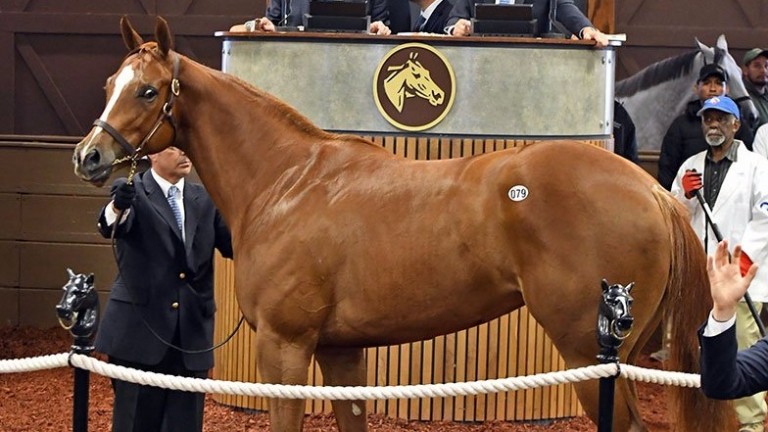 The Smart Strike filly bought by Xavier International Bloodstock
Fasig-Tipton
1 of 1
By Ron Mitchell of Blood-Horse 12:10PM, MAY 23 2017

Led by a Smart Strike filly sold for $525,000, the Fasig-Tipton Midlantic sale of two-year-olds in training got off to a solid start on Monday with across-the-board gains in a market that continued trends seen earlier in the juvenile auction season.

Held at the Maryland State fairgrounds in Timonium, near Baltimore, the Fasig-Tipton sale drew a large and diverse crowd of agents, trainers, and end-users.

"We try to match last year or do better, so exceeding last year was great," Paget Bennett, Midlantic sale director, said. "It was good. Everybody was so exciting about what they were bringing [to the sale] and the quality of the horses. They know what sells here and if you bring a good horse, it will sell."

The session-topper, who breezed an eighth of a mile in the co-fastest pre-sale work time of :10, was bought by Chris Brothers' Xavier International Bloodstock from Hartley/De Renzo Thoroughbreds. Bred in Kentucky by Craig Singer, the filly is out of the stakes-winning Cozzene mare Salty Response and was purchased for $275,000 from the Lane's End offerings at last year's Fasig-Tipton August selected yearling sale at Saratoga.

"I thought she had one of the best breezes I've ever seen over this track," Brothers said. "And it's hard to knock a Smart Strike filly. She has some residual [value] down the road."

Brothers, who bought the filly on behalf of a partnership group that is still forming, said his final bid was near the top of where he was prepared to go. "I didn't think I would be able to get her. I was pretty tapped out."

The buyer said the filly progressed from the Fasig-Tipton Gulfstream two-year-olds in training sale in March from which she was withdrawn after working an eighth-mile in :10 2/5.

"She's grown up some and she's levelled out," Brothers said. "She was a little hip-high at the sale down there. She's really kept coming into herself."

Randy Hartley, who said the chestnut filly was one of the fastest juveniles he and partner Dean De Renzo have consigned in a long time, was pleased with the outcome, although he would have preferred a higher price.

"You always want more when you have one that works like that and with that pedigree, but we're pleased," the horseman said. "I guess that's just what the market is calling for today."

Although his Smart Strike filly met the criteria of buyers at the top of the market, Hartley said the first session epitomised the polarisation seen earlier in the year.

"It's like we're just peddling horses," the consignor said. "It feels like a different market here this year. Everybody is on the same horses, so you just hope you have a few of those to make up for the others. We've lost money on almost everything we've sold today except for the big filly. But you just can't keep them. I hope people get good deals and come back next year and buy more off of us."

Two fillies sired by Into Mischief shared the Monday's second-highest price of $425,000.

Marrette Farrell, acting on behalf of Speedway Stables, went to that level for an Into Mischief filly from McKathan Bros, agent. Out of the stakes-placed American Chance mare So Long Sonoma, the filly was bred in Kentucky by JD Stuart, PC Bance, and Burning Daylight Farm.

"I loved her demeanour in the back walking ring," Farrell said. "She showed so much class. She is a very powerful filly and I think she will come around relatively early."

Consigned by Taylor Made Sales Agency to the 2016 Keeneland September yearling sale, the filly was bought by Patrice Miller/EQB, agent for Zayat Stables, for $180,000. The filly previously went through the ring at Keeneland's November sale, where she was acquired by Siena Farms from Bluegrass Thoroughbred Services for $80,000.

Agent Donato Lanni, acting on behalf of an unnamed client, bought the other Into Mischief filly, from Wes Carter, agent for Carolyn Vogel. The filly, whose third dam is Grade 3 winner Katilac Ofthestars, will be trained by Hall of Famer Bob Baffert, Lanni said.

The big-ticket Into Mischief sales were not surprising, according to Ned Toffey, general manager of Spendthrift Farm near Lexington, where the stallion stands for $75,000.

"One of the fillies had two blank first dams but she was just so athletic," Toffey said of the filly sold by Carter. "She is a beautiful filly and had a great breeze. That shows you the kind of respect he is commanding. That seems to be what he does over and over.

"He's still doing it on the strength of mares that are theoretically not as good as the mares he's been bred to since. There are bigger and better things to come."

Bred in Kentucky by John R. and Frank Penn, the colt was purchased by JJ Crupi for $100,000 at last year's Keeneland September yearling sale. He breezed an eighth-mile in :10 1/5 prior to the Midlantic sale.

"We just loved his breeze and the way he acted at the barn. He's a really nice colt," Boden said, adding that Arklow's stakes success helped in their selection. "Arklow looks like a special horse."

"He was the at the top of my list from the get-go," Treadway said. "With that update in the pedigree, the dam looks like she's going to be a producer."