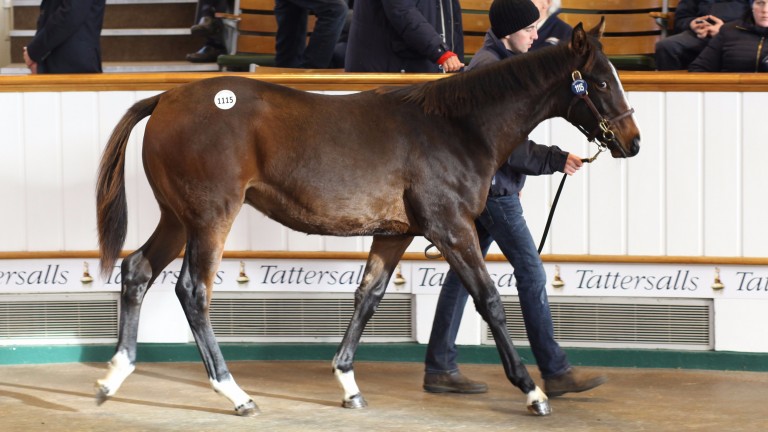 After the highs of Friday's session the Tattersalls December Foal Sale concluded with a subdued day of trade on Saturday.

Tattersalls had compiled a catalogue of 1,136 lots, 11 per cent fewer than the 1,277 in last year's edition. In total, 743 lots changed hands for a clearance rate of 78 per cent.
In his closing statement Edmond Mahony said: "The strength to the market at the Tattersalls October Yearling Sale has been reflected in the sustained demand we have witnessed from start to finish of the foal sale.

"Another major contributory factor has been the decision to return the sale to its traditional four-day format after the five-day foal Sale last year. This was not a decision taken lightly, but it has without doubt played a major part in the success of this week's sale."

The sale may be deemed as a success in Thursday and Friday's more select sessions, when there were big prices and the clearance rates stood at 82 per cent and 84 per cent respectively, but figures for Wednesday and Saturday's sessions made for less encouraging reading, with both showing a clearance rate of 72 per cent.

It should be remembered that the smaller catalogue was compiled from a larger foal crop in 2016, so the ill effects of overproduction may have been masked.

Trade during Saturday's session was headed by a colt by Showcasing from Dukes Stud. Agent Richard Knight went to 110,000gns for the February-born son of the Shamardal mare Sunrise Star, a daughter of the Listed-placed Tudor Court, a close relation to Coronation Stakes winner Fallen For You.

"I thought he was the best foal here today," said Knight, who was buying on behalf of a British client. "He's been bought to resell, probably at Book 2 next year.

The colt was offered by behalf of breeder Lady Bamford.

Shortly after Dukes Stud landed another good result when Marc-Antoine Berghgracht went to 95,000gns for an Iffraaj filly out of Pink Flames, a Redback sister to EP Taylor Stakes winner Lahaleeb. The filly, bred by Dukes Stud's Charlie Wyatt in partnership with Simon Sweeting of Overbury Stud, is a half-sister to Flanders Flame, a Listed winner in Spain.

"Clive Larkin and Jim Robertson and all the team at home have done a wonderful job in preparing the foals," Wyatt said. "The Showcasing was a cracking first foal. We raised him and prepped him from the word go and he came here and showed very well. The mare is in foal to Pivotal.

"The Iffraaj filly is lovely. We'll probably send the mare back to Dutch Art."

Later in the session another foal by Showcasing, who is due to stand the 2017 covering season at Whitsbury Manor Stud at a fee of £35,000, made its way into the session's top ten lots after Rathasker Stud and Howson and Houldsworth Bloodstock parted with 87,000gns for the filly out of Pinch Of Posh, a Pivotal half-sister to Haydock Sprint Cup winner Pipalong.

Geoffrey Howson has an enviable record with his Showcasing purchases, having bought this year's Sprint Cup and Commonwealth Cup winner Quiet Reflection for £32,000 as a yearling from Doncaster's Silver Sale.

It did not take long for the six-figure mark to be passed with pinhooker Paul McCartan going to 100,000gns for the Kodiac filly out of the Pivotal mare Carved Emerald early in the session.

The January foal is from a good fillies family that includes Cheveley Park Stakes winners Embassy and Pass The Peace and antipodean Group 1 winners Atlantic Jewel and Commanding Jewel.

Soft-ground pedigrees look the way to go in competitive handicap