Five lots following in the footsteps of champion Belardo to Deauville 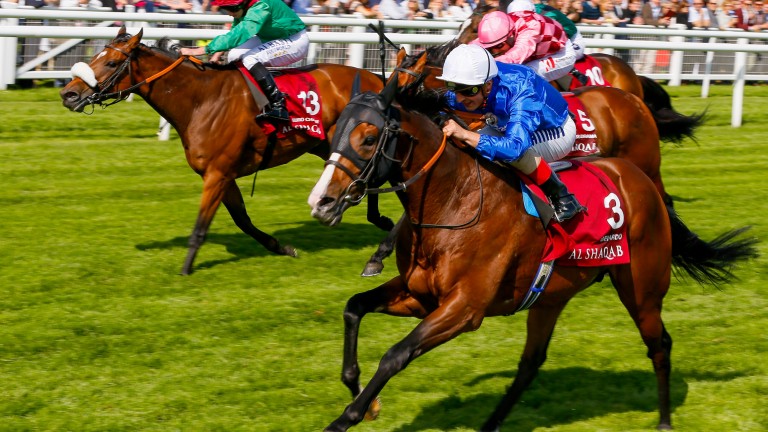 Belardo was sold by Ballylinch at Arqana's August yearling sale before becoming a champion juvenile for his freshman sire
Cranhamphoto.com
1 of 1
By Chris McGrath UPDATED 2:04PM, AUG 14 2017

John O'Connor always enjoys his trips to Deauville. After all, he spent part of his bloodstock education with Dr Jean Plainfossé in Normandy, and it was at Arqana's August yearling sale in 2013 that the Ballylinch managing director sold a colt from the first crop of Lope De Vega for €100,000 to Ted Voute. That turned out to be Belardo, the champion juvenile who headlined his sire's explosive start.

Moreover Lope De Vega, as a dual Classic winner in France, is only one source of a distinctly cross-Channel flavour to the six-strong roster of Flat stallions at the historic County Kilkenny stud. Lawman and New Bay are likewise winners of Prix du Jockey Club; Make Believe is another winner of the Poule d'Essai des Poulains, while his Prix de la Foret success was matched – at the expense of Goldikova herself – by Dream Ahead.

The latter, whose flagbearer Al Wukair made his Group 1 breakthrough in Deauville on Sunday, has himself been lodging in France this year at Haras de Grandcamp. Nonetheless the Ballylinch draft will again focus on quality rather than quantity, with just five lots catalogued for the elite sale this weekend.

"That would be fairly normal for us, to send no more than half a dozen over," O'Connor said on Sunday. "We choose horses we think will suit the sale, and we feel it's important to have a consistent presence at the other sales too, to find a draft that will work well at each one. But we've certainly done well at Arqana, I think we've topped the averages there a couple of times and of course that was where we sold Belardo."

Not that he has been rewarded with the luckiest of draws, two of the draft actually among the first five due through the ring in Saturday's opening session.

But there is a bonus in that Lot 2 is bound to attract plenty of attention, as the first yearling by Kingman to be offered at auction. This is a January colt out of Janicellaine, a Beat Hollow granddaughter of Ingabelle, foundation mare of the modern Ballylinch broodmare band.

Moreover her first foal, an Iffraaj filly named Chrisellaine, shaped with very timely promise on her debut for Charlie Hills at Ayr on Monday. Hills saddled her Grade 3-placed dam's half-sister Chriselliam to win both the Fillies' Mile and the Breeders' Cup Juvenile Filly Turf in 2013, and must have been delighted to see the way Chrisellaine was picking up before being badly hampered in the straight. She had raced freely in the early stages yet retained enough energy to be challenging strongly when brought to a virtual standstill, doing well to regroup for fourth.

Danielli, the dam of dual Group 2 winner Very Special as well as Chriselliam and Janicellaine, is a half-sister to Ingabelle's two Group 1 winners, Priory Belle and Eva's Request.

"We bred Janicellaince, but actually sold her to Willie Carson and Chris Wright who then sold her on to race in Canada," O'Connor recalled. "But when Danielli emerged as an important mare for us, we brought her back to Ballylinch. This is a very nice, strong colt with plenty of power to him. I think he'll prove a good advert for Kingman." 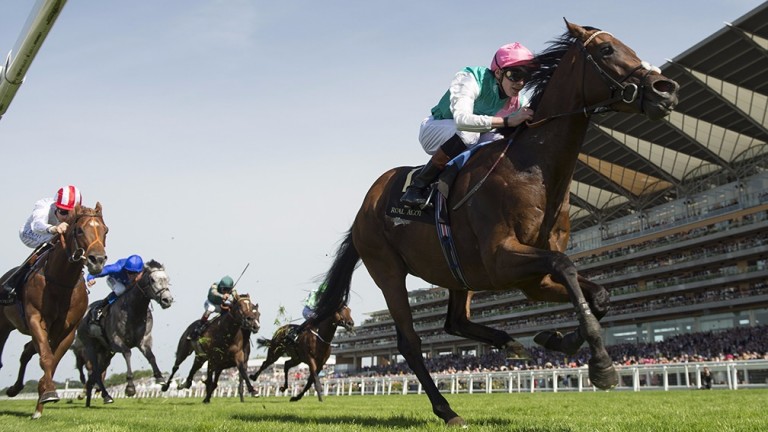 The emphasis of the Ballylinch draft is heavily on young mares, with the remaining quartet all first foals.

With one intervening lot withdrawn, O'Connor will barely have time to see out his first offering before the entry of Lot 6, another January colt. He is out of Jillnextdoor, a daughter of Henrythenavigator O'Connor bought for himself after a 32-race career in sprint handicaps for Mick Channon.

"It's a family I've liked for years," O'Connor explained. "I remember her granddam winning the Lowther and her dam making the frame in the Cheveley Park. So it's a family I wanted to invest in, and she has come up with a really athletic, free-moving colt."

The Ballylinch team then gets a break until Lot 104, who maintains the trend as another early foal out of a Listed-placed Samum half-sister to Prix du Moulin runner-up Akatea from the Wildenstein family of Beverley D and Diana Stakes winner Angara. Abilene was carrying this filly when acquired for €310,000 at the Tattersalls December Sale in 2015. "She's a January 8 foal and a big, powerful, mature filly," O'Connor says.

Ballylinch has tapped into another great breeder's bloodlines to produce Lot 149, a Kodiac filly bought in utero with Ebeyina when that mare was culled by the Aga Khan Studs for €460,000 at the Goffs November Sale in 2015. Listed-placed in a light career for Dermot Weld, Ebeyina is a granddaughter of Irish Oaks and Prix Royal-Oak winner Ebadiyla - herself a half-sister to three Group 1 winners including Estimate and Enzeli, both on the Gold Cup roll of honour at Royal Ascot.

Throwing Kodiac into that mix obviously makes for an intriguing cocktail. "She's extremely pretty and looks like she should be very popular," O'Connor said. "In some ways you see a lot of the sire in her, she has a lovely mature shape to her."

The final offering is Lot 165, a Declaration Of War filly out of the Grade 3-placed Galileo mare Gulsary, who is a half-sister to Prix de l'Abbaye winner Imperial Beauty from the family of Jan Vermeer. "This is a well-known family in France, and she's an extremely good-looking filly," O'Connor said. "A lovely, well-balanced, quality filly, very sweet, and I think the sire has made a good start."

All in all, it is a draft of very uniform characteristics: all out of young mares, with one second foal and four first foals, and all born in either January or February. "All the mares could run, which would be typical enough of our policy," O'Connor said. "We're going there with plenty optimism."