Skiffington snaps up daughter of Banks Hill for 775,000gns

Replete is from the family of blue hen Hasili 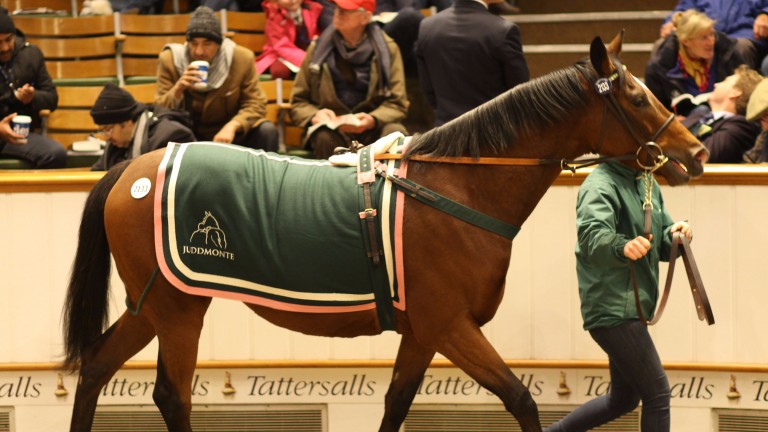 A rare offering from Juddmonte's famous Hasili family dominated proceedings at Tattersalls December Mares Sale on Wednesday when snapped up by Amanda Skiffington for 775,000gns.

The Makfi filly Replete, a daughter of champion Banks Hill, was only the second granddaughter of Hasili to be ever catalogued at public auction by Juddmonte and duly attracted a host of interested parties, notably American agent Justin Casse, who threw in an opening bid of 100,000gns, and Kentucky breeder Greg Goodman of Mt. Brilliant Farm, whose determined effort fell short to only the winning bidder.

Skiffington was unable to divulge the identity of her client although did concede that the unraced three-year-old would suit Galileo down the line.

"She was absolutely the best horse of the day," said Skiffington. "It's a fantastic family and I thought she was a beauty."

The unraced Replete is out of the brilliant Banks Hill, a sister to Dansili, Cacique and Champs Elysees whose victories included the Coronation Stakes, Prix Jacques les Marois and Breeders' Cup Filly & Mare Turf. Banks Hill has since made her mark at stud as the dam of Prix Jean Romanet winner Romantica and Listed winner Ideal World, who has gained further notoriety in South Africa as the sire of Group 1 winner Smart Call.

They included Megaron, a Dansili sister to Supreme Stakes winner Stronghold and Listed scorer Convey for whom Jono Mills of Rabbah Bloodstock signed at 200,000gns.

"She's a lovely filly," said Mills. "It's a beautiful page. We haven't looked at matings yet and this will be one that'll be decided by Sheikh Juma Dalmook al Maktoum."

"She'll go to Al Kazeem," said Tim Lane, stud manager of Oakgrove Stud. "We're big fans of Oasis Dream mares and she's a nice physical, very athletic. It's just a great family and there's a bit of speed in there at the bottom too."

Her price was also matched by Sandstone, a Dansili daughter of the Group 1-placed Helleborine who is set to start her stud career at Anthony Penfold's Bugley Stud in Dorset. Placed twice in four starts for Criquette Head-Maarek, Sandstone is the first foal out of her dam, who won the 2010 Prix d'Aumale and is a sister to Group 1-winning sprinter African Rose, in turn the dam of this season's Princess Margaret Stakes winner Fair Eva.

Newsells Park Stud, meanwhile, snapped up Birdwood, a half-sister to Monday's impressive Newcastle winner Enable, for 150,000gns with an eye towards sending her to their resident sire Nathaniel. Enable is one of a number of promising juvenile prospects from the first crop of Nathaniel, who is due to stand for £17,500 next year.

"John Gosden feels that Enable might be quite useful and so do the team at Juddmonte," said Newsells' general manager Julian Dollar. "So that's the appeal and this filly will probably go to him.

"Nathaniel has a number of promising horses in the pipeline and we're very keen to support him."

Another memorable day for Boocock

Earlier in the day, this year's Coral Distaff winner Light Up Our World provided her breeder Derek Boocock with a tremendous return when sold through Overbury Stud for 420,000gns to Kern/Lillingston Association on behalf of Charles Noell's and John Moore's Merriebelle Farm.

Boocock paid just 25,000gns for her dam Shine Like A Star at the 2009 Tattersalls December Sale, a move which initially proved inspired when she foaled the Group 3-placed Light Up My Life, who sold at the end of her racing career for 425,000gns to Al Shaqab Racing.

Light Up Our World has been a tough and consistent performer for Boocock and Richard Hannon, winning two races and filling the frame in four Group races including the Fred Darling and Prestige Stakes. The Zoffany filly could yet try for further success in the US.

"Plans are open," said Luke Lillingston. "She could be retired to stud or she might be one to race on in America. She goes on a variety of ground, vets well and stays a mile and eighth so she could be one for the US.

"I was underbidder to Philippa Cooper on [granddam] Fallen Star and have been cursing my luck ever since! It's a good family and I like Zoffany - I bought his first stakes winner Argentero, so we've done well with him."

Oxx to sparkle his dust on Flying Fairies

A return to training definitely beckons for recent Listed winner Flying Fairies, who will join John Oxx after selling to the trainer for 280,000gns on behalf of an undisclosed Irish owner.

The daughter of Holy Roman Emperor has been particularly progressive this season for Joseph Murphy and recently ended her season on a high when lowering the colours of Zawraq in the Trigo Stakes at Leopardstown.

"She's for an Irish client and hopefully she'll provide a bit of fun next season," said Oxx. "She's a steady improver - her last run was her best one. She's had a long season so she will have a break and we will look for something in the spring."

The final session of the Tattersalls December Mares Sale starts on Thursday at 9.30am