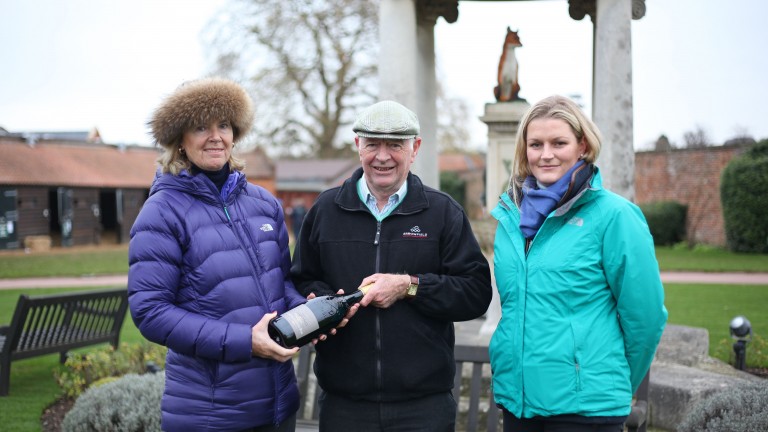 Amanda Skiffington (left) with Geoffrey Howson and her assistant Philippa Mains
Laura Green
1 of 1
By James Thomas 11:31AM, NOV 24 2016

It is the third time in the last five years Skiffington has won the award, after 2012 and 2014.

Skiffington's purchases have gone on to make a big impact in a number of European Classics, with Galileo Gold claiming the 2,000 Guineas and St James’s Palace Stakes, Hawksmoor winning the German 1,000 Guineas and Architecture finishing runner-up in both the Epsom and Curragh Oaks.

Those top-class performers are accompanied by the progressive three-year-olds To Be Wild and Wall Of Fire on Skiffington’s lengthy list of successes.

“I’ve always admired the hard work Amanda and her team put in at the sales, particularly at the yearling sales. She’s always well rewarded every year with these brilliant winners,” said Howson.

Howson also revealed that this would be the last occasion he would be presenting the award after taking the decision to step down from the post after 15 years service.

“We all owe Geoffrey a huge thank you,” said Skiffington. “With any committee like this you get very little thanks but you do an awful lot of work. And it should be mentioned that his team [with Matt Houldsworth] would have finished second in the competition this year with Quiet Reflection.

"I would also like to thank my team - they work very hard and it would be impossible to get around all the sales without them. I’ve got a few nice horses to come through next year and it would be nice if Escobar followed in Galileo Gold’s footsteps.”

A new chairman of the Federation of Bloodstock Agents will be appointed at a later date.