James Thomas reports from an eventful session at Goffs UK 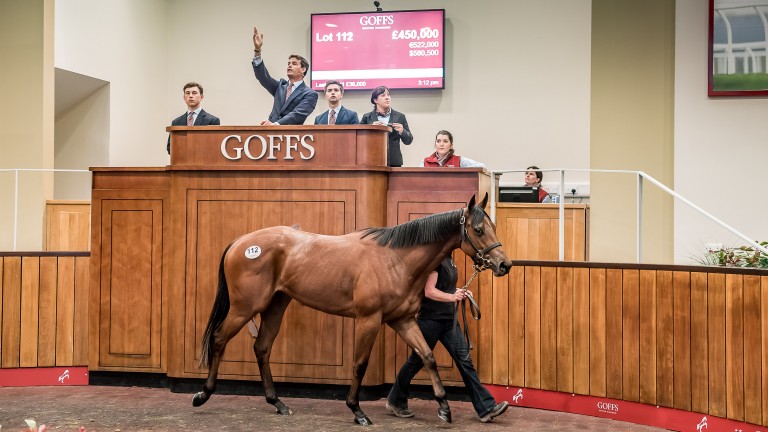 They say that good things come in small packages, and that proved to be the case at the Goffs UK Breeze-Up Sale in Doncaster on Thursday as a diminutive daughter of Siyouni smashed the auction record price when going the way of Anthony Stroud for £450,000.

That sale rewarded a bold pinhook by the Longways Stables team of Mick Murphy and his fiance Sarah O'Connell, who bought the filly for £95,000 at last year's Goffs UK Premier Yearling Sale.

"Shell shocked," were the only words Murphy could muster when first asked for his reaction. "I didn't see it coming. She's been very popular and is by a popular sire, and all the right people have been on her for the last two days. But I didn't see that coming."

Murphy might not have foreseen the filly's sale-topping price, but no one had missed her during the breeze, during which she clocked some blistering sectional times.

Daniel Creighton was among those to make an early play for the filly, but matters boiled down to a straight duel between Stroud - accompanied by Simon Crisford, who will now take charge of the youngster - and the underbidder who was concealed in the Blandford Bloodstock office.

"She's been bought for Sheikh Nasser Bin Hamad Al Khalifa," confirmed Stroud. "I liked the filly and Siyouni is a wonderful stallion, but now she needs to go out and run.

"We had a nice winner for Sheikh Nasser recently with El Gumryah. It's a lot of money, but let's hope it's worth it."

This is not the first occasion that the progeny of Siyouni have done the Longways team a good turn, as Jersey Stakes winner Le Brivido ranks among the outfit's past graduates. The filly is the second foal out of Fig Roll, a daughter of Bahamian Bounty who won the 2013 Listed Empress Stakes for Richard Hannon. The dam is also out of a Listed-winning juvenile in Cake. 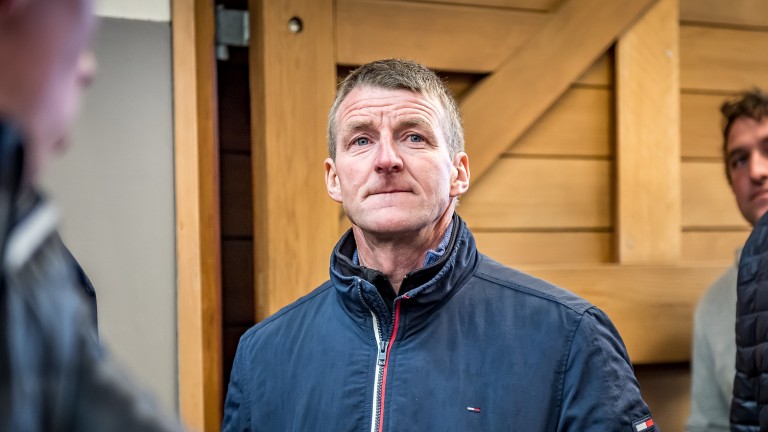 Mick Murphy: "We're massive fans of Siyouni"
Sarah Farnsworth
"We're massive fans of the sire," continued Murphy. "We've had Siyounis every year since his first crop and they'e been very lucky for us. She looked very racy as a yearling, albeit she was small, but then she's from a small family; Fig Roll was small and so was the granddam Cake.

"At the time £95,000 looked a brave shout for her, and if she wasn't by Siyouni I probably wouldn't have done it. I thought she might double her money and a small bit more because all the good judges were on her - there was talk that she'd top the sale - but we did not see that coming."

Goffs UK: Sarah O’Connell of Longways Stables leads the £450,000 Siyouni filly back to her stable pic.twitter.com/DwfR29FHyn

The windfall will go a long way to funding some significant changes in the lives of Murphy and O'Connell, who have recently moved to a new property and are due to tie the knot in the coming months.

"We built a brand new yard last summer and we're getting married in July, so we've spent a lot of money recently," said Murphy. "We're just half a mile from the beach in Ardmore, County Waterford. This filly was actually at the beach last week."

As is the norm for this kind of sale, the upper end of the market proved in rude health and the second-top lot, a Kingman colt offered by Brendan Holland's Grove Stud, went the way of Richard Brown of Blandford Bloodstock for £230,000.

"He's come from a very good vendor, I've been trying to buy a horse off him for a while but it just hasn't really happened," said Brown. "He's a son of Kingman, who looks like being a very special stallion."

While breezing quickly can often lead to success in the ring, Brown said this colt's performance was one of potential rather than pure speed.

"He certainly wasn't the fastest in the breeze, I bought a couple earlier who were far faster, but they're bred for five furlongs," he said. "I think this is a mile and a quarter horse, but he showed enough speed at the end of his breeze to think that he's got gears. I think ten furlongs will be his game and his pedigree would certainly lead you to think that.

"This is the kind of horse we'll give plenty of time to; he'll be let down for a month now and be brought back with a view to running in the autumn and being one for the future. He's been bought for an existing client."

The colt, the second foal out of the Dalakhani mare Amarillo Starlight, was signed for by McKeever Bloodstock at last year's Goffs UK Premier Sale at £62,000. He shares his page with the likes of Pilsudski and Youmzain.

One of the mostly highly touted lots of the sale was the son of Malibu Moon offered by Tom Whitehead's Powerstown Stud, and the whispers proved well-founded when the colt was knocked down to Karl Burke for £220,000, equalling the top price at last year's sale.

"He's for Carl Waters," said Burke, who acquired his star filly Quiet Reflection from the Powerstown draft at the 2015 Doncaster breeze-up. "He's had horses with me before and rang recently saying he would like some more.

"This is a lovely colt and Tom does them very well. This is a colt with tremendous resale value. Even if he wins a maiden, there's another market to him with the dirt element to his pedigree - having said that, he looked to go over the grass well yesterday."

The colt was bred by Three Chimneys Farm and is out of the Group 3-placed Contentious, a granddaughter of the Phipps family's champion mare Inside Information.

He is also a half-brother to the dam of Kessaar, who wasn't even on the page when Whitehead selected the colt at the Keeneland September Sale but went on to land the Sirenia Stakes just days after the transaction before claiming the Mill Reef Stakes.

"He's a lovely colt and he vetted very well when we bought him over in Keeneland in September, and those ones are hard to buy," said Whitehead, who pinhooked the colt for $50,000. "We were lucky that Kessaar came along and won the Mill Reef after we bought him.

"He's been straightforward the whole time and he's been very busy here, we've had loads of vets. Karl bought Quiet Reflection off me so hopefully this one will be as good."

Action among this year's first-season sires is starting to hot up, with Ivawood and Supplicant both supplying their first winners on Beverley's Thursday's card. Another who is already off the mark is Highclere Stud's Cable Bay, and the son of Invincible Spirit enjoyed a good result in the Doncaster ring when Ross Doyle went to £200,000 for the colt offered by Willie Browne's Mocklershill.

"We thought he was the standout colt in the sale," said Doyle. "He did a very nice breeze, has a good action and showed a good attitude.

"Obviously he comes from an extremely good home, Willie has been in this business for a very long time and we've bought Group 1 winners from him at the breeze-up sales before - the likes of Ventura Storm and Emerald Commander. The stars aligned and the client was happy to push the boat out to buy a nice horse."

The colt, a £38,000 pinhook by JB Bloodstock, is out of the unraced Exceed And Excel mare Alzahra, who is from the further family of Anglo-Irish 1,000 Guineas heroine Attraction.

"He'll go to Richard Hannon for an established client," added Doyle. "Richard's very happy with a couple of the Cable Bays he has. He's got Separate, who was second to the good Gleneagles horse of Paul Cole's [Highland Chief], and he thinks she's well above average."

It was rather all or nothing for pinhookers, but among those to enjoy a real touch was Michael Murray of Hardwood Stud, who supplied the session's first six-figure lot. Blandford Bloodstock's Richard Brown signed the docket for the £130,000 Acclamation colt, who had been pinhooked for a mere 4,500gns at Book 3 of the Tattersalls October Yearling Sale.

"He's always shown me ability all the way along," said a thrilled Murray. "I was never too hard on him, it was all raw talent. He showed that out on the track yesterday and I've had huge footfall since, so things just went my way.

"I'd had plenty of interest and plenty of people asking the right questions, so I knew he'd make fifty or sixty grand and anything after that I was happy with. I'm thrilled how far it kept going - he's a beautiful horse."

Murray prepares "five or six" breezers each year at Hardwood Stud, but brought just the solitary lot to Doncaster after the withdrawal of his Footstepsinthesand colt. Past graduates include the likes of Stone Of Destiny, Normandy Barriere and Anticipated.

"I had to withdraw the other horse I had here but this result definitely helps get over that setback," he said. "I'm based in Galway in the west of Ireland and I've been doing the breezers for about 15 years. They've been good to me, and I was informed today that I'm ten per cent stakes performers to horses I've sold, which is very high.

"I ride all the horses myself. I think they get a good grounding at my farm and they go on to be good horses."

The colt, who will now carry the colours of Sheikh Juma Dalmook Al Maktoum, is out of Tonle Sap, a Manduro half-sister to the prolific Dunelight.

Richard Brown signs the docket for the £130,000 Acclamation colt
Sarah Farnsworth
"He's very typical of the sire and did a very good breeze," said Brown. "I bought a good Acclamation off Michael at the Guineas Sale two years ago, Stone Of Destiny, who was fourth in last year's Commonwealth Cup. This colt also came highly recommended.

"Sheikh Juma will be in Newmarket for the Guineas, he'll have a look at all the horses then and decide where they'll go to be trained."

Trade exhibited some notable peaks and troughs throughout the session, but by the time the final lot had exited the ring the sale could boast a record average.

"We came into today's sale confident we had a good catalogue following our decision to reduce the numbers and focus on quality, and to achieve a new record average and top price is very pleasing," said Goffs UK managing director Tony Williams.

"We have been well supported by our consignors who sent us a superb line-up of horses and demand from buyers from around the world meant we have been able to achieve some outstanding prices.

"Longways Stables' £450,000 Siyouni filly will stand out as a highlight for some time as not only being a new record for this sale, but the joint second-highest priced horse ever sold at Doncaster and the highest-priced Flat horse sold in the company’s 57-year history."