Figures for the session on a par with last year 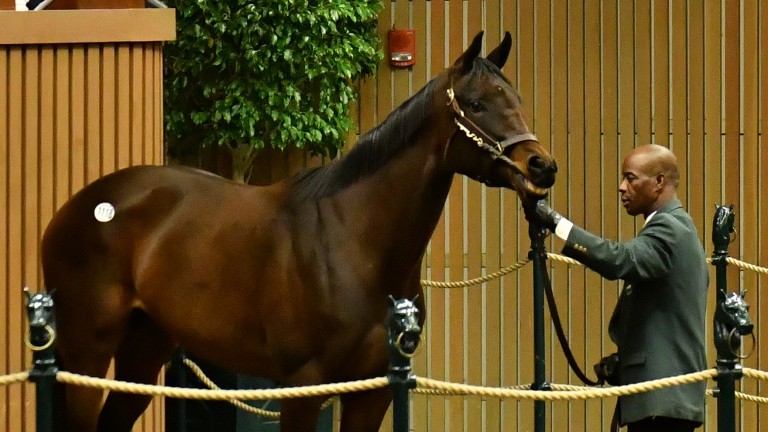 Fifth And Madison: one of two mares to sell for more than six figures
Keeneland Photo
1 of 1
By Ron Mitchell of Blood-Horse 1:35PM, JAN 12 2017

As the Keeneland January Horses Of All Ages Sale moved into Book 2 during the third session on Wednesday, the lesson to be taken away was the same as during the first two sessions: quality sells.

The third session finished virtually unchanged from the comparable day a year ago but is down significantly from last year through the first three days.

From 1,174 cataloged, 299 horses have been withdrawn, with the 294 vendor buybacks representing 34 per cent of the total through the ring.

Two mares sold in excess of six figures on Wednesday, the same as a year ago.

Fifth And Madison, a winning four-year-old daughter of Street Sense, topped the session when sold for $135,000 to Mayday Branham, with Doug Branham signing on behalf of his Hurricane Hills Farm.

Consigned by Taylor Made Sales Agency, Fifth And Madison is a half-sister to stakes winners Fordubai and Fast Alex, and was purchased by Starlight for $250,000 from the Gainesway consignment at the 2014 Keeneland September Yearling Sale.

The day's second-highest price of $125,000 was fetched by Bubbles And Babies, a six-year-old A.P. Indy mare acquired by Canadian-based Josham Farms.

Consigned by Catherine Parke's Valkyre Stud, the mare was in foal to Street Boss. Produced from the Grade 1 Alcibiades Stakes winner Dream Empress, Bubbles And Babies was a $335,000 Keeneland September yearling purchase in 2012.

"She's a beautiful mare and we're very happy to have her, although she is a little more expensive than we thought she would be," said Josham's Ted Burnett, who said she was the first horse they acquired during the sale. "We're looking for mares and this is the first one in the price range we wanted to buy in with the pedigree we're looking for."

Burnett said the mare will be shipped to Ontario to foal and then will return to be bred to a Kentucky-based stallion.

Parke said the mare was being sold because the breeder owns the dam and a half-sister.

"She checked all the boxes. She had the pedigree, had the physical ... she's by A.P. Indy," the consignor said.

Hunter Valley Farm sold the two highest-priced yearlings during the session, with an Orb colt bringing $95,000 and an Awesome Again colt going for $80,000.

The first foal out of The Best Option, daughter of Pleasant Tap, was an Awesome Again colt bought by Mary Sue Stables bred by Dennis Crooks, Terry Young, and Adena Springs.

With 36 horses sold for $812,700, Taylor Made was the session's leading consignor. Trainer Keith Desormeaux bought five for $179,000 to top the buyers' list. The leading covering sire, with three mares selling for $161,000, was Verrazano.

Topic of overproduction under discussion

Geoffrey Russell, Keeneland's director of sales operations, said: "That is where everybody is at the moment. It is an expensive business to be in, so people are tending to gravitate to less numbers and higher quality. It's been the theme during this sales season."

"As breeders move their programs to the upper end of the market, there is less demand for the horses that are being offered in lower price ranges. As a result, many breeders will assess their portfolios and decide whether some mares should be taken out of production or they should breed to race rather than sell.

"We're going through a cycle at the moment that we all need to take note of. I think people will be evaluating their breeding stock before the 2017 breeding season and deciding if they need to breed the mares or not. Or if you are going to breed, breed to race.

"There is no harm in breeding to race. Racetracks are looking for horses every day, so breed to race. Just because you breed a horse does not mean it needs to come to a horse sale. People need to understand there are certain horses that are sales horses and do very well at sales and there are certain horses that aren't commercial product but still can race very successfully.

The sale continues through until Friday, with daily sessions beginning at 10am.