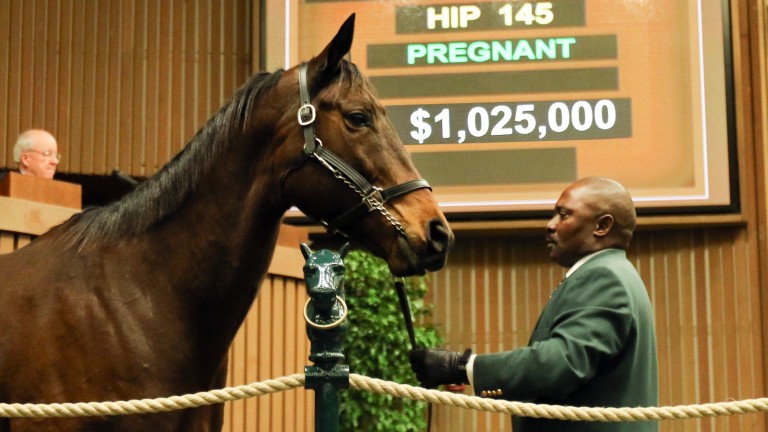 A paucity of well-bred mares or racing prospects and no dispersal to drive buyer interest led to broad declines during the opening session of the Keeneland January Horses Of All Ages Sale in Lexington on January 9.

The 2016 first session was highlighted by the dispersal of the Sarah J. Leigh Estate, with six offerings grossing $2,095,000.

Geoffrey Russell, director of sales operations at Keeneland, said the results were "disappointing" but not altogether surprising.

"The January Sale - it's called the Horses Of All Ages Sale for a reason - you have mares, foals, everything. Some years we are fortunate enough to have a dispersal like we did last year. But again this year, quality sells. We had a million dollar mare on Monday, which we haven't had for a while at the January sale and a $700,000 mare right after. So the quality offering brought top dollar."

One factor in the lack of depth on Monday was the withdrawal of several attractive racing or broodmare prospects precluded from being shipped to Keeneland because of restrictions placed on horses at Fair Grounds racecourse recently.

The New Orleans track is under quarantine due to an outbreak of equine herpes virus and an embargo was imposed on horses that had been at Fair Grounds after December 10 from shipping to any Kentucky track, which included the Keeneland sales grounds.

"There were two mares that should have sold today that couldn't come to the sale because of the equine herpes virus outbreak," Russell said. "They were probably the third or fourth nicest horses that could have been in today, so we certainly missed them."

"The market is not what it was, even at this sale," Taylor said. "There was not enough quality to bring buyers in here. I don't know, maybe it's because they filled all their orders in November. But this is a buyer's market. I think if somebody wants a good deal, they should be here."

Taylor said the top horses sent through the ring by Taylor Made did not generate a lot of demand, with most bringing prices at the low end of their estimated values.

Siren Serenade (Lot 145), a daughter of Unbridled's Song who was the only mare in the sale in foal to leading sire Tapit, topped the session at $1,025,000.

With Reiley McDonald of Eaton Sales signing the ticket, the 11-year-old mare was bought by Don Alberto Corporation from the Hill 'n' Dale Sales Agency consignment.

Produced from the four-time Grade 1 winning mare Versailles Treaty, Siren Serenade is a half-sister to Grade 1 winner George Vancouver and to Grade 2 winner Saarland. She is also the dam of 2015 Santa Anita Oaks runner-up Luminance, a daughter of Tale Of The Cat bought by Don Alberto for $1 million from Hill 'n' Dale at last year's Fasig-Tipton Kentucky Fall Mixed Sale.

"We've always had some good horses that show up in January for one reason or another, and sometimes they do a little better here because they stand out more," McDonald said of the mare. "She would have been very competitive in November. I know Don Alberto is very happy to have her.

"There's nothing like her in the sale and Don Alberto is playing at the highest end of the game, so it was just a perfect mare for them."

Bred in Kentucky by Cynthia Phipps, Siren Serenade was purchased by Blandford Bloodstock for $300,000 at the 2012 Keeneland January sale while carrying Luminance.

Hill 'n' Dale's John Sikura said the timing of a mare like Siren Serenade in foal to Tapit going through the ring Monday could not have been better.

"She's a lovely individual who produces really good foals," Sikura said. "She is in foal to Tapit, so you would have to think she has the requirements that breeders are looking for. This was the year to either sell her or keep her. There is reason to own her but the reason to sell her is to provide cash to pursue other opportunities. We are happy with the price. She's a million-dollar mare and that is what she made."

On Sunday, a day before the sale began, Don Alberto Stable's Unique Bella, a daughter of Tapit who broke her maiden more than ten lengths, cruised to victory in the Grade 2 Santa Ynez Stakes at Santa Anita Park.

"It couldn't have been more timely," Sikura said of the sequence of events. "She was a premier mare in a sale that does not have a lot of premier horses. She was well-bought."

Delightful Joy snapped up by Aboughazale

The day's second-highest price of $700,000 was paid by Oussama Aboughazale's International Equities Holding for Delightful Joy, an attractive chestnut daughter of Tapit.

"She's just a really, really nice filly," said Frances Relihan, who signed the purchase ticket, adding that the mare will be bred to War Front. "Great range, great scope, good race filly, she's from a really strong family. We're looking at a broad range of mares at this sale."

Relihan said Aboughazale purchased a farm in Bourbon County for Sumaya US Stable and is buying mares to breed to his stallion Prontonico.

The top price for a just-turned yearling was the $185,000 winning bid of Machmer Hall for an Into Mischief filly from Taylor Made.

The filly was bred in Kentucky by Fred W. Hertrich III and John D. Fielding and was produced from the unraced Trippi mare Anna Sun.

"I thought she was exceptional," said Machmer Hall's Carrie Brogden. "With what Into Mischief has done, he is an overachiever. I have seven mares in foal to him and are going to breed 16 to him this year. He has just had runner after runner. They are sound and great-minded. They want to train and they're fast."

Taylor Made was the session's leading consignor with 36 lots sold for $3,652,500. International Equine Equities was top buyer with seven lots purchased for $1,171,000.