Sire talent showcase highlights how much Ireland has to offer

Those on show included Sea The Stars and Galileo 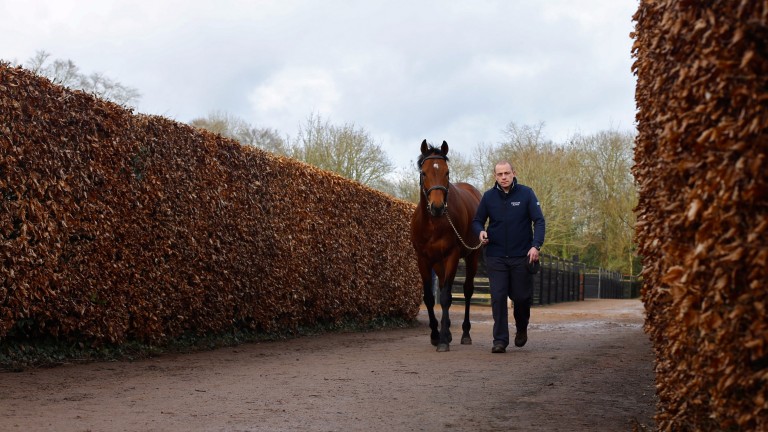 The Gurkha: dual Group 1 winner was among the highlights of the Coolmore stallion roster
Amy Lynam
1 of 1
By Martin Stevens 7:57PM, JAN 30 2017

On the weekend Donald Trump's executive order to impose a travel ban on those from certain countries caused chaos and consternation, the advantages of an internationalist outlook were advertised by Irish stallion masters as they threw open their gates to locals as well as visitors from around the world - including a busload of breeders from Mongolia.

Friday and Saturday marked the third year of the Irish Thoroughbred Marketing Stallion Trail and the vibes from many of the participating stud owners and managers suggest the initiative has come of age, as many reported they had struck deals. Not that the Stallion Trail exists solely for nominations to be sold; most appreciate it is a chance to engage with the local community, welcome racing fans and generally try to create positive feelings for Irish bloodstock.

The Mongolian delegation was joined by parties from France, Germany, Italy, Switzerland and further afield, while plenty of Brits crossed the Irish Sea as well.

Nearly all of them must have visited the Aga Khan's Gilltown Stud in County Kildare, as at times there were queues outside the reception marquee. The box office draw was the father-son team of Derby winners Sea The Stars and Harzand, the latter just settling into his second career. Therein lies an irony of the current state of the bloodstock market: while it was two middle-distance stars who drew the crowds, the Aga Khan Studs feel they have had to give Harzand a low introductory fee of just €15,000 to draw breeders.

Middle-distance horses and stayers are often the ones who capture the public imagination on the Flat and yet there appears to be not enough call for them in the sales ring for breeders to shift their focus from producing sharper, speedier stock who owners will see on the track sooner. Industry plans to stimulate demand, which should include a process that will mitigate the extra costs to owners of waiting for their more stoutly bred horses to show their best, are much needed.

One middle-distance sire who does of course rule the ring is Galileo, a half-brother to Sea The Stars. The Coolmore phenomenon is one year off turning 20 and although he is still hale and hearty, thoughts are turning towards who his successor will be. There would be worse bets than his new studmate The Gurkha, winner of last year's Poule d'Essai des Poulains by a street and from a stallion-making family.

Australia is another worthy heir to Galileo. He is still a brilliant Derby winner, still out of Ouija Board and still a stunning physical specimen – and yet in his third season at Coolmore his fee has been knocked down to €35,000 from €50,000. That could be a bargain.

Irish breeders ought to erect an enormous monument to Urban Sea, the dam of Galileo and Sea The Stars, for her contribution to the industry. But the Stallion Trail served as a reminder there is another mare who is becoming deeply influential in the country.

Rafha won the Prix de Diane three years before Urban Sea landed the Prix de l'Arc de Triomphe but she has taken a little longer to take root in the stallion ranks. The daughter of Kris is the dam of Irish National Stud kingpin Invincible Spirit – who looked in outstanding condition for 20 years old at the weekend – and Tally-Ho Stud stalwart Kodiac, a renowned source of two-year-old talent and sprinters.

Three sons of Kodiac retired to stud in Ireland this year – Coulsty at Rathasker, Kodi Bear at Rathbarry and Prince Of Lir at Ballyhane. All came up in conversation among breeders on tour as popular choices to use this year.

Rathbarry also has a new son of Invincible Spirit in Gimcrack Stakes winner Ajaya, a relation to Bated Breath who will be supported by owner-breeder Blue Diamond Stud. Either Ajaya or Kodi Bear look well capable of following in the footsteps of the Cashman family's previous leading first-season sires Kampala, Alzao, Taufan and Acclamation.

There are also echoes of Rafha at Ballylinch Stud, home of Invincible Spirit's son Lawman, who might not quite get the credit he deserves for his uncanny knack of producing a top-notcher – see Harbour Law, Most Improved and Just The Judge for proof.

Dual Group 1 winner Make Believe, raced by Rafha's owner-breeder Prince Faisal and entering his second season at the stud, is letting down into an oil painting of a stallion. He will cover Rafha's final foal Affectionately this year.

The stud's two new recruits New Bay and Fascinating Rock looked the part too, with Fascinating Rock another example of a top middle-distance talent available at an enticing opening price – just €10,000 for the son of Fastnet Rock.

Hopefully the Irish National Stud will find a son of Invincible Spirit to continue the line, having come close to securing several but not having quite clinched one yet. There are other attractions on the roster, though, of which the handsome Elusive Pimpernel, the well-supported Gale Force Ten and the top-class Free Eagle are just three.

Tally-Ho Stud has not yet stood a son of Kodiac, either, but if new boy Mehmas, a precocious son of Acclamation, does not emulate his established studmate by supplying a glut of juvenile winners and speedsters it would be a big surprise. The other new face at the Westmeath stud, Vadamos, was, by common consent, one of the best lookers on the Stallion Trail.

The growing Darley roster at Kildangan Stud is the home of two new sharp, speedy and tough types in Buratino and The Last Lion, as well as a champion two-year-old who grew into a top miler in Belardo.

It was a privilege to see Shamardal, whose services will be restricted exclusively to Maktoum family-owned mares for the second season this year, and Exceed And Excel, one of the hardest workers in the industry worldwide having shuttled between Australia and Europe for 26 consecutive seasons.

Cape Cross was doing his best Greta Garbo impression at the weekend but, as he is the source of Golden Horn, Ouija Board and Sea The Stars, we can allow him a little crankiness in his twilight years and, even though we could not see him, it was great to see his outstanding work at stud commemorated by his new statue at Kildangan and the Cape Cross centre, opened in November 2015.

The Derrinstown Stud roster has been reinvigorated by the addition of two exciting new stallions, one of them another fine talent by Cape Cross. The fact that last year's Irish 2,000 Guineas hero Awtaad has been well oversubscribed for weeks tells you all you need to know about his jaw-droppingly good looks, while Markaz has not exactly been struggling for support either, as an attractive Dark Angel brother to Mecca's Angel who mixed it with the best sprinters himself.

Derrinstown Stud general manager Stephen Collins spoke about some of the gathering clouds over the Irish bloodstock industry in his speech as Irish Thoroughbred Breeders' Association chairman at the organisation's awards on Saturday; how work must be done to ensure a hard Brexit will not affect the freedom of movement of Irish horses and that breeders must assess the viability of their broodmare bands in the face of overproduction and a polarised market.

There are tough times ahead for Irish bloodstock, no doubt. But the weekend showed that the quality of horses and the welcoming and resourceful spirit of the people involved in it will ensure it remains the country's greatest export industry.

Quietly caught the eye of breeders by supplying a big haul of winners and five stakes performers in his first crop of two-year-olds last year. There appears to be some momentum behind the son of Kyllachy.

A son of a sire who is a growing force in the jumps sphere and, importantly, one with an excellent temperament. The Irish Derby hero has his first four-year-olds on the ground and will be worth keeping an eye on.

With all the fanfare for Frankel last year, it should not be forgotten that Sir Prancealot was the leading freshman by number of winners and progeny earnings. Trainers will be fans as his stock are easy to work with and get on with their jobs early.

FIRST PUBLISHED 7:57PM, JAN 30 2017
Irish breeders ought to erect an enormous monument to Urban Sea, the dam of Galileo and Sea The Stars, for her contribution to the industry