Sire of September could make a deeper impact at Coolmore 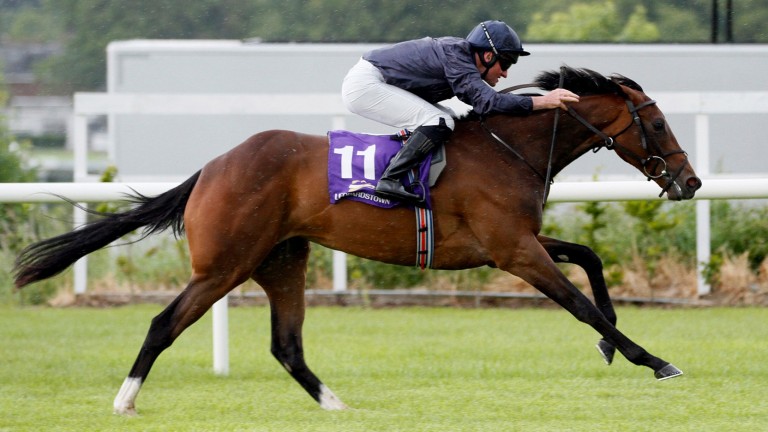 September: daughter of Deep Impact put in a dazzling debut at Leopardstown
CAROLINE NORRIS
1 of 1
9:26AM, JUN 11 2017

One swallow does not make a summer, and one September might not make Coolmore adjust their stance on developing sire lines.

But the two-year-old filly's dazzling debut for Aidan O'Brien at Leopardstown on Thursday does make you wonder whether, assuming she is the exceptional performer that effort suggested she was, the operation might become more heavily involved with her sire Deep Impact in future, having only flirted with using the champion Japanese stallion in the past.

Deep Impact, an outstanding champion at three and four in his native Japan, demonstrated early in his stud career that he was effective in Europe when Beauty Parlour, a filly from his second crop, landed the Poule d'Essai des Pouliches five years ago.

The Wildenstein family, who supported the horse at Shadai Stallion Station from the outset, also campaigned Beauty Parlour's year-older brother Barocci, who won the Listed Prix Omnium at Saint-Cloud, and Aquamarine, who scored in the Group 3 Prix Allez France.

The Wertheimer brothers have also got in on the act, with Akihiro, their homebred colt by Deep Impact, having finished placed in two key French Derby trials this season.

Then there are the Japanese raiders who have struck in France in pursuit of the holy grail for the country's owners and trainers: victory in the Prix de l'Arc de Triomphe, a race in which Deep Impact himself finished third. Sons Kizuna and Makahiki both defeated high-class home opposition to win the Prix Niel but were unable to reach the places in the big race itself.

The cream of the European talent pool has also, of course, regularly been beaten by progeny of Deep Impact in elite international turf contests: by Gentildonna, Real Steel and Vivlos at Meydan; and by A Shin Hikari in Hong Kong and, most memorably, in our own back yard in the Prix d'Ispahan at Chantilly last year.

No doubt about it, Deep Impact is an outstanding sire the world over.

More European owners have cottoned on, with David Redvers having bought a number of the sire's progeny at the sales in Japan including New World Power, the 260 million yen (£1.6m/€2.1m) top lot out of Fillies' Mile heroine Listen at the JRHA Select Sale in 2014.

Coolmore themselves have, so far, only dipped their toe in the water when it comes to Deep Impact, having sent three mares to him in 2013 – Group 1 heroines Maybe and Peeping Fawn plus Cherokee, a Group 3 winner on her two-year-old debut.

The resultant three-year-olds have been slow to come to hand, with Pavlenko, the filly out of Maybe, having finished third in a Leopardstown maiden last month, and Wisconsin, the colt out of Peeping Fawn, having scored in a Tipperary maiden in recent weeks.

The same mares visited Deep Impact again in the following year and Wisconsin's sister September, who immediately attracted quotes for next year's 1,000 Guineas after she had sauntered past the finishing line at Leopardstown, resides at Ballydoyle alongside unnamed colts out of Cherokee and Maybe.

Coolmore's MV Magnier made a first trip to the JRHA Select Sale last year accompanied by the operation's Dermot Ryan and David O'Loughlin but, unusually for such an aggressive buying power, came away empty handed having come off second best to local interests on a Deep Impact colt foal out of Poule d'Essai des Pouliches heroine Elusive Wave.

September is, for all her thrilling potential, still only a maiden winner so it might seem like jumping the gun to suggest that Coolmore might be about to double down on Deep Impact simply because of her. But several other factors are at play that could lead you to think the Lads might just do that.

It will not have escaped their notice that the usually prescient John Messara has teamed up with Shadai to shuttle three Japanese stallions to his Arrowfield Stud in the Hunter Valley this year - including two sons of Deep Impact in Mikki Isle and Real Impact - as an alternative to all the Danehill blood swilling around Australia. And, boy, could Coolmore do with a top-class, proven outcross for all the Group 1-winning Galileo mares they are accumulating.

There is also a grandson of Deep Impact's sire Sunday Silence doing extraordinarily well with his first two-year-olds in Europe this season. Former joint-champion juvenile Dabirsim, by Hat Trick, is now five winners from seven runners conceived at a fee of €9,000 in Germany.

There is enough evidence for Coolmore to take the plunge with Deep Impact even without September, but there is nothing like first-hand evidence of a sire's ability and if that filly marches on to greatness as her maiden win suggested she might, it would be no surprise to see the operation divert a few more of their top-class broodmares to be covered by the stallion in Japan, if logistics allow.

Their reconnaissance mission to the JRHA Select Sale in 2016 might also develop this year into a more full-blooded buying campaign.

The catalogue for next month's auction, released this week, is obviously full of pedigrees that would not look out of place in the blueblooded Ballydoyle battalion.

It lists 24 yearlings by Deep Impact, including colts out of top-level winners Champagne D'Oro, Fleeting Spirit, Listen and Samitar, a half-brother to Irish Derby runner-up Seville and a colt out of a three-parts sister to Derby hero Pour Moi; and 15 Deep Impact foals, among them colts out of Barefoot Lady, Contested and Elusive Wave as well as a rare jewel in a sister to Gentildonna.

It would be no surprise to see several lots like those say 'konnichiwa' to Tipperary.

FIRST PUBLISHED 7:05PM, JUN 10 2017
The usually prescient John Messara has teamed up with Shadai to shuttle three Japanese stallions to his Arrowfield Stud in the Hunter Valley this year