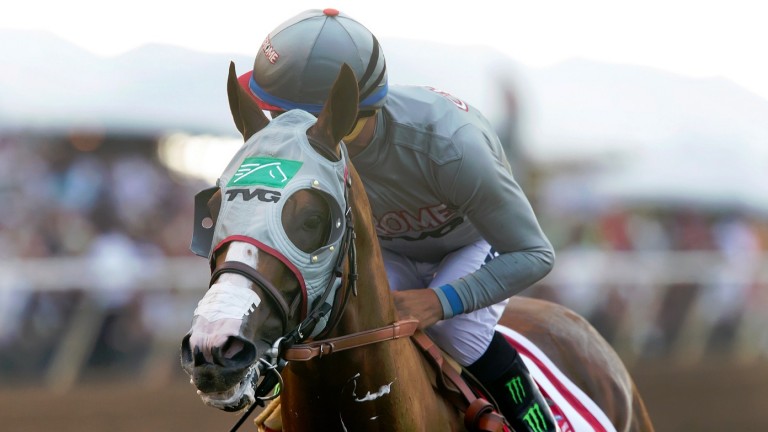 Lucky Pulpit, sire of two-time Horse of The Year California Chrome, died on Monday after suffering a heart attack while on covering duty at Harris Farms.

"He was the picture of health all day," said Dave McGlothlin, farm manager at Harris Farms. "He had a perfectly normal day. He and the teaser were talking smack to one another like they always did. We're all stunned."

The 16-year-old son of Pulpit and the Cozzene mare Lucky Soph was bred and raced by Larry and Marianne Williams, and entered stud at Harris Farms, California in 2007 on a fee of $2,500.

On the track Lucky Pulpit won three of his 22 career starts, with his biggest win gained in the 5f Smile Stakes on turf at Arlington Park at four, having finished third in a Grade 3 at two and second in a Grade 2 at three, accumulating $209,928 in prize money.

From seven crops of racing age he sired 148 winners, most notably seven-time Group/Grade 1 winner California Chrome - who himself retired to stud at Taylor Made Farm in Kentucky in late-January, and amassed progeny earnings of over $24 million.

“The California and national thoroughbred racing industry, where Lucky Pulpit has ranked at the top of the sire lists year after year with world class performers, will still have another three crops from this stellar sire yet to race,” added McGlothlin.

“Lucky Pulpit hit homerun after homerun with his offspring both in the sales ring and on the racetrack and from early on we had a glimpse of what he would become as a sire.”

FIRST PUBLISHED 10:44AM, FEB 14 2017
He had a perfectly normal day. He and the teaser were talking smack to one another like they always did. We're all stunned