Devil His Due also broodmare sire of Game On Dude 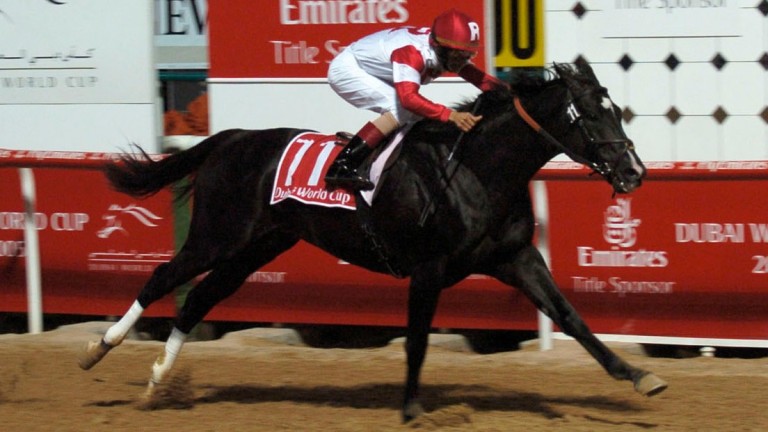 Multiple Grade 1 winner and sire Devil His Due was euthanised on Monday aged 28, due to infirmities of old age.

Devil His Due carried the colours of Lion Crest Stable to the winner's enclosure on ten of his 41 starts, earning just short of $4 million.

Considered one of the top handicap horses of his generation, he will also be remembered for a prolonged battle and dead-heat with Lure in the 1992 Grade 2 Gotham Stakes.

Bred in Kentucky by Peter E Blum, out of the Raise A Cup mare Plenty O'Toole, he entered stud at Margaux Farm in Kentucky in 1996.

From just 1048 foals in 18 crops, Devil His Due sired 40 black-type winners, including 2005 Dubai World Cup hero Roses In May and Alcibiades Stakes scorer She's A Devil Due.

His influence has also been felt as a broodmare sire, producing the dams of 20 stakes winners, including eight-time Grade 1 scorer Game On Dude.

He was pensioned from stallion duty following the 2013 breeding season, aged 24.

"Devil His Due was a truly great horse," said Margaux Farm general manager Michael Hardy. "He was the type of racehorse that anyone would want to own or breed. His soundness and resilience on the track was matched only by the tenacity that he instilled in his offspring. He will be missed by all here at the farm."

FIRST PUBLISHED 1:29PM, MAY 23 2017
His soundness and resilience on the track was matched only by the tenacity he instilled in his offspring