Joyfully, who topped the sale, to be bred to War Front this year 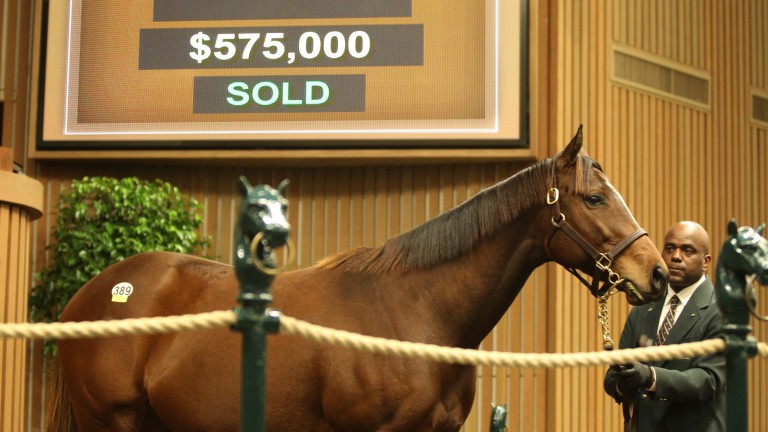 The second session of the Keeneland horses of all ages sale on Tuesday had more vibrancy than the preceding day's opener, but at the end of the day the results were the same, with significant declines in all key categories.

"Mixed sales are hard to compare from year to year or session to session," Geoffrey Russell, Keeneland's director of sales operations said, putting the numbers in perspective. "Anything that had perceived quality sold very well."

With the sub-freezing temperatures of the previous three days giving way to milder, albeit windy and wet conditions, on Tuesday, there were considerably more people on the sale grounds.

"It had a better feel today," Russell said of the atmosphere.

As the last public auction before the start of the North American breeding season, the January sale provides a marketplace for some breeders wanting to move mares or bring in fresh stock to their operations. Others use the auction to market broodmare or racing prospects that are well-bred or in foal to fashionable stallions that would otherwise would have been lost in the numbers at Keeneland's marathon breeding stock sale last November.

"There is value to be had because I think, in November, you had a larger buying base of people from around the world," she said. "When a lot of people reviewed the [January] catalogue, I think there were certain buyers that didn't come to the sale. So from our standpoint it has been good because there was less competition for those good mares. But you still have to pay for them."

Consignor Kerry Cauthen of Four Star Sales said the uptick in activity Tuesday could have been a result of breeders adjusting their expectations.

"I feel like today has been more in line with our thinking and part of that comes from maybe a first bumpy day and people realign their thoughts," Cauthen said."It's a typical January sale. When you bring up a good offering, it brings good money."

International Equities Holding, which purchased Delightful Joy for $700,000 on Monday, bought the day two top lot, going to $575,000 for Joyfully, a five-year-old daughter of Horse of the Year Mineshaft consigned as Hip 389 by Paramount Sales.

Joyfully, sold in foal to Triple Crown winner American Pharoah, is out of the winning Forestry mare Rejoicing and is a half-sister to Grade 3 winners Divine Oath and Auntie Joy.

Aboughazale said Joyfully would be bred to War Front this year.

"She [Joyfully] is just lovely and her foal looked very well," Aboughazale said. "I think it's a good buy."

Just before the mare went into the ring, her 2016 colt by Uncle Mo was hammered down to agent Mike Ryan, signing in the name of Key Palm Stable for $370,000.

"It was a great price for both mare and foal," said Paramount's Pat Costello. "They were two lovely horses. Her first foal, the Uncle Mo was a cracker. He is a beautiful, big walking horse so he deserved to bring that price. He vetted out perfect and is a good colt. And the mare was absolutely beautiful and when they produce that kind of a foal, you know they're a good mare.

"I think he's a classic, two-turn horse," Ryan said of the Uncle Mo colt, the second-highest price paid for a yearling during the sale. "I believe he will get a mile and a quarter. He was head and shoulders above the rest [of the Keeneland just-turned yearlings]. The stride on him is enormous. He gets over the ground so easily."

The day's second-highest price of $460,000 was fetched by Chocolate Pop (Hip 686), an 11-year-old mare in foal to Bernardini knocked down to Springhouse Farm from the Four Star offerings.

Airoforce, a Grade 2 winner who finished second in three graded stakes including the Breeders' Cup Juvenile Turf, was the Cuvee mare's first of four foals.

"She was the right kind," Cauthen said. "I think you could have seen anywhere between $350,000 and I wouldn't have been surprised at $500,000 or a bit more. It was just a matter of who decides to show up decide to compete. I saw a number of underbidders. It was a very fair and competitive market."

Late in the session, Ellen Charles went to $385,000 to acquire a Maryland-bred son of Uncle Mo in the name of her Hillwood Stable, the highest priced short yearling of the auction so far.

Consigned by Warrendale Sales as Hip 745, the colt is out of the winning Salt Lake mare Gone To Utah, whose six winners from as many foals to race include stakes winner Away We Go and three stakes-placed runners. He was bred by Nicewonder Stable.

Charles, accompanied by trainer Rodney Jenkins, said she came to the January sale specifically to buy a yearling and was pleased that she was able to buy a son of Uncle Mo.

"He is just a really beautiful colt," the owner said. "I wanted an Uncle Mo and he seems like the right one."

Jenkins said he was keenly aware of the colt's female family, noting he had trained all the stakes horses, except one, produced from Gone to Utah.

Warrendale's Kitty Taylor said the colt far exceeded his reserve price, mainly because he was a Maryland-bred and was bought by an owner who races primarily in that state.

FIRST PUBLISHED 12:00PM, JAN 11 2017
There is value to be had because I think, in November, you had a larger buying base of people from around the world