At The Sales NEW ZEALAND 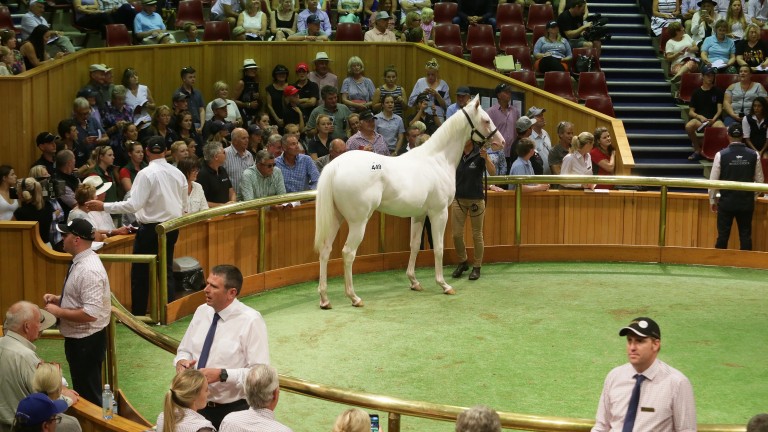 While world-class yearlings were going under the hammer at New Zealand Bloodstock’s Premier Sale on Tuesday, an intriguing side battle for leading vendor was taking place.

New Zealand’s most influential stud farms of Sir Patrick and Lady Hogan’s Cambridge Stud and Mark and Garry Chittick’s Waikato Stud each strived to sell their blue-blood yearlings to their maximum potential, the underlying crusade for overall honours made was a captivating race that wasn’t decided till more than an hour after legendary auctioneer Joe Walls brought his gavel down for the final time in a 45-year career on the rostrum.

“The main thing for us is to sell as many as we can because we own the majority of them outright,” he said.

“An incredible amount of hard work is put into getting to the past two days and it’s nice to now be able to sit down with our team and friends to celebrate another successful sale.”

The respect for one another was apparent when Sir Patrick Hogan told media even before the result was confirmed that a tie would be a fitting result for the two dominant New Zealand nurseries.

“I think most people should be very pleased with the results from the top to bottom. Of particular note from what I’ve seen is that there has been a kick up from the domestic market which is great with the likes of David Ellis, Albert Bosma and other syndicators bringing new people into racing and giving the industry a boost.”

New Zealand Bloodstock managing director Andrew Seabrook was delighted that the sale figures were so strong off the back of last year’s record-breaking Premier session.

“We’ve offered more Premier Sale horses this year and had a buying bench with enough extra depth to compete for them. The sale clashing with Chinese New Year wasn’t ideal however increased participation from Dubai countered its effect.

“Again, we're grateful to our domestic buyers and overall leading buyer David Ellis and his Te Akau Racing team who continue to really bolster the sale.”

But a notable factor in the buying category was the international spend of NZ$41.1 million (£24.1m/€28m) from purchasers from Dubai to Australia to The Netherlands – accounting for 70 per cent of total receipts.

New Zealand buyers held their own, however, with 122 of the yearlings headed to domestic trainers after NZ$17.3 million (£10.1m/€11.8m) was outlaid on those youngsters.

While the international heavyweights of the China Horse Club, BBA Ireland, Sheikh Mohammed Bin Khalifa Al Maktoum and Godolphin’s Sheikh Mohammed bin Rashid Al Maktoum were active, Ellis remained a forced to be reckoned with for international buyers, his top-priced purchase an Exceed And Excel colt out of Oasis Rose secured for NZ$625,000 (£366,000/€425,000).

“It’s been an enormously successful sale and I take my hat off to the team at New Zealand Bloodstock for bringing together such a strong buying bench,” he said.

“To have three sheikhs investing in New Zealand horses is a credit to the company and the vendors and I must say the sale has been a lot of fun.”

Ellis described the Exceed And Excel yearling as the “colt of the sale” and revealed he had inspected the colt much more than his general viewing.

“I first saw this colt as a foal at Cambridge Stud. Since then I’ve probably had the opportunity to see him at least another ten times before he went into the ring today,” Ellis said.

“He has impressed me all the way through, particularly with the way he has thrived in the environment here at the sales complex. He has a wonderful temperament that is just one of his many admirable attributes.

“I’ve always had a dream to win the Golden Slipper and it is this type of colt that I think is well suited to a task like that.”

“We rated this filly amongst the best physical types in the sale and that combined with her pedigree and knowing her sister had plenty of ability made her an attractive proposition for us,” Wallace said.

“The Shamexpress colt was an interesting one even when you look past his colour,” Wallace said.

“He has great muscle, strength and an amazing temperament - having been under immense scrutiny all week he handled the spotlight and extra pressure like a true professional.”

However, no second-day yearling could eclipse Beltana’s O’Reilly-Volkrose colt, knocked down to the amalgamation of Alan Bell, China Horse Club and Newgate for NZ$825,000 (£483,000/€561,000) during the opening session.

It was the first time since 1981 that a Premier Sale top-priced lot was sold from a farm outside of Cambridge Stud, Pencarrow Stud, Curraghmore, Lyndhurst Farm or Esker Lodge.

Beltana studmaster Richard Rutherford was overwhelmed at his achievement, which was complemented by the farm’s leading vendor by average title, with an enviable NZ$411,667 (£241,000/€280,000) average for three yearlings sold.

“It was an all-round sensation and a huge relief after a difficult start to the year,” Rutherford said after the O’Reilly colt sold on day one.

“It’s a 40-hour journey for us to get up here... and we’re grateful to everyone who has contributed to us achieving such a result.”

There was an emotional end to the sale when Joe Walls knocked down his gavel for the final time to a standing ovation from a packed Karaka auditorium.

Walls has sold at the Premier sales for the past 45 years and while he will no longer be auctioneering, he remains a key figure with New Zealand Bloodstock as chairman of the sales company.