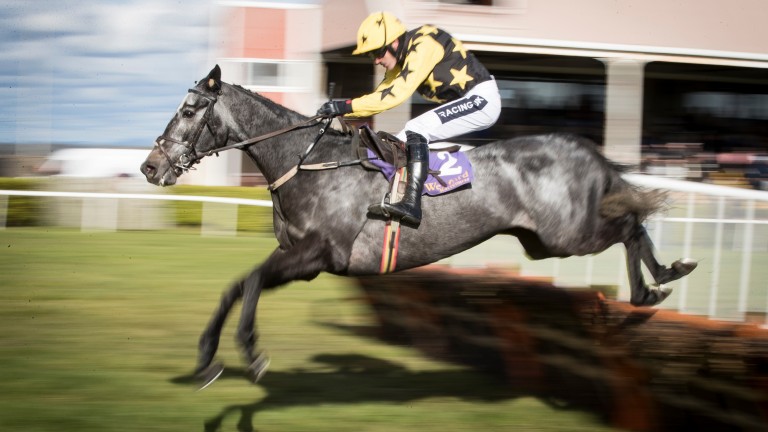 Mister Blue Sky: third to Klassical Dream in a Grade 1 novice hurdle on his most recent start
Patrick McCann
1 of 1
By Ollie O'Donoghue 12:08PM, AUG 21 2019

Jumps buyers may have to consider a brief sojourn in Sweden this September, with a yearling half-brother to the Willie Mullins-trained Mister Blue Sky catalogued at lot 58 in the SAEF Yearling Sale, which takes place at Bro Park racecourse from 1.30pm local time on September 28.

Mister Blue Sky, a five-year-old son of Royal Applause, achieved an official Flat rating of 84 having won four times on the level for Sylvester Kirk, and caught the eye of Harold Kirk and Willie Mullins at the 2017 Tattersalls Autumn Horses in Training Sale, where the duo snapped him up for 130,000gns.

He has proved equally adept over hurdles, winning a Wexford maiden hurdle by eight and a half lengths on his first start for Mullins, and he continued to progress winning a Grade 2 novice hurdle at this year's Fairyhouse Easter meeting, before finishing third to Klassical Dream in the Grade 1 Champion Novice Hurdle at the Punchestown festival.

Mister Blue Sky was bred by Shadwell out of Mujdeya, a two-time winner by Linamix who was sold to Goffs Scandinavian agent Filip Zwicky for €7,200 at the 2014 Goffs November Sale.

The yearling colt, named Mirach, was bred by Pernilla Nilsson and has a two-year-old full-brother who won on his only start at Bro Park. Their sire is Barocci, a Listed-winning son of Deep Impact who holds court at Ravdansens Stuteri in Sweden.

FIRST PUBLISHED 12:08PM, AUG 21 2019
Mister Blue Sky proved equally adept over hurdles, winning a Wexford maiden hurdle by eight and a half lengths on his first start for Willie Mullins