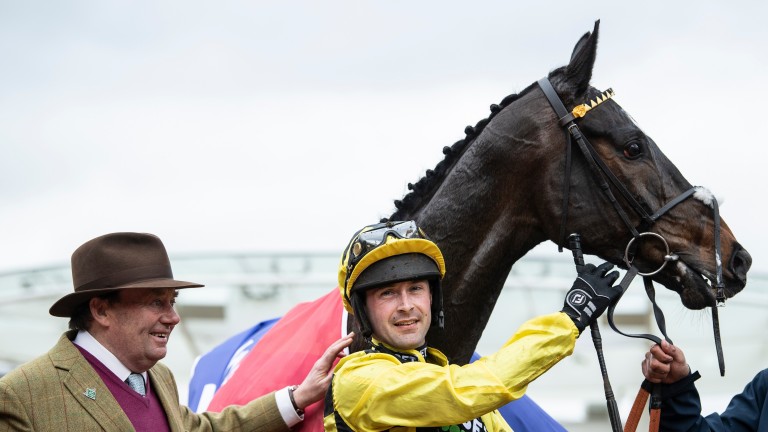 Shishkin strikes a pose after his victory in the Sky Bet Supreme Novices' Hurdle
Edward Whitaker
1 of 1
By James Thomas UPDATED 4:19PM, MAR 10 2020

Shishkin, long-time favourite for the Sky Bet Supreme Novices' Hurdle before a marked pre-race drift, prevailed in a tooth and nail battle with Abacadaras to provide his sire Sholokhov with another important Cheltenham winner in the curtain-raising Grade 1 event.

In doing so, he gained a notable success for a family which came close to causing an almighty Festival upset.

Bred by Clive Bennett and his late wife Eileen, Shishkin is the third foal out of Labarynth, a daughter of Exit To Nowhere who never ran under rules but did manage to win three times between the flags.

While Labarynth's race record may not have pointed the way to Cheltenham success for her progeny, the clues were certainly there in her pedigree as she is a half-sister to Voler La Vedette, who won 13 races, including a deserved Grade 1 victory in the 2011 Hatton's Grace Hurdle.

The talented racemare is arguably best remembered for giving Big Buck's a mighty scare in the 2012 World Hurdle. Having cruised into contention on the bridle, the daughter of King's Theatre jumped the last barely a length behind her famous rival, but when push came to shove she could not get by Big Buck's, who went on to claim his fourth consecutive success in day three's feature race.

Another of Labarynth's siblings is the smart performer Hennessy, the winner of the bet365 Gold Cup Chase who was within hailing distance of the leaders when falling three out in the Pertemps Final won by Ballyfitz at the 2008 Festival.

Labarynth has produced one other winner, Marcle Ridge, who landed a hunter chase at Cheltenham last year. She also has Russian Maze, an unraced four-year-old sister to Shishkin, on the ground, a three-year-old filly by Shirocco named Miss May Hill, and a yearling filly by the ill-fated Karpino.

“Sheepskin”, as he’s been nicknamed by his fans at Glenview, wishes big-brother SHISHKIN (Sholokhov) the best of luck at Cheltenham today! pic.twitter.com/dXjKbtfPQT

Shishkin is from the first Irish-bred crop of Sholokhov, who stands at Glenview Stud. The son of Sadler's Wells has hitherto been best known for supplying Cheltenham Gold Cup hero Don Cossack, who was sired when the stallion stood at Gestut Etzean in Germany.

Although Sholokhov is now proving himself as a National Hunt sire of consequence, having also produced other notable jumps performers such as Kruzhlinin and Dell' Arca, he has also supplied a Group 1 winner on the Flat in Night Magic, who won the Grosser Preis von Baden and the German Oaks.

Night Wish, a Group 3-winning Sholokhov brother to Night Magic, is standing his fourth season at Haras de Montaigu, where he stands alongside No Risk At All, sire of Epatante.

Shishkin has been through the sales ring on three occasions. He was signed for by Ben Case at €40,000 when offered as a foal at the Tattersalls Ireland November National Hunt Sale, before he was knocked down to Boyne Farm at the same auction house's Derby Sale three years later.

His most recent appearance at public auction came at the Tattersalls Cheltenham December Sale in 2018, where Highflyer Bloodstock brought the gavel down at £170,000 shortly after the horse had won a Lingstown maiden for Virginia Considine.

When asked about turning such a healthy profit on Shishkin, Considine said: "He came up quite early on at the Derby Sale, which worked out for us. We gave him a run in the spring but we weren't hard on him as he was a big, raw horse.

"We could have sold him after that but we loved him and threw him out in the field. He grew a couple of inches and really strengthened up, he was a much stronger horse after that. He's a pure athlete."

The Supreme Novices' Hurdle showed that edition of the December Sale in a particularly promising light, as it was topped by Chantry House at £295,000 before the son of Yeats went on to finish third behind Shishkin on Tuesday.