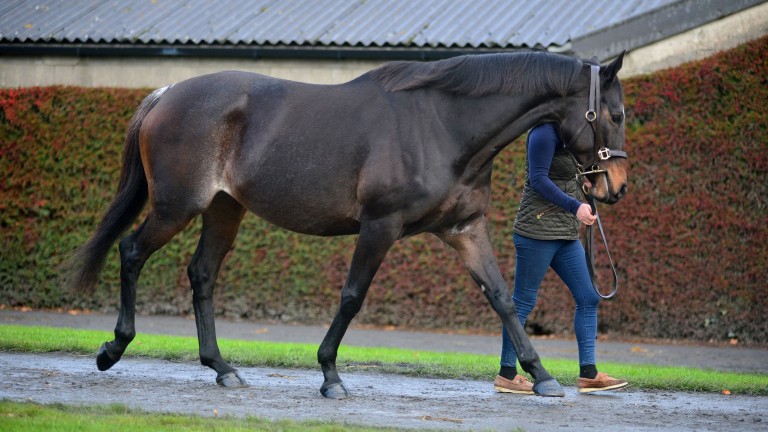 Benie Des Dieux ahead of her date with destiny in the sales ring at Tattersalls Ireland
Pat Healy
1 of 1
By Aisling Crowe UPDATED 8:46PM, NOV 11 2021

Benie Des Dieux is accustomed to life as a star; as the winner of Grade 1s at Auteuil, Cheltenham and Punchestown, she’s been there and got the rug. In an expanded mares catalogue that concluded a record-breaking Tattersalls Ireland November National Hunt Sale, she was again the brightest jewel in a glittering collection.

Earlier on Thursday, before the hammer fell for the first time, a steady stream of photographers, potential purchasers and the odd fan or two made their way to Barn G to catch a glimpse of the ten-year-old daughter of Great Pretender who is carrying her first foal, by Walk in The Park and whose progeny were all the rage during the preceding foal sessions.

A skittish foal elicited a leap and a buck from the champion while on parade, demonstrating that impending motherhood has not dulled the competitive edge which helped her win 11 races. She posed for pictures and stood for inspection with the haughty air of a mare who knows the attention is her due.

Under the lights of the sales ring, her coat glistened and Benie Des Dieux announced her presence with a loud whinny as she took her first turn around the ring. Bidding opened online at €100,000, with Will Kinsey the first of those present to play his hand, upping the bid to €150,000. Ross Doyle, Cormac Farrell, stationed on the bridge, and Gerry Aherne of Coolmore, taking instructions on the phone, quickly joined the fray. 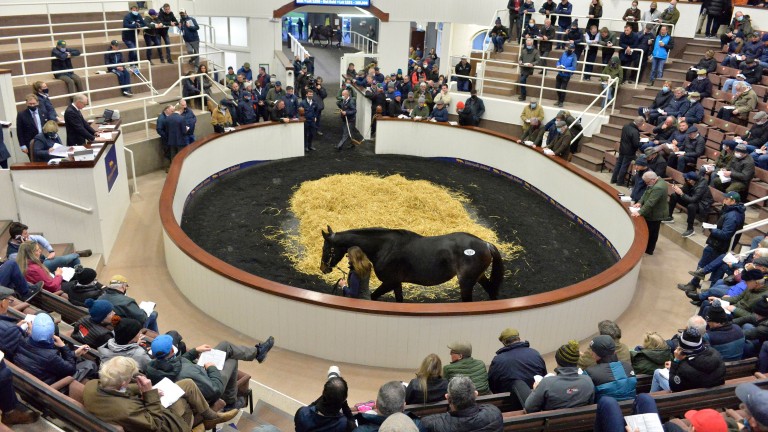 Benie Des Dieux: "It’s a good start to get a queen like her.”
Pat Healy

It came down to a shootout between the latter two parties as the bids crept ever higher, surpassing the previous sale record of €290,000 made by Benie Des Dieux’s former stablemate Laurina in this ring last year.

Ultimately it was Aherne who struck the winning bid at €350,000, and he revealed that the mare was for a surprising new ownership combination, that of MV Magnier and Bective Stud.

“Noel and Valerie [Moran, of Bective Stud] are putting together an incredible bunch of racehorses and broodmares, and we’re delighted to be involved with a mare of this quality with them,” said Aherne.

“It’s something that's been discussed recently; Noel and Valerie are some of the biggest players in the game and we’re delighted to partner with them to buy Benie Des Dieux. They've built a beautiful farm and are a big part of Irish racing now, so to have that partnership with them is very positive. It’s a good start to get a queen like her.”

A strong mare with more size than one remembers from her racing days, she is a granddaughter of the brilliant King’s Theatre and joins a list of Grade 1 winners from Willie Mullins’ Closutton Stables that have starred at this sale in recent years, with the likes of Grade 1 winners Airlie Beach and Augusta Kate, along with Laurina, just some of the names who have lit up the ring.

Aherne added: “Willie said to me this morning that, of all the mares he’s ever sold, she was the best. She’s stunning and turned out incredibly well. I’m delighted for Rich Ricci, who supports Irish racing so heavily, and it’s great that he’s getting something back.”

Benie Des Dieux is in foal to one of Coolmore’s hottest properties in Walk In The Park and, with an enviable roster of stallions to choose from, Aherne suggested that she could be the mare to launch the stud career of Adlerflug’s 2020 German Derby winner and Arc runner-up In Swoop.

“We’re not short of stallions, we’ve new horses too and something like In Swoop might suit her,” he said. “We want to try to get him up and running, we like him a lot, but we’ll decide that with Noel and Valerie. She’d be some mare for him to get, but she’s in foal to a horse we think is the real McCoy.”

Closutton also consigned two other mares who made six figures on Thursday, Buildmeupbuttercup, who went to Jayne McGivern at €165,000, and Salsaretta, who cost Seamar Bloodstock €135,000.

Magic Of Light, despite winning nine times, is probably most famous for a race she did not win, being runner-up to Tiger Roll in his second Grand National triumph. She was the bridesmaid again on the top-lot leaderboard behind Benie Des Dieux, though in the eyes of Cathal Mariga the Flemensfirth mare was number one

“She’s a nicer mare than Benie,” said the NUI Maynooth equine business student, who struck the successful bid of €185,000 on behalf of his family’s Coolmara Stables. 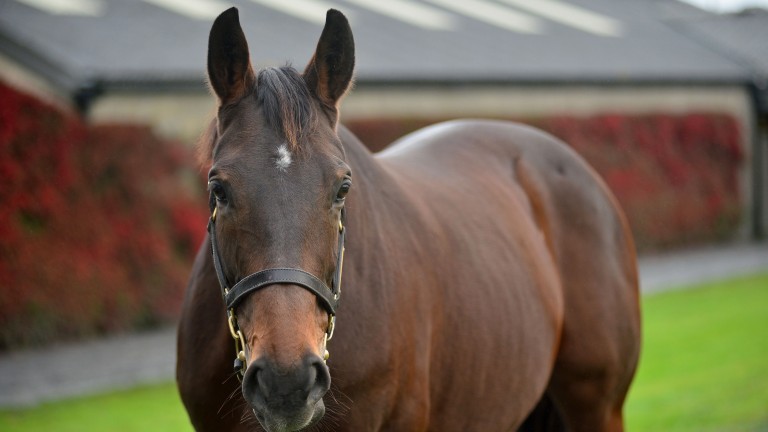 Magic Of Light: "She’s a really good walker and has a great pedigree."
Pat Healy

His father Kieran added: “We said we wouldn’t be able to get Benie, she’d be too dear for us, so this was the mare we wanted.”

Baroda Stud consigned the ten-year-old daughter of Flemensfirth, and an unnamed online bidder, Will Kinsey and the Mariga family slugged it out for her, the Coolmara team prevailing at a price a little above the budget they had set.

Cathal Mariga said: “She’s a quality mare and ticked a lot of boxes; she has size and scope with a lovely walk. We knew we’d have to go strong on her, we hoped we’d get her for €150,000 but had to push a bit more.”

On Wednesday the family had sold the Crystal Ocean colt who topped the foal session of the sale when making €120,000 to Ben Case, and father and son are both fans of the young Coolmore National Hunt stallion.

Cathal Mariga said: “We sent five mares to Crystal Ocean this year, and with her that makes it six foals by him we’re expecting next year. Hopefully they’ll do well. We haven't thought about plans yet, we’ll foal her down and see what the foal is like, but she might go back to the same sire.”

The family also added lot 1262 to their broodmare band but at considerably less expense.

Offered by Ballincurrig House Stud, the unnamed four year-old Westerner filly is out of the multiple Listed winner and Grade 1 Aintree Bowl Chase second Carole’s Legacy and was a relative snip at €20,000. 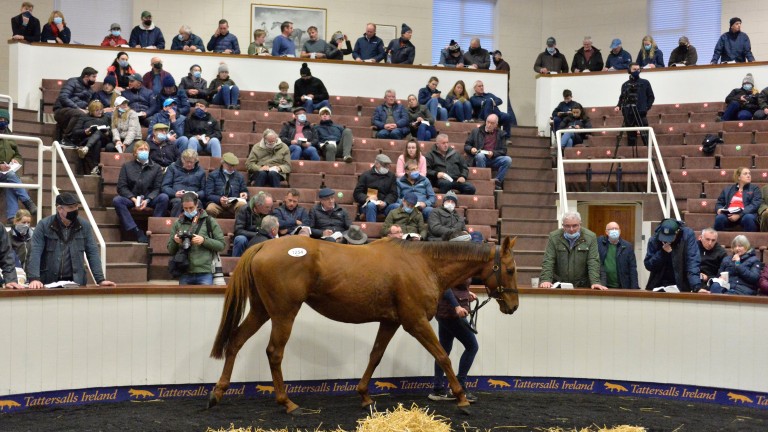 Buildmeupbuttercup in the sales ring at Tattersalls Ireland
Pat Healy

The chestnut mare Buildmeupbuttercup, a winner of three Listed hurdles, made €165,000 to online bidder McGivern. The seven-year-old daughter of Sixties Icon was yet another to be offered with a Crystal Ocean covering.

Dawn Run Mares’ Novice Chase winner Salsaretta was sold in foal to Rathbarry Stud’s Blue Bresil and the daughter of Kingsalsa was bought by Seamar Bloodstock for €135,000.

Diamond Hill was consigned by Rossenarra Stud but lot 1259, the winner of the Listed Oyster Stakes on the Flat for the Mee family, was trained by Mullins and bred by his wife Jackie.

The eight-year-old is a Beat Hollow half-sister to Grade 1 winner Blackstairmountain, who Mullins sent to Japan to claim that country’s most prestigious jumps race, the Nakayama Grand Jump, and was purchased for €100,000 by Cottage Bloodstock.

The record-breaking foal section of the sale concluded with the week’s most expensive foal by the Aga Khan’s dual Derby hero Harzand.

Lot 1159 is from a classy Flat family but his immediate relatives have excelled over jumps; his dam Je T’Adore, by Montjeu, has already produced A Wave Of The Sea, winner of Leopardstown’s Grade 1 Spring Juvenile Hurdle in 2020 for Joseph O’Brien and JP McManus. 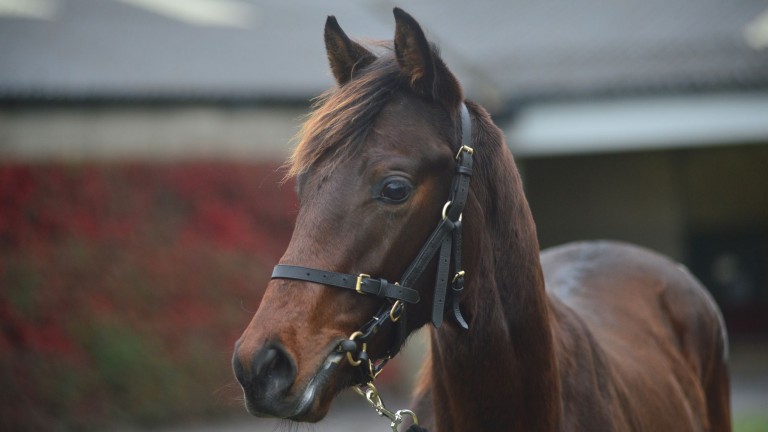 The Harzand colt foal who caught the eye of Timmy Hillman at €57,000
Pat Healy

Timmy Hillman was the last man standing when the hammer came down at €57,000 and he said of his purchase: “He’s a good foal and would have been quite at home here yesterday or Tuesday.

"The mare has already produced a Grade 1 winner and Dark Voyager looks as if he could add to the page. He will be coming back for resale.”

"A Wave Of The Sea is talented horse and Willie Mullins has Dark Voyageur, there should be more to come from him too." pic.twitter.com/RRjlDMB4Kp

The Malinas half-brother to last season’s Ladbrokes Trophy winner Cloth Cap was another highlight of the final foal session and Hillman also made a play for the bay colt consigned by Kilclare Stables on behalf of Joe Pratt.

However, Kevin Ross had the ammunition to see off Hillman for lot 1195, who is from the family of Irish Grand National winner Niche Market and Strath Royal, successful in both of Wetherby’s famous staying chases, the Charlie Hall and Rowland Meyrick.

“He’s an athletic foal and a half-brother to a good horse,” said Ross, who was purchasing on behalf of Chris Jones’s Killeen Glebe, “There is a bit to come hopefully in the pedigree before he is offered for resale.”

They contributed to record-breaking trade over four sessions this week which witnessed €12,351,600 worth of National Hunt foals sold, the highest tally for the sale in its current incarnation.

The foal sale recorded slight increases in both the median and the average, with the former improving by four per cent to €13,500 while the average was up two points to €18,299.

Five days of pulsating demand drove the turnover higher than it has been since the sale was reconfigured in 2009. Trade over the five days reached €15,758,100, which resulted from 73 per cent of the horses offered changing hands.

Both the median and average figures declined slightly on last year’s truncated event, but they were still the second best recorded by the Tattersalls November National Hunt Sale over the past two decades.

The sale also registered a record price for a National Hunt mare at this complex with the purchase of the four-time Grade 1 winner Benie Des Dieux for €350,000 by MV Magnier and Bective Stud.

Poet's is the Word for noted judge Ross

FIRST PUBLISHED 7:30PM, NOV 11 2021
We’re not short of stallions, we’ve new horses too and something like In Swoop might suit her