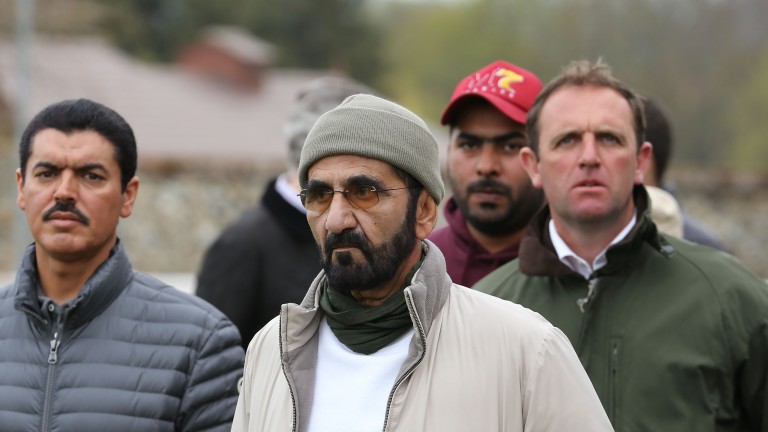 Sheikh Mohammed was in Newmarket for the first day of the Tattersalls Craven Breeze-Up Sale on Tuesday, and he made an almighty entrance when his representatives went to 850,000gns for a Kingman filly consigned by Tally-Ho Stud early in the evening session.

A wave of major players followed the well-touted filly into the Park Paddocks ring, with Kerri Radcliffe, standing in the bidders' area directly to the left of Edmond Mahony's rostrum, pushing the Godolphin team furthest.

However, each raise from Radcliffe was batted back by Anthony Stroud, who stood beside the Sheikh behind the partition.

"The idea is that she'll be a Royal Ascot filly," said Stroud. "She looks quick and did a very good breeze, did a fast time and comes from a very good hotel.

"Kingman is doing well too and she vetted well. Everything's good. Sheikh Mohammed will decide who will train her in due course."

The filly was making her second appearance in the Tattersalls ring within six months, and supplied a huge profit having been pinhooked from the Tattersalls December Sale for 92,000gns. 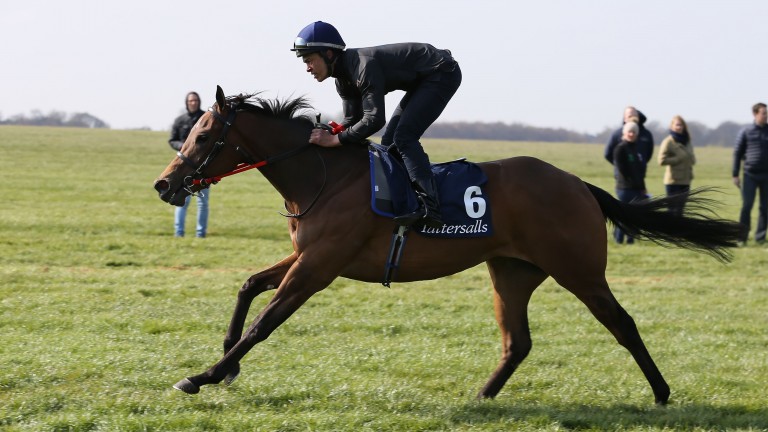 Lot 6: the Kingman filly bought by Godolphin for 850,000gns
Laura Green
The filly was signed for by Stroud's business partner Matt Coleman on that occasion, when she was offered by Baroda and Colbinstown Studs. She is out of Shyrl, a winning daughter of Acclamation who was bought by Tony Nerses for Saleh Al Homaizi and Imad Al Sagar for 70,000gns at the 2008 Craven Sale.

Shyrl went on to finish second behind Langs Lash in the Queen Mary Stakes.

"She was one of the fillies from the Imad Al Sagar and Saleh Al Homaizi dispersal, and Roger [O'Callaghan, Tally-Ho Stud] and I thought she looked quick," said Coleman when asked how he came to select the March-born foal.

"Her mother was a breeze-up filly, she breezed very quick before running second in a Queen Mary, and we thought if the mother could breeze then she probably could too.

"She was a small, light-framed yearling, but she always looked very fast and she breezed quick, she looks a very racy filly. Everyone is looking for the Royal Ascot types and she looks like she could go one better than her mother did. Kingman is the sire of the moment too. The stars have aligned and it's great for Roger."

Tattersalls Craven Sale: a fast start to selling as Godolphin go to 850,000gns for a Kingman filly offered by Tally-Ho Stud pic.twitter.com/62x5x8MSqn

The filly's pedigree had also been subject to a noteworthy enhancement since her turn at the yearling sales, with her half-sister Eufemia becoming the third winner from three runners produced by Shyrl, along with the Group 2-place Raucous.

Godolphin have enjoyed some notable recent success with the progeny of Kingman, with the hugely promising Persian King, who is owned in partnership with the Wildensteins' Ballymore Thoroughbred Ltd, having recorded a wide-margin reappearance win in the Group 3 Prix de Fontainebleau on Sunday.

Sheikh Mohammed, an infrequent visitor to the Craven Sale, was here for the 2009 edition when Dubawi's debut two-year-olds were selling, and his latest appearance at Tattersalls' flagship breeze-up sale coincides with the first juveniles by Dubawi's 2,000 Guineas-winning son Night Of Thunder coming under the hammer.

Godolphin signed for two lots by Night Of Thunder during the early stages of Tuesday's session, the pricier of which was the colt out of Sunset Avenue who fetched 375,000gns.

Offered by Johnny Collins' Brown Island Stables, the colt was another to show a handsome pinhooking profit, having been picked up for 48,000gns at Book 2 of last year's Tattersalls October Yearling sale.

"I just thought he was a very nice yearling when I saw him," said a stunned Collins. "He's a very uncomplicated, sound colt, actually he's a pleasure to deal with - there's a fierce word for the sire and if this lad is anything to go by, he'll work out. I hope he's very lucky for his new connections."

The colt, out of the Street Cry mare Sunset Avenue and a half-brother to the Grade 3-placed Excellent Sunset, was bred by Godolphin Management Company before being offered through Hillwood Stud at last year's yearling sales.

Godolphin were back in the market for another Night Of Thunder later on when going to 260,000gns for the colt out of Travel, a Street Cry half-sister to Kentucky Derby runner-up Eight Belles, offered by Powerstown Stud.

The youngster had been picked up by the Jamie Railton Sales Agency for 200,000gns at the 2017 Tattersalls December Foal Sale, but with withdrawn from the following year's Book 1.

Oak Tree Farm's Norman Williamson could be forgiven for being left a little frustrated when he could not book a flight home during Book 3 of last year's Tattersalls October Yearling Sale.

However, what first appeared to be a misfortune proved to be a blessing in disguise, as the Farhh colt he ended up buying for 35,000gns duly went the way of Godolphin for 300,000gns on Tuesday.

"It's actually a funny story," said Williamson. "I couldn't find a flight home during Book 3, so I took a look through the catalogue, saw this Farhh colt in here and went to see him - well he was a gorgeous horse, when I first saw him I thought 'wow'.

"He's developed well since then and the sire is going well - he's had a great week. But he was just a gorgeous horse. I'm delighted with that and I wish them the best of luck with him."

The colt is out of Anything Goes, a Nayef daughter of Irish Oaks heroine Winona. Farhh's runners have been in fine form of late, with the Listed-winning Elegiac and King Of Change supplying the sire with a double at Nottingham last Wednesday.

Godolphin's four purchases brought a total of 1,785,000gns, 34 per cent of the session's turnover, adding some credence to one vendor's assertion that trade could be summed up as: "It's Stroud or nothing."

Having found stars Sands Of Mali and Prince Of Lir at previous sales, the breeze-ups can have few bigger fans than Peter Swann, and the Cool Silk Partnership man will be hoping to have unearthed another high-class talent having gone to 230,000gns for the More Than Ready filly offered by Mayfield Stables.

"We probably paid a little bit more than we wanted," said Swann. "But she did a really good time, she's a very nice, well-balanced individual and she did well to go through that ground.

"She came through all that well and she has a good page. We'll decide soon where she goes but I suspect it will be Richard Fahey."

The filly is out of Beyond Our Reach, a daughter of Danehill Dancer who ran third behind Again in the 2008 Moyglare Stud Stakes.

The filly, whose further family includes the influential El Prado, made it third time lucky at the sales, having gone unsold for $120,000 at last year's Keeneland September Sale as well as failing to find a buyer at $67,000 at the Fasig-Tipton October Yearling Sale.

As is so often the case, there was plenty of apprehension among vendors prior to the sale. However, trade proved largely solid during the opening session, allowing for the fact that a degree of selectivity will always be in evidence at sales towards the upper end of the market.

The Tattersalls Craven Sale concludes on Wednesday, with the session starting at 6pm.

FIRST PUBLISHED 9:16PM, APR 16 2019
Her mother was a breeze-up filly, and we thought if the mother could breeze then she probably could too