Sheikh Hamdan dominates week of big spending by the Maktoums 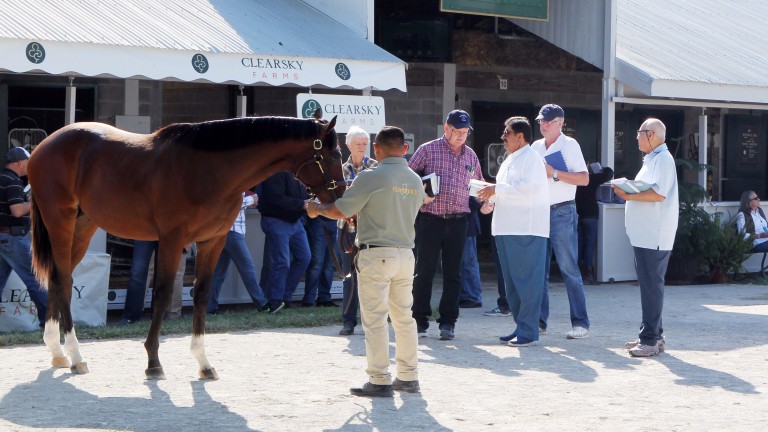 Sheikh Hamdan was on the spot to view yearlings and ended the first four days of the sale back on top as leading buyer
Keeneland Photo
1 of 1
By Michele MacDonald 2:46PM, SEP 15 2017

Sheikh Hamdan and his Shadwell team may not have been seen a great deal, once the Keeneland September yearling sale got underway – they sequestered themselves in a private room to bid in privacy – but his clout as a buyer was in evidence time and again.

After the four days of Books 1 and 2, Shadwell ranked as leading buyer with 17 horses acquired for a total of $12.475 million, superseding another Maktoum operation, Godolphin, with 17 yearlings for a total of $8.065 million.

Shadwell had ended the world's largest yearling sale as top buyer last year, so its current standing this time round came as no surprise to Rick Nichols, general manager of the Lexington farm owned by Sheikh Hamdan.

"I kind of thought we would be [leading buyer]," Nichols said with a smile. "It's getting to be a normal trend." 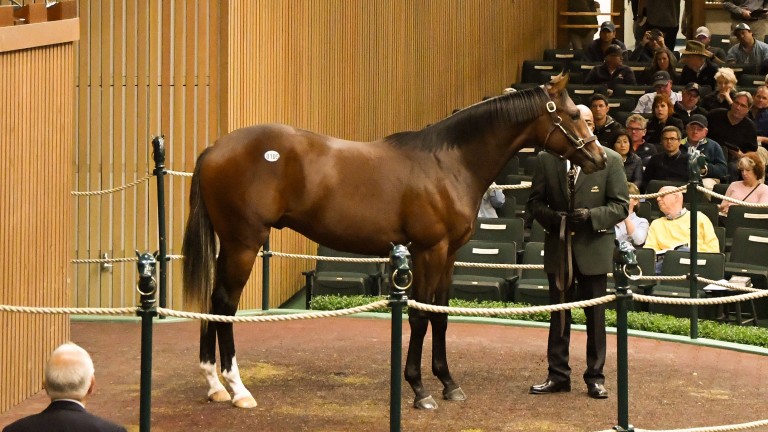 This knockout Tapit colt topped Shadwell's 17 purchases at $2.5 million
Keeneland Photos
After all, as Nichols noted, if Sheikh Hamdan decides he likes a yearling "it's hard for him to be denied."

Angus Gold, Shadwell racing manager in Europe, joined Stephen Collins and James Lenehan of Derrinstown Stud and Lexington farm managers Greg Clark and Jody Dunlap in searching for yearlings at Keeneland. Nichols could not join them, unfortunately, having been confined to a wheelchair by a fall from a ladder that shattered his ankles and broke his legs.

But that did not stop Nichols from taking up the yearling chase after Sheikh Hamdan and the European team departed Kentucky on Wednesday. He acquired two more colts for Shadwell, a handsome bay by Union Rags for $650,000 and a muscular chestnut by City Zip for $450,000.

Where the various Shadwell purchases end up racing will be determined by Sheikh Hamdan. But the most expensive – a $2.5 million Tapit colt out of Grade 1 winner Tiz Miz Sue – is certainly bred to be best suited to American racing.

"It doesn't matter to me," Nichols shrugged. "I like to see [Sheikh Hamdan] take all he can to Europe because it's so much easier for him to get there to see them run. And that's what it's all about: him having fun. It's very difficult for him to come and see a horse run in America. The more he takes over there, and if they go ahead and do well for him, all the better."

All but one of the Shadwell purchases – a $550,000 Speightstown filly out of a half-sister to Dubai Golden Shaheen winner Our New Recruit – are colts. Three of them, led by a $1.2 million son of Group winner Theyskens' Theory, are by War Front and two are by Kitten's Joy. Other sires featured in the portfolio include Curlin, Bodemeister, Into Mischief, Cairo Prince and Candy Ride.

Overall the Shadwell purchases at Keeneland to date have averaged $733,824. "It's a very strong market," said Nichols.

But it wasn't all work for the Shadwell team, who also arranged a dove hunt on the Lexington farm and then a meal of the results.
"The boss really enjoyed himself," Nichols said. "He enjoyed seeing a lot of nice horses. He came in last Friday and he left [Wednesday]. He saw everything on the farm, all the babies and yearlings and the stallions. He shot some doves and had a good time."

FIRST PUBLISHED 2:46PM, SEP 15 2017
The boss really enjoyed himself. He enjoyed seeing a lot of nice horses. He saw everything on the farm, all the babies and yearlings and the stallions

'At some point you have to take a step back and say, 'Holy cow!'' Shadwell 'trimming' continues with more than 100 horses catalogued for July sale