Sheikh Fahad hoping he has unearthed next Kitten's Joy 'steal' 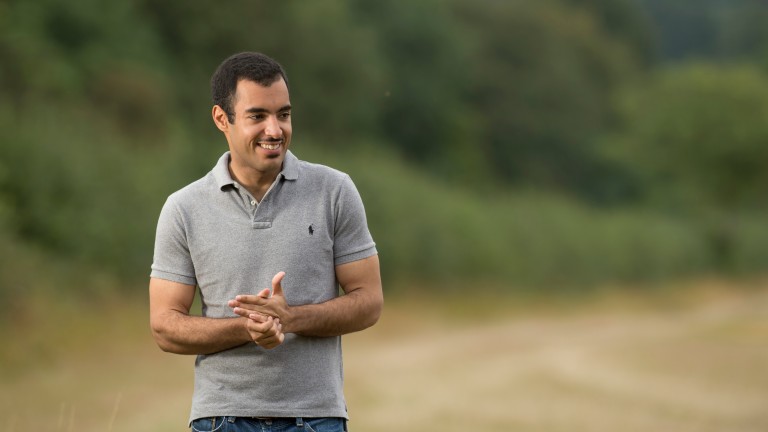 As Sheikh Fahad Al Thani and his advisor David Redvers jet back to Europe from Kentucky on Friday, they will reflect on the ultra-hot Keeneland September yearling sale as a market at which they were able to buy one colt they did not think they could afford and another that could be “the steal of the sale".

The former of those two colts is a son of Triple Crown winner American Pharoah and a half-brother to multiple Grade/Group 1-placed stakes winner Giovanni Boldini. A decision by Sheikh Fahad on whether he will race in Europe or the US is pending.

“To be honest, we didn’t think we’d be able to afford him, so it was a pleasant surprise,” said Redvers of the $800,000 colt sold as Hip 818 from the Taylor Made Sales Agency consignment. “He came under where we thought he would be in price.

“We bought him because he was an outstanding individual, who I thought was one of the more forward looking Pharoahs,” Redvers continued. “He could go either way [on turf or dirt]; he’s a very stylish horse.”

If the colt stays in the US, he will be trained by Simon Callaghan, who handles runners sent to California by Sheikh Fahad’s and his family’s Qatar Racing, including Grade 3 winner Treasuring.

Redvers did not disclose possible arrangements if the colt is sent to Europe.

The other colt Redvers and Sheikh Fahad bought during the Keeneland sale was Hip 475, a dark bay son of Kitten’s Joy out of Grade 3 winner Sweeter Still, a Rock of Gibraltar half-sister to Racing Post Trophy winner Kingsbarns.

Since their current racing star is Kitten’s Joy’s son Roaring Lion, the winner of the Juddmonte International and Eclipse Stakes who will take on Saxon Warrior and Study of Man in an electric renewal of the Irish Champion Stakes on Saturday, Redvers has high hopes for the newly acquired yearling.

An extra bonus is that the colt, bred by Calumet Farm, cost only $90,000, even less than did Roaring Lion, who now looks to be a stellar bargain after being bought at the 2016 September sale for $160,000.

“We got the Kitten’s Joy very reasonably; he’s out of a very good racemare who has not proven a very successful broodmare to date. But he was very much what I like - he’s very much the sort of Kitten’s Joy I am looking for,” Redvers said. “He had great movement and strength and was a very correct horse as well. We obviously think the stallion is well above average, and if he’s nicked well with the mare, which he could easily have done, we could have got the steal of the sale.”

Steals were not easy to find at Keeneland, which during Book 1 was cranking out $1 million sale horses at a pace equal to the halcyon days prior to the global economic crash.

“The market itself has been incredibly strong and robust. I’d say this trade here is as strong as any I’ve seen,” Redvers said. “The only trade I’ve really seen that is stronger than this is the Japanese sale this year, which is on a different planet.”

The Japan Race Horse Association select sale in Hokkaido set records in July, spurred on, as always, by the world’s most lucrative prize-money structure offered through the Japan Racing Association.

In addition to buying yearlings at Keeneland, Redvers said Sheikh Fahad keeps some breeding stock at Hunter Valley Farm outside Lexington and also was involved with some pinhooking at the September sale, although not in the name of Qatar Racing.

Redvers said Sheikh Fahad may opt to do more business in the US, particularly since he “thoroughly enjoys California", but it will be on a case-by-case basis.

In the meantime, they are looking forward to seeing 'The Lion' run again this weekend and to the development of the yearlings acquired at Keeneland.

Like all owners and breeders who are connected with American Pharoah in some way, Redvers is curious about how his stud career will unfold, particularly since Coolmore seems to be supporting him strongly and plans to send some of his offspring to race in Europe.

“We’ll see how many end up in Ballydoyle - that will be fascinating,” Redvers said. “To be fair, we went to see him when he retired and we sent him a couple of mares. He’s a very stylish horse and he looks like he could be a turf horse. The mystery of what makes a good dirt horse and what makes a good turf horse continues. Some of them cross over, and he’s as likely to cross over as any.”

FIRST PUBLISHED 12:42PM, SEP 14 2018
We obviously think the stallion is well above average