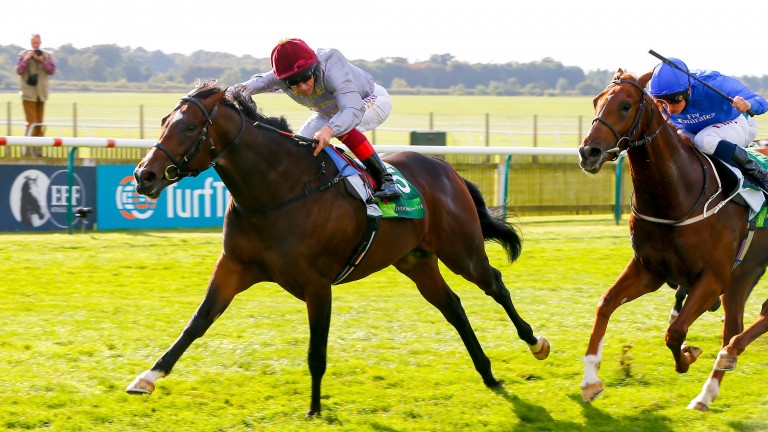 Last season's outstanding two-year-old sprinter Shalaa has been retired from racing and will start his stallion career at his owner Al Shaqab Racing's Haras de Bouquetot in Normandy next year, the operation has announced on Twitter.

Shalaa was trained by John Gosden to break his maiden over 6f at Newmarket, which sparked a winning spree that took in victories in the July Stakes, Richmond Stakes, Prix Morny and Middle Park Stakes.

Gosden hailed the son of Invincible Spirit as "very very fast - the fastest two-year-old I've trained" after the Middle Park.

A pelvis injury meant Shalaa made a belated three-year-old debut this month, but he made it a winning comeback in the Bengough Stakes at Ascot.

He signed off with a below-par effort in the British Champions Sprint back at the same track a fortnight later.

Shalaa's pedigree is sure to win him plenty of fans at stud as Invincible Spirit is developing into an important sire of sires, with sons I Am Invincible, Lawman and Zebedee having supplied high-class horses.

He was bred by Mogeely Stud out of the winning and Grade 3-placed War Chant mare Ghurra, a half-sister to Middle Park Stakes winner Hayil and to the granddam of Futurity Stakes scorer Dragon Pulse.

Shalaa was pinhooked by Norris/Huntingdon for 100,000gns as a foal and resold to Charlie Gordon-Watson on behalf of Al Shaqab Racing for 170,000gns as a yearling at Tattersalls.

FIRST PUBLISHED 1:28PM, OCT 21 2016
Shalaa's pedigree is sure to win him plenty of fans at stud as Invincible Spirit is developing into an important sire of sires