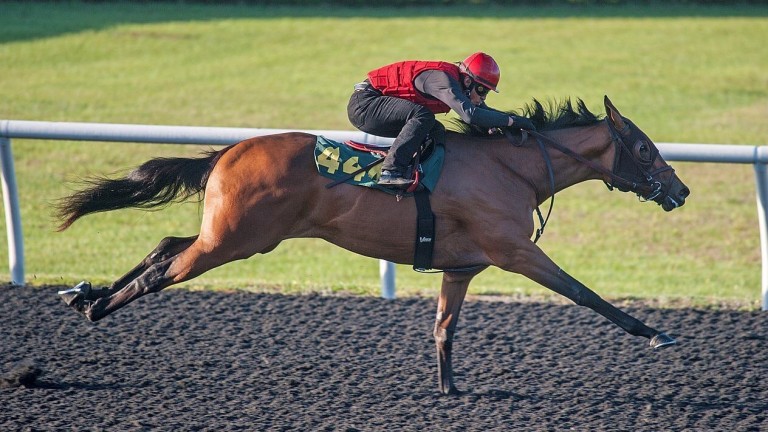 The action picked up on Wednesday during the second session of the Ocala Breeders' Sales Spring Sale of Two-Year-Olds in Training, with one juvenile breaking through the seven-figure barrier and double-digit gains in average and median prices.

Boosted by a larger buyer base than was present during Tuesday's opener, the Wednesday session had a more positive vibe throughout on a hot, sunny day in north central Florida, with the temperature in the 80s.

Although the average and median prices Tuesday represented increases over the comparable day a year ago, traffic in the barns was light and the action in the ring was spotty, with no individual reaching the $500,000 mark. The sale's start was two days after Easter Sunday.

Noting the difference in the stronger market between Tuesday and Wednesday, OBS director of sales Tod Wojciechowski said: "Maybe there was some people delayed in getting to the sale because of the Easter holiday. Also based on how the horses fall in the catalogue (with sale order determined alphabetically by the individual horses' dam's first name), it's hard to predict what can happen on any given day."

On Wednesday, Wojciechowski noted: "There was a good energy and strong activity all day long, and all ranges. The bidding was very active."

To illustrate the depth of the market, the five horses sold for prices above $500,000 represented one fewer than the six sold at that level during last year's second session.

The session topper was a Quality Road filly purchased by Emmanuel de Seroux of Narvick International for $1 million. Consigned as lot 444 by De Meric Sales, the filly foaled on April 8, 2017, is out of Paris Rose, the dam of Grade 3 winner Decelerator and granddam of Nafaayes, a multiple Group 2 winner in South Africa.

De Meric also hit with the second-highest price of the day, a Tiznow colt (321) purchased by Solis/Litt for $600,000. The colt was bred in Kentucky by David Jacobs and the Tiznow Syndicate. He is a half brother to Grade 1 winner Promises Fulfilled and graded stakes-placed Marquee Miss.

Nick de Meric said Wednesday's results represented "a very healthy market, top to bottom. We led some pretty nice stock up there today that we were excited about before we got there. They were well received, and even some of the lesser lights sold very reasonably."

Buyer Aron Wellman of Eclipse Thoroughbred Partners said there was plenty to like in the OBS offerings.

"I think there are plenty of good horses to go around," Wellman said. "OBS does a good job of bringing in quality, and there seems to be some depth in the catalogue this year."

Wellman said that attendance at the sale on Wednesday was on par with previous sales.

"I don't think there are any fewer buyers lining up to inspect horses, bid on horses, or buy horses," he said. "The competition here is as intense as ever."

Consignor Barry Eisaman said the marketplace was essentially unchanged from where it has been the past couple of years.

"The nice horses are getting plenty of traffic (in the barn area), but anything considered average will get average traffic," he said.

Randy Miles said inspection action at his consignment had been non-stop Tuesday and Wednesday.

"My guys had to get new shoes yesterday," he said jokingly. "I hope that translates into action in the ring."