Nicest will line up in the first race at Leopardstown 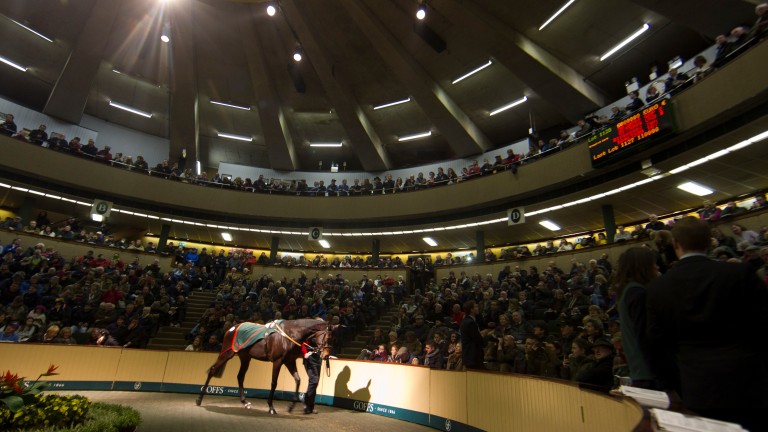 A packed Goffs auditorium looks on as Chicquita sells for €6 million
Patrick McCann
1 of 1
By Ollie O'Donoghue 1:24PM, JUL 22 2020

Nicest - arguably the best bred youngster entrusted to Donnacha O'Brien by the Coolmore partners - will make her first appearance in the mile Decorated Knight Irish EBF Fillies Maiden at Leopardstown on Thursday (1.00).

The American Pharoah filly is the second foal out of the Montjeu mare Chicquita, the Irish Oaks heroine who set a European auction record when sold for €6 million as part of the Paulyn dispersal at the Goffs November Sale in 2013.

O'Brien is familiar with the family have ridden the mare's first runner, the War Front filly Secret Thoughts, to win a Naas maiden before the pair finished third in the Group 3 Silver Flash Stakes at Leopardstown.

The Coolmore-bred Nicest will be ridden by five-pound claimer Gavin Ryan and faces no easy task on debut.

Their father Aidan, meanwhile, fields the newcomer Simply Incredible, a Galileo filly out of Race For The Stars, a Group 3 winner who has already produced two runners with a three-figure Racing Post Rating (RPR) in Sir John Lavery and Momentus.

Of those with experience, the Ger Lyons-trained Talacre is a Flintshire half-sister to Siskin who finished second on her only start at Bellewstown, while the Aidan O'Brien-trained Willow is an American Pharoah filly out of Peeping Fawn who was fourth at the Curragh on her only prior outing.

Peeping Fawn, who precedes Chicquita on the Irish Oaks roll of honour, has produced three runners with a three-figure RPR headed by the multiple Group/Grade 1-placed September.

The Irish National Stud are sponsoring the race and are running a Twitter competition asking bloodstock fans to correctly predict the outcome.

FIRST PUBLISHED 1:24PM, JUL 22 2020
The Irish National Stud are sponsoring the race and are running a Twitter competition asking bloodstock fans to correctly predict the outcome