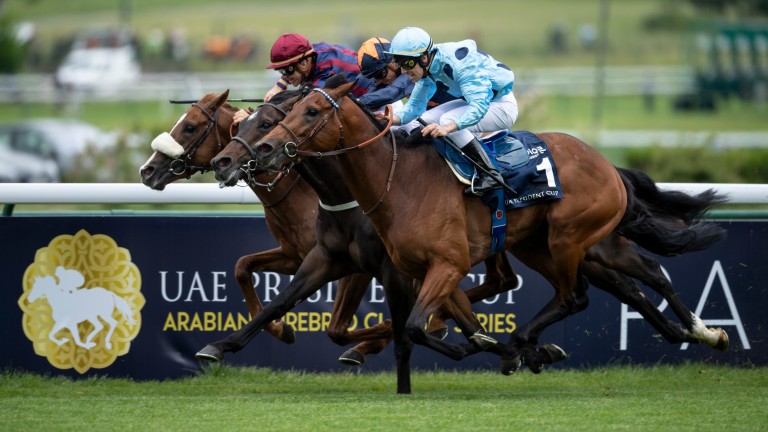 The catalogue for this year's Arqana V2 Yearling Sale, designated for more physically forward lots, has been unveiled and will comprise 140 youngsters.

The company hopes that the next Olmedo or Teppal - V2 graduates who annexed this year's Poule d'Essai des Poulains and Pouliches at the new Longchamp - could be found among the lots on offer at this year's renewal which takes place on August 21.

Trainer Jean-Claude Rouget snapped up the Declaration Of War colt Olmedo for €100,000 from the Capucines consignment last year, while Con Marnane signed the docket at €60,000 for the Camacho filly Teppal on the same day.

From the same catalogue, Patascoy was a half-length behind Study Of Man in the Prix du Jockey Club after filling the runner-up spot in the Group 3 Prix de Guiche. In the fillies' ranks, Siyouni filly Barkaa won the Group 3 Prix Vanteaux, an important Classic trial.

The catalogue features a number of sires who boast a particularly strong record with their juveniles, such as Dabirsim, Dark Angel, Elusive City, Iffraaj, Pedro The Great, Rajsaman, Siyouni, Wootton Bassett and first-season sire No Nay Never, who already has three black-type performers in his first crop.

Among the exciting lots on offer are:

• 376, a half-brother by Zanzibari to the Listed winner High As A Kite, offered by Haras des Capucines.

• 379, a Bated Breath half-brother to the Listed scorer Zylpha, from Coulonces Sales.

• 381, the first foal out of the aforementioned Zylpha, by Penny's Picnic, consigned by Haras du Hoguenet.

• 388, a colt by Olympic Glory out of the Listed winner Alyzea, who has already produced the black-type performer Lykea. He hails from the draft of Haras d'Etreham.

• 399, a filly by Dabirsim out of Listed scorer Big Monologue, from Haras du Petit Tellier.

• 403, a half-sister by Captain Marvelous to the recent Listed winner Mascha, offered by Haras de Montaigu.

• 421, the first foal, a colt by Bated Breath out of a sister to the Group winning juveniles Zantenda and Kenya, consigned by Haras du Quesnay.

• 445, a half-brother by Kheleyf to the Listed-winning
juvenile Captain Chop, from Haras des Faunes.

• 452, a half-brother to Group 2 Suwannee River Stakes winner Elysea's Word from Sidestep's first crop. He will be brought to the ring by Haras d'Haspel.

Charm Spirit at the double at Salisbury

FIRST PUBLISHED 7:51PM, JUN 27 2018
The company hopes that the next Olmedo or Teppal may be found among the lots on offer