'Sea The Stars is one of the best horses I've seen'

Why the superstar has been a privilege to watch throughout 2009 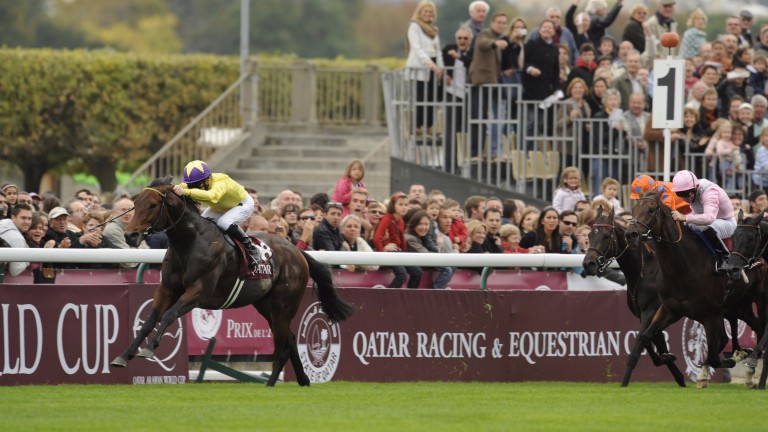 This article was first published in October 2009

I was useless at maths at school, distinguishing myself only for having the lowest mark – seven per cent – of any kid in my county at 'O' level in 1959. Simple arithmetic, fine; anything applied, no chance.

I don't claim to be any more gifted now, and though I long since came to accept that the applied maths used by handicappers was the best means of assessing the merits of racehorses, I've always wanted to qualify my acceptance. Best, yes, but no means perfect.

And for a classic example of its imperfection, bear in mind what you saw in Sunday's Prix de l'Arc de Triomphe, and then consider what the handicappers thought of the winner's performance.

Longchamp racegoers were in no doubt about what they had seen, and televiewers likewise must have been convinced, if not from the evidence of their own eyes, from the extravagant praise lavished on the winner by the presenters. Surely Clare and Willie wouldn't have lied to their millions of viewers, would they?

But a day later the mathematicians told us that they had lied. According to this paper's expert, Sea The Stars ran to a rating of 132+, not up to his marks in the Eclipse and the Irish Champion. Timeform was even less impressed, its rating of 129+ being also a couple of pounds lower than what he had achieved at York.

Of course, the + is a cop-out, an admission that the maths are inadequate. Indeed, Timeform has added a + to the rating assigned to Sea The Stars in every race he has run. So all we're actually told is that the colt is better than the rating, and it's up to us to guess by how much.

If we don't believe that he's inferior to such as Hurricane Run, Dalakhani, Sakhee and Montjeu, who all supposedly ran to a higher figure in the Arc, we can add on our own number and make it right.

And I suggest we do just that.

The bare result of this year's Arc, the margins that separated Sea the Stars from his pursuers, does not tell the real story. In fact, it never has in any of his races, because he has never done more than he has had to, but on Sunday he was entitled to be assessed, like divers, on degree of difficulty.

He got lit up early, pulled and threw his head about, got shuffled back, and was still in an unpromising position halfway up the straight. But when he got in the clear, he settled the issue in a few strides with a lightning burst of speed.

If the handicappers want me to believe that that was anything other than an outstanding performance by an exceptional athlete, then I'm sorry. They are wrong, and I am right. Sea The Stars is unquestionably one of the very best horses I have ever seen.

If I still can't quite persuade myself that he would have beaten the Sea-Bird who trounced an Arc field of supreme quality in 1965, that may be just because I've grown old in the belief that I would never see the equal of the hero of my youth.

But I can believe that the superstar we have been privileged to watch in 2009 would have defeated every other great horse of my era, so I rank him above such long-time favourites as Vaguely Noble, Nijinsky, Mill Reef, Brigadier Gerard, Shergar and Dancing Brave.

Sea The Stars doesn't need to go to the Breeders' Cup, where he wouldn't enhance his reputation by beating American inferiors and those he has already beaten here. I hope he will be allowed to rest on his laurels.

So what is this thoroughbred paragon worth? Some fancy figures have been bandied about, all rather pointlessly, given that by all accounts his owner is not particularly enthused over the idea of selling him.

But if he does change hands, we have to expect that this superstar racehorse, whose half-brother Galileo was himself a brilliant Derby winner and has already won a sires' championship, will realise a world-record sum.

Rather than sell him outright, Christopher Tsui might be well advised to try to form a syndicate of prominent breeders to invest in the horse. Syndication went out of fashion a while ago, when the mega-rich such as the Maktoums, Coolmore and Khaled Abdullah came to dominate the stallion business, but it should still have appeal as the way to get all the top people onside, spread the risk, and give the horse his best chance of success as a sire.

Throughout the history of the thoroughbred it has been evident that great racehorses do not automatically become great sires. For all his undoubted assets, which include an ideal temperament and outstanding physique, in addition to exceptional athletic ability and fine breeding, there can be no guarantee that Sea the Stars will pass on his best attributes to his progeny.

The London Olympics will have come and gone by the time the first yearlings by Sea The Stars go to auction. We are five years away from knowing whether any of his first crop are of Classic calibre. But for decades to come he will be the reason why racegoers remember 2009.