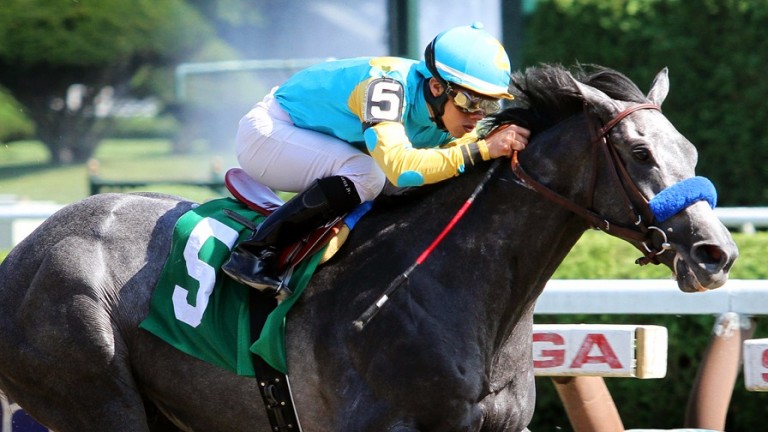 The Irish stallion ranks have gained an exciting new addition with El Kabeir, a son of Scat Daddy, new to Yeomanstown Stud for 2018.

El Kabeir carried the colours of Zayat Stables - made famous by Triple Crown hero American Pharoah - to victory on five of his 20 career starts, including the Grade 2 Jockey Club Stakes at two. He also finished a fine third to Frosted in the Grade 1 Wood Memorial Stakes at three, and retires with earnings of $946,557.

"He's a very exciting new stallion for Yeomanstown," said the stud's David O'Callaghan. "He's an exceptional-looking horse and was a sale-topper as a yearling and a smart performer on the track. He won his maiden at Saratoga by ten lengths and won the Jockey Club Stakes at two, and was placed in the Wood Memorial Stakes at three. He's a multiple Graded stakes winner from the sireline that everybody wants a piece of."

The five-year-old, a $250,000 yearling, is out of the unraced Great Venue, an Unbridled's Song half-sister to dual Grade 2 winner Too Much Bling. He becomes the second son of Scat Daddy to stand in Ireland, following on from Coolmore's No Nay Never.

"We were in touch with the Zayat team on and off for 18 months and Brad Weisbord was highly involved, acting as a go-between, so the deal didn't happen overnight," added O'Callaghan. "As a son of Scat Daddy with a nice profile in America he was very popular and a number of farms over there were interested in him. But we were lucky enough that we managed to strike a deal.

"He's currently in quarantine on my brother Peter's farm, Woods Edge in Kentucky. He has been there for two weeks so he will hopefully be available to view during the Goffs November Breeding-Stock Sale. We are cornering the market in grey stallions!"

El Kabeir joins Camacho, Gutaifan and Dark Angel on the roster at Yeomanstown, and with Dark Angel having supplied his fifth Group 1 winner, and third of the season, on Saturday, O'Callaghan was rightly in high spirits.

"Dark Angel has enjoyed a fantastic season again and Persuasive's win at the weekend took it to a whole new level," he said. "She beat the three-year-olds, four-year-olds, boys and girls in the Queen Elizabeth II Stakes and it was fantastic. Having Harry Angel and Baattash this season was phenomenal and then Persuasive took it to a whole new level as Dark Angel had been knocking on the door as a sire over a mile.

"It's fantastic for connections and for John Tuthill, who's a great breeder. Cheveley Park have been good supporters of the horse. John Gosden's season has been fantastic too, he has Juliet Capulet for Cheveley Park who won the Rockfel - we bred her and her brother, who made €350,000 here last month.

"Dark Angel has done it the hard way, there is no hiding place for a stallion and we are thrilled with all he has achieved so far."

El Kabeir's fee will be announced in the coming weeks.

FIRST PUBLISHED 5:52PM, OCT 24 2017
As a son of Scat Daddy with a nice profile in America he was very popular and a number of farms over there were interested in him