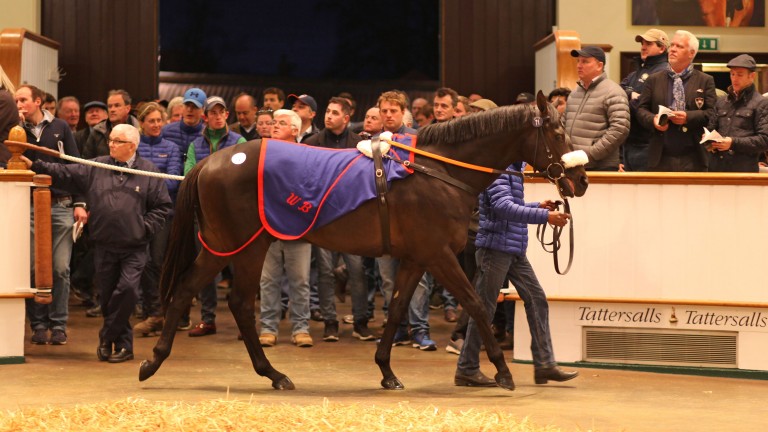 The Tattersalls Craven Breeze-Up Sale kicked off on Tuesday with a session of frenzied bidding that saw 16 two-year-olds fetch six-figures and an 800,000gns top lot that went the way of Charlie Gordon-Watson after a protracted duel with the Phoenix Thoroughbreds team.

Trainer Jeremy Noseda - who was joined by Phoenix's ceo Amer Abdulaziz - was on bidding duty, but each nod of the head was countered with an enthusiastic wave of Gordon-Watson's catalogue from the stairwell opposite Edmond Mahony's rostrum.

The price crept steadily from the 400,000gns mark, with Mahony's gavel raised on more than one occasion before Noseda threw in another bid. But when Gordon-Watson signalled 800,000gns Abdulaziz and the Phoenix team promptly turned and exited the bidding area.

"He's been bought for Dr Johnny Hon to run under his Global thoroughbreds banner," revealed Gordon-Watson. "The mare's done well and the pedigree goes back to a very nice family. He looks a very fast horse and the stallion is amazing. He'll be trained by Ed Dunlop."

Gordon-Watson's purchase matched the third-highest price paid at the Craven Sale, equalling the sum spent on a High Chaparral colt by Peter and Ross Doyle in 2014.

When asked if this was the most he had spent on a breeze-up horse, Gordon-Watson replied: "Oh god yes, I'm still in shock!"

The colt is out of the Cape Cross mare Alegendinmyownmind, whose three winners include another son of Scat Daddy named Dali, who won a Naas maiden for Aidan O'Brien and the Coolmore partners last year.

The session-topper, one of the talking horses of the sale, was pinhooked by Egan and Robert Moss for $270,000 from last year's Keeneland September Yearling Sale.

"I expected to get a good price for him but at that level you never know how far it can go," said Egan, who also rode the horse during his breeze. "He's a very, very nice horse. He did everything right all along. I was very happy, he did a progressive breeze, the kind of breeze that I'd like if I was buying one.

"I couldn't pull him up until I got to the Cambridge Road! I don't want to break the clock during the breeze because I want them to be racehorses. When you breeze them too fast they mightn't necessarily come out of it, and I know he's going to go places and I didn't want to hinder that."

More Than for Godolphin

The second top lot on an evening dominated by the progeny of US stallions was a filly by More Than Ready offered by Katie Walsh's Greenhills Farm on behalf of David and Henrietta Egan.

The filly, who was reported to have clocked one of the faster times of the sale, fetched 500,000gns from the Godolphin buying team of Anthony Stroud, John Gosden and David Loder.

"John, David and I thought she breezed particularly well," said Stroud. "She did a very quick time, is by a very good stallion and is out of a Grade 1 mare. We all thought she was the one."

The filly, who went unsold at just $45,000 as a yearling, is out of Sis City who landed the Grade 1 Ashland Stakes for Richard Dutrow Jr. The daughter of Slew City Slew is already the dam of the Grade 3-winning Second City.

"I've had her since January," said Walsh. "She's just a gorgeous filly who was very well bought as a yearling, especially with her page. She's very straightforward, did what she had to do in the breeze - it just came very naturally to her. I'm delighted that Anthony bought her - I hope she's very lucky."

Another lot to boast a heavyweight US pedigree was the son of Animal Kingdom offered by Tally-Ho Stud, with Alex Elliott going to 420,000gns to secure the colt on behalf of Kaleem Shah. The agent was accompanied by former Newmarket native Simon Callaghan, who will now take charge of the colt's racing career.

"He'll go to California - he's a horse that came highly recommended," said Elliott of the half-brother to Paved, who finished third in a Santa Anita Grade 3 earlier in the month.

"His breeze was fantastic and he's got a big pedigree update too. Me and Simon actually used to live together when I was assistant to Eoin Harty in Hollywood Park. This is the first time Simon has been back to this sale since he moved to the States."

This was the second time the colt's value had taken a marked increase, with the $57,000 foal having been pinhooked as a yearling for $200,000.

"I've been meaning to make it to this sale for a while now," added Callaghan. "This horse makes a lot of sense, and with that pedigree I think he'll make a really nice turf horse from the summer onwards."

It was during the 2015 renewal of this sale that Alastair Donald unearthed the following year's Craven Stakes winner Stormy Antarctic, who added a second Group 3 to his CV when landing the Prix Edmond Blanc at Saint-Cloud earlier this month.

And the agent was hoping he had found a similarly smart type when going to 240,000gns for another son of Stormy Atlantic offered by Stormy Antarctic's vendor, Brendan Holland's Grove Stud.

"He's a bit of a clone of a horse we bought called Stormy Antarctic," said Donald, who also revealed the colt would be trained by Ed Walker. "He didn't actually breeze that well but he's a big, gangly horse at the moment - but he's a gorgeous individual. Brendan was very sweet on him and he knows when he has a good one."

Holland pinhooked the colt for $72,000 at last year's Keeneland September Sale. Bred in Canada by Josham Farms, he is a brother to Canadian champion two-year-old Conquest Typhoon, and out of dual winner Swanky Bubbles.

"The own brother was a champion two-year-old but I expect this colt to need a bit of time," added Donald. "Let's hope he's as lucky as the last Stormy Atlantic we bought."

The strength of Scat Daddy's representation had been one of the main talking points in the lead up to the Craven Sale, and the sire's first offering, a colt consigned by Kilminfoyle House Stud, provided an early highlight when the Hong Kong Jockey Club (HKJC) landed the spoils with a bid of 375,000gns.

"Someone was telling me the other day that Scat Daddy is like Snitzel in the southern hemisphere," said the HKJC's senior international racing consultant Nick Columb. "He's a great loss. We've never had the opportunity to get one before so we're delighted."

The colt, who went unsold at $140,000 as a yearling, is the first foal out of a sister to the Grade 3-placed Dynamia.

He will now join the rest of the HKJC's European-sourced stock at Malcolm Bastard's yard before being shipped to Hong Kong, where he is likely to be offered at the 2019 renewal of the International Sale.

The very first lot through the ring brought 145,000gns from Dwayne Woods, who saw off Alastair Donald for a son of Rathbarry Stud's freshman sire Moohaajim offered by The Bloodstock Connection.

"There's no big plans at the moment," said Woods. "We'll see how he goes but he's an absolutely stunning horse - I've seen every single colt on the premises and, in my view, he's the best physical specimen."

The colt - the first foal out of Nellie Forbush, a Phoenix Reach sister to the Group 2-placed Whiplash Willie - has now been through the ring on four occasions, though his turn on Tuesday was by far his most fruitful date with the auctioneer, having been picked up for just €16,000 as a yearling.

"So far so good!" said The Bloodstock Connection's Johnny Hassett. "Timmy O'Byrne picked him out for me. It took me two goes to buy him, I tried at the Tattersalls Ireland September Sale when he was bought back, but then he popped in the Open Sale at Goffs and I managed to get him for €16,000.

"I wasn't thinking Craven Sale for him initially, but every time we worked him he showed up. It's a great result because the fella who led him up, my main rider Pat McLoughlin, owns a bit of him too."

While trade was strong at the top tier, the sale proved to be feast or famine for vendors, with the session finishing with a clearance rate of just 58 per cent, with only 38 of 66 offered lots finding a buyer.

The Craven Sale concludes on Wednesday.