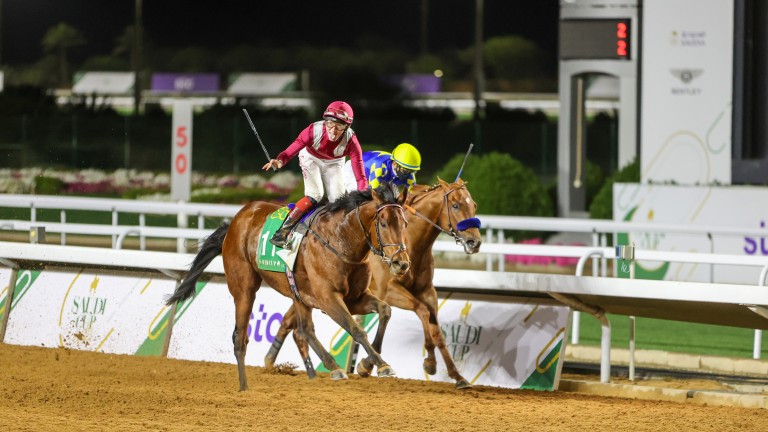 Last year's Prix du Jockey Club hero Mishriff proved that dirt or turf comes all the same to him after a stunning success in the $20 million Saudi Cup on Saturday.

David Egan's mount wore down US hotpot Charlatan, who himself had got the better of a speed duel with market rival Knicks Go, to score by a length over the mile and one furlong trip on dirt, with the front two pulling six and a half lengths clear of the former Tom Dascombe-trained Great Scot. Favourite Knicks Go was fourth.

Mishriff, a son of Ballylinch Stud's promising young sire Make Believe, had a year earlier finished second in the Saudi Derby before a campaign in Europe that saw him land the French Derby and Prix Guillaume d'Ornano in impressive style.

Mishriff, whose connections decided not to supplement for the Arc in the autumn, is yet another produce of Prince Faisal's select but hugely successful breeding operation.

The four-year-old, trained by John Gosden, is out of the Raven's Pass mare Contradict, who is herself out of a daughter of the prince's outstanding foundation mare Rafha in Acts Of Graces.

Acts Of Graces, a Group 3 and Listed winner for the late John Dunlop, is therefore a half-sister to sire phenomenons Invincible Spirit and Kodiac, as well as the stakes-winning Massarra, better known as the dam of Superlative Stakes scorer and Coolmore sire Gustav Klimt.

Mishriff's dam, who has also produced Listed winner Orbaan and Craven Stakes runner-up Momkin - a son of Bated Breath who had finished sixth behind Space Blues earlier at Riyadh in the Turf Sprint - is currently carrying to Frankel.

Make Believe, who stands this year for a fee of €15,000 and is a close relation to dual American Grade 1 scorer Dubawi Heights, is responsible for four individual Group winners to date, including Oh So Sharp and Musidora Stakes victress Rose Of Kildare. 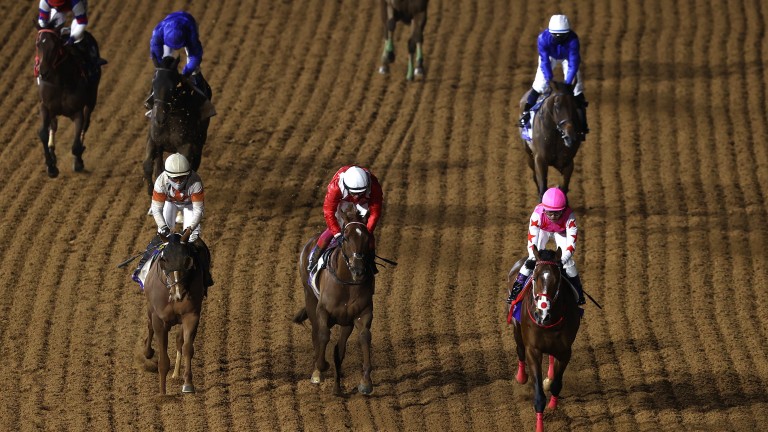 Earlier, Japanese runner Pink Kamehameha sprung a surprise when pulling out all the stops in the Saudi Derby.

The three-year-old Leontes colt, a close relation to the dirt Group-placed Tosho Freak and a half-brother to the three-time Grade 1 scorer Sweep Tosho, was making his first start on dirt but managed to hold on to defy the fast-finishing Cowan.

Pink Kamehameha's damsire is the brilliant Dancing Brave, who was famously denied a Derby victory of his own by Shahrastani at Epsom in 1986, finishing fast but too late to catch the Aga Khan's colt.

The Spring At Last gelding Copano Kicking is a four-time Graded winner in Japan and is out of the Gold Halo mare Celadon, who hails from the family of Andre Fabre's Prix Ganay and Prix d'Ispahan victor Creator.

FIRST PUBLISHED 6:40PM, FEB 20 2021
Make Believe, who stands this year at Ballylinch Stud for a fee of €15,000, is responsible for four individual Group winners to date