Satono Aladdin to shuttle to Rich Hill Stud for 2018 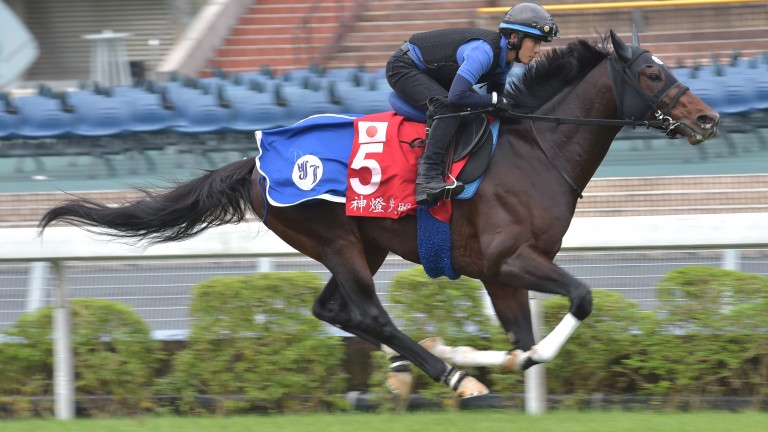 Japanese Grade 1 winner Satono Aladdin will shuttle to Rich Hill Stud in 2018 where he will stand for an introductory fee of NZ$12,500.

The farm has teamed up with Shadai Stallion Station to offer the Grade 1-winning son of sire sensation Deep Impact and Storm Cat’s  Grade 2-winning daughter Magic Storm, who is also the dam of Grade 1-winning mare Lacesis and Grade 3-placed Flawless Magic.

Satono Aladdin won eight of his 29 career starts, including the Tokyo Yasuda Kinen and amassed ¥450,903,000 in prize-money.

"We believe that is outstanding value for a horse of his looks, pedigree and race record and we are extremely excited that Shadai have offered us the opportunity to establish this sire line in New Zealand," Rich Hill Stud's John Thompson said.

"He will breed a restricted book and at that fee we would expect him to fill quite quickly. He’s a quality individual who will be a great asset to the New Zealand breeding industry.”

"He had a great turn of foot and his time of 1:31.5 for the 1600 metres that day was amazing, just point-two of a second outside the race record.

Satono Aladdin will stand alongside fellow shuttler Vadamos, who will remain at a fee of NZ$15,000.

"He received a great reception from breeders both in numbers and quality with 159 mares," Thompson said. "He was New Zealand's most popular first-season stallion."

Proisir’s, whose first yearlings through the ring this year averaged A$39,344, fee will remain at NZ$7,000.

"In his first three seasons he has averaged 130 mares," Thompson said. "He's been hugely popular and his first crop yearlings sold up to A$160,000. He is at an exciting phase in his career."

The roster is completed by former New Zealand Horse of the Year Jimmy Choux, who will be offered to breeders at a fee of NZ$5,000.

FIRST PUBLISHED 1:05PM, APR 20 2018
He will breed a restricted book and at that fee we would expect him to fill quite quickly. He’s a quality individual