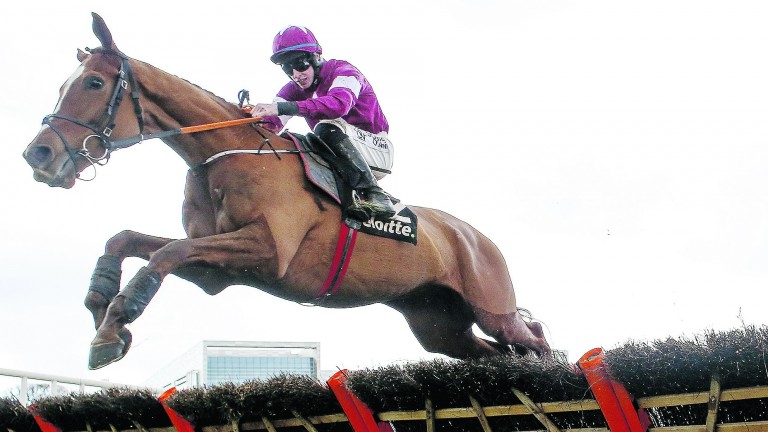 Think Positive out to make a big mark

Few horses have set the world alight like Samcro, the Gordon-Elliott-trained superstar who has two Grade 1 victories to his name. Now his half-brother Think Positive will be thrust into the limelight as he makes his debut for Willie Mullins in the Goffs Land Rover Bumper on the first day of the festival.

Douglas Taylor bred Think Positive out of the unraced Saddlers' Hall mare Dun Dun, who he had purchased for just €12,000 as a four-year-old at the Tattersalls Ireland November National Hunt Sale.

Think Positive is a half-brother to the winning hurdler Cocacobana while Dun Dun herself is a sister to the Grade 2 novice chase winner Master Of The Hall and a half-sister to Leinster National scorer Pairofbrowneyes.

By the late Jeremy, who has produced the ill-fated Our Conor and Grade 1 scorer Jer's Girl, Think Positive finished fourth on debut in a Towcester bumper for previous trainer Peter Hedger in November, having been secured by Brian Beirne for €30,000 at the Goffs Land Rover Sale in 2017.

Taylor has since moved to secure the horse he sold and the four-year-old will carry his breeder's colours in Tuesday's contest as Think Positive bids to become a star of his own.

Since being unearthed for £10,000 at last year's Goffs UK Spring Horses In Training Sale by Aidan O'Ryan and Gordon Elliott, Doctor Phoenix has more than rewarded his new connections.

For Elliott and the Nick Bradley Racing Club, the ten-year-old has run seven times winning three races including the Grade 3 Paddy's Rewards Chase at Naas in February. He also finished second in the Grade 2 Webster Cup Chase last month and, despite falling behind Un De Sceaux last time out, has more than earned his chance to tackle the Grade 1 Boylesports Champion Chase on Tuesday.

Bred by John O'Donovan, he is the first foal out of the unplaced Anshan mare Lowroad Cross and is a son of former Dunraven Stud resident Dr Massini - who has supplied the likes of Massini's Maguire, Rocky Creek and Sound Investment.

The ten-year-old could capture a windfall of €162,250 if he goes on to land the spoils, earning significantly more than was outlaid for him less than 12 months ago and completing a real rags-to-riches tale for all involved.

The death of brilliant middle-distance performer Fame And Glory has been much lamented in recent weeks after the son of Montjeu supplied a first winner under rules in Young Ted at Thurles last month.

At Punchestown we'll see more of his stock when Young Ted bids for a second victory in the bumper on Wednesday and Largy Glory, who is entered for the mares bumper that follows shortly after Young Ted runs.

Young Ted was an impressive 14-length on his second start and he was bred by Kathleen McKeever out of the unraced Lahib mare Last Of Many, a half-sister to Grade 2-winning hurdler and chaser Shotgun Willy and to Welsh National hero Mini Sensation. He was purchased by his trainer Noel Meade for €15,500 at the Tattersalls Ireland November National Hunt Sale in 2015.

Largy Glory was last seen winning a bumper at Carlisle earlier this month and that performance clearly captured the attention of prospective new buyers as she is now owned by Robcour and trained by Jessica Harrington. She hails from the family of legendary hurdler Istabraq and is clearly an exciting prospect for all involved with her.

For years Sprinter Sacre was the leading light for his sire Network, winning regularly at the Cheltenham Festival and crossing the Irish Sea five years ago to win the BoyleSports Champion Chase from Sizing Europe.

Now Network, who stands at Haras d'Enki in France, will have four runners over the course of this year's meeting in A Sizing Network, Bel Ami De Sivola, Bon Papa and Delta Work.

Bel Ami De Sivola, last seen winning a novice handicap chase earlier this month, is entered for the Grade 1 Ryanair Novice Chase on Thursday and holds entries for three other races at Punchestown this week.

Add A Sizing Network and Bon Papa into that mix and by the time the curtain comes down on Punchestown on Saturday evening, we could be looking at a very productive meeting for a talented sire.

Draconien to give Linda's Lad a first Grade 1?

Among the other sires set to have runners at the Punchestown festival is Linda's Lad, a Group 1-winning son of Sadler's Wells who will be represented by Draconien.

Sourced from France to carry the Clipper Logistics colours and trained by Willie Mullins, the five-year-old is his sire's second best performer with a Racing Post Rating of 136.

A half-brother to five winners in Bol D'Air, Nasthazya and Vroum, Draconien was last seen finishing 12 lengths behind Getabird in a Grade 2 novice hurdle earlier this month.

While Getabird will be hard to beat in Tuesday's Herald Champion Novice Hurdle, Draconien also holds an entry in the Profile Systems Novice Champion Hurdle on Friday. If he were to go on and win either contest, he would become a first Grade 1 winner for his sire.

FIRST PUBLISHED 7:19PM, APR 23 2018
The death of brilliant middle-distance performer Fame And Glory has been much lamented in recent weeks