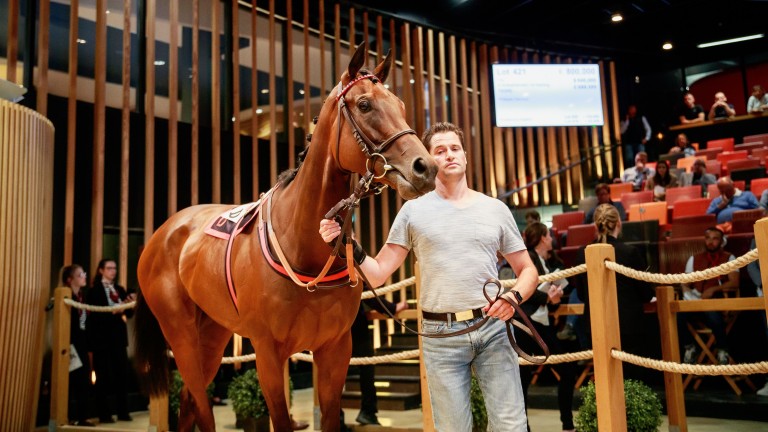 France's World Cup-winning striker Antoine Griezmann has known some drama during his career but, for the hush that descended as his German 1,000 Guineas heroine Txope took to the Arqana sales ring, the tension was off the charts.

As the winning agent confirmed little more than five minutes later after a rapid and high-powered shootout: "It's rare that a filly of that calibre comes on the market at public auction."

The daughter of Siyouni was a €310,000 yearling purchase but when Ludovic Cornuel asked for an opening bid of €500,000 - and after only a little coaxing achieved that ambitious basecamp - it was clear it would take something special to separate three interested parties.

While one stream of bids came by phone high to Cornuel's right, Nicolas Bertran de Balanda kept piling on the pressure from the top of the staircase under the lefthand bid board.

In the end both had to give way when a final raise of €100,000 from outside the pavilion brought the short and brutal contest to an end.

BBA Ireland's Michael Donohoe and Yulong International have been a formidable combination this week and it will be the green and white silks of Zhang Yuesheng that will be carried the next time Txope races. 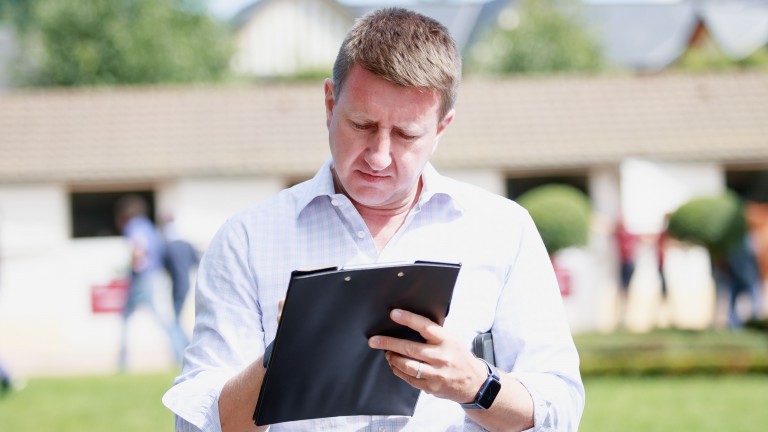 "We're going to sit down and make a plan," said Donohoe. "Sam Fairgray and Mr Zhang are both here. We're very tempted to send her to California for the Del Mar Oaks, that's at the end of August.

"She's got a lot of upside as she's a racing prospect and she'll be a lovely addition to the Yulong broodmare band in Australia at the end of her racing career. But we're very much looking forward to seeing her racing on and seeing what more she can achieve.

Donohoe added: "She was a beautiful physical, she vetted very well and she's a lovely pedigree so we weren't surprised.

"Mr Zhang has been a great supporter of European sales and he visited Arqana a couple of years ago. Eric Hoyeau and the team looked after him very well and he was keen to come back and support it."

Txope has been expertly campaigned by Philip Decouz and while there were any number of high-profile trainers in the ring to see her change hands, there appears to be no rush to decide who will guide her racing career going forward.

Newmarket trainer Amy Murphy has already clocked up eight wins in France this season from her Chantilly satellite and two-year-old Havana Angel provided further validation of the project when selling to Narvick International's Emmanuel de Seroux for €320,000.

A daughter of Havana Grey and the Epaulette mare Clamara bred by Gerard Mullins, Havana Angel finished third to subsequent Norfolk Stakes hero The Ridler before switching to France, where he supplemented a win at Dieppe with an excellent effort when third in the Group 3 Prix du Bois at Chantilly.

She hails from the family of Breeders' Cup Juvenile Fillies winner Sweet Roberta and will be heading to California herself, where she will carry the colours of Marsha Naify. 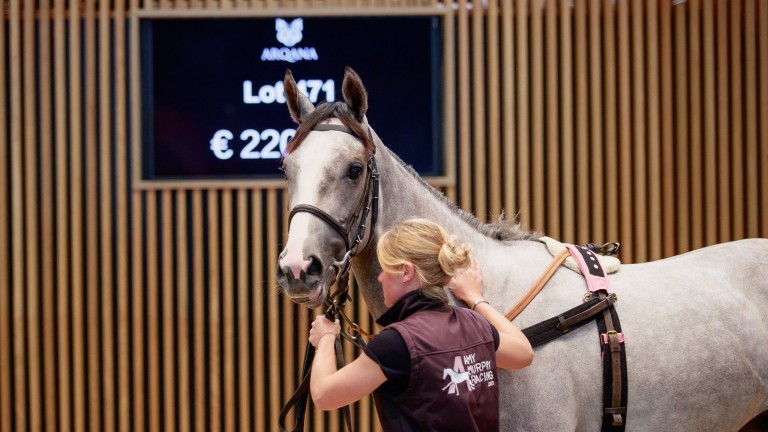 "I saw her run at Chantilly the other day and I was impressed," said Seroux. "She ran very well in a good field. She had been very impressive before and had run well in England against some very good horses. We think she has a lot of talent.

"The choice of the trainer will be up to Marsha but there is maybe a good chance that Leonard Powell could train her but Marsha will have the last word."

Powell will definitely be the trainer of Sarwar (lot 461), a son of Pedro The Great bought out of Henri-Francois Devin's yard for €105,000 by Mandore International's Nicolas de Watrigant.

Powell said: "Pedro The Great is sire we've had luck with and he's been bought for a syndicate that will include some of the same people that were involved in [Del Mar Oaks winner] Fatal Bere."

The Aga Khan Studs draft once again attracted a wide range of international buyers looking to tap into what this year is a breeding operation that enters its second century.

A daughter of Exceed And Excel who was sharp enough to win over six furlongs as a two-year-old, Kesariya (lot 240) is another filly set to join the Yulong broodmare band after Donohoe secured her early in Friday's session.

Bidding from outside the ring, Donohoe became locked in battle with agent Laurent Benoit, the principal of Broadhurst Agency taking instruction over the phone.

A winning raise to €150,000 from Donohoe was enough for Benoit's correspondent to cry enough, much to the delight of Fairgray.

"We'll make a decision in the next couple of weeks [in terms of] what we'll do with her," said Fairgray.

"Whether we breed from her here in the northern hemisphere or take her back to our stud farm in Australia." 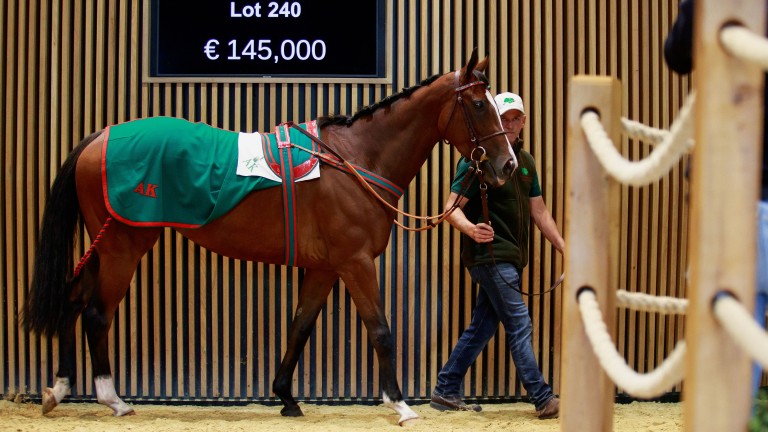 Asked about the strength of trade, Fairgray added: "It's been fantastic. Yesterday was very strong with a lot of buyers here and a great atmosphere. It's the place to be."

Kesariya's dam Kerasona won the Listed Prix Hampton for Jean-Claude Rouget before going on to be fourth in the Prix Meautry over six furlongs on her final start, while three of her six products of racing age have been winners.

Fastnet Rock filly Tashoura (lot 296) was unraced but her dam Tanoura won the Galtres at York for John Oxx before going on to be placed in the Park Hill and the Prix Royallieu on her final two starts.

Tanoura's son by Shamardal, Taniyar, and her Dubawi filly Tanaza both won stakes races while a third offspring, Taramansour, won the Bendigo Cup in Australia.

All of which added up to an irresistible package as far as agent Jason Kelly was concerned, as he went to €105,000 for Tashoura, who will now be among the foundation mares for a new breeding concern.

"She's a gorgeous filly and she’s been bought for some new clients of mine, Windmill Farm," said Kelly. "They are setting up a new stud farm in the north of England and she’s a filly that makes sense to go breeding from.

"Looking at the page she already has three black type siblings, the two-year-old Shamardal sister [Tarawa] has a Group 1 entry so she's a long-term breeding project with the page to back it up."

Willie Mullins will take delivery of three extremely well-bred horses among the top lots, headlined by Spanish Harlem, who won his only start over the Auteuil hurdles for Gabby Leenders at the beginning of June.

A son of Spanish Moon out of a sister to Roi Des Francs, the Mullins team had to fight off plenty of interest to secure the four-year-old gelding for €360,000.

He will carry the colours of Randox Health boss Dr Peter Fitzgerald and his sister Nicola was on hand to celebrate.

Absurde (lot 473) comes from from the Wertheimer draft will also be heading to Closutton after falling to French talent scout Pierre Boulard for €260,000. 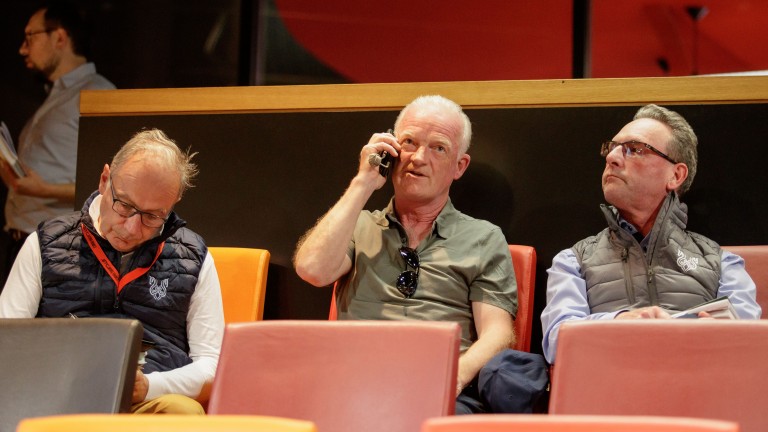 "Willie's clients love versatile horses that can be a success both jumping and as stayers on the Flat," said Boulard.

"Absurde has that dual-purpose profile and looks like he could go well on good ground and over further than he has tackled to date."

Daddy Long Legs (lot 443) is by Almanzor, whose first crop is only three and thus is something of an unknown as a jumps sire.

That did not deter the Mullins team from snapping him up for €210,000, coming as he does from a trusted source.

"He's a very good looking horse and we're delighted to get him, said Boulard. "He has a lot of size and will be better once he's been gelded,

"We've had a lot of luck buying horses out of Nicolas Clement's yard and he reminds me a lot of Melon."

A Fastnet Rock son of the Singspeil mare Incroyable, the dual Listed runner-up has compiled an impressively consistent profile and is rated 102.

One lot later there was lively competition to secure Afadil (lot 444), an Aga Khan-bred three-year-old son of Camelot out of the Invincible Spirit mare Afsheen and from the family of Poule d'Essai and Prix du Moulin hero Ashkalani.

Afadil earned a rating of 83 when breaking his maiden over 1m3f at Craon for Francis Graffard and looks set for a juvenile hurdling campaign.

"He's a beautiful strong horse that looks like a jumper," said agent Tom Malone, who was sourcing the €255,000 Afadil for a familiar client. "He'll have a break and then goes to Paul Nicholls."

Jose Delmotte, the man behind Haras d'Haspel, will be a nervous viewer as the Classic winner he bred at Haras d'Haspel takes on Vadeni and company in the Coral-Eclipse.

Native Trail has become a calling card for a breeder who has taken 20 years to become an overnight success, with the future Dewhurst and Irish 2,000 Guineas hero's Kingman half sister selling to Godolphin in this ring for €950,000 last August, while his Siyouni brother is due to grace this year's August Yearling sale.

Delmotte was out to further upgrade his mares early on the second and concluding day of the sale, with longtime ally Marc-Antoine Berghgracht striking at €135,000 for a regally-bred daughter of Frankel in foal to Darley's Victor Ludorum.

Lyra Star is out of multiple Group and Listed-placed Sea The Stars mare Light The Stars, whose siblings include Gestut Ammerland royalty in Lope De Vega, Lady Frankel and Lord Of The Land, while another Group 3 winning sister Bal De La Rose has produced stakes winners Danceteria and Blossomtime. 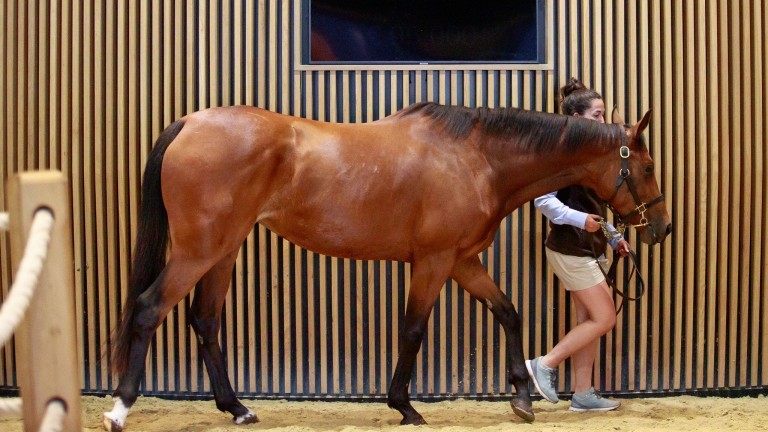 Jose Delmotte goes to €135,000 for Lyra Star, a regally-bred daughter of Frankel in foal to Darley's Victor Ludorum
Zuzanna Lupa

Delmotte said: "I didn't expect to have to go that high, I thought we could get her for €80-90,000. But the family is exceptional and I'm very happy. She will be a great addition to the farm and on top of the page, she was beautifully presented here.

"She is by Frankel, she is a beautiful model and she has everything going for her. Also she will be extremely easy to mate, she provides a great outcross so she really ticks every box."

Delmotte has no wish to increase the number of mares at Haspel, observing drily: "We already have 50 broodmares which is pretty good. In France we have some good stallions but not a ton, so that means sending quite a few mares abroad. When you then also have to pay for 50 covers.

"We're looking to improve the quality of the broodmare band rather than increase numbers for the sake of it. We have some mares that were winners but not at a particularly high level.

"I love every winner but you have to invest to improve the quality of the stock. And you have to keep the numbers reasonable because, with the stallions we are using, every one entails a significant outlay before there is any hope of a return on your investment."

Night Wish on the cusp of bright future at Anshoon Stud (£)

FIRST PUBLISHED 8:53PM, JUL 1 2022
She was a beautiful physical, she vetted very well and she's a lovely pedigree so we weren't surprised

'Night Of Thunder is very much a horse to target to buy yearlings by' Party host and winning breeder, it was a big weekend for Gerhard Schoeningh 'It's more what you can get your hands on' - Star Bloodstock on the Arqana mark 'They've got fast pedigrees and they're both by very good sires' 'That price was over my expectations' - €1.6m Shamardal colt leads way at Arqana Fine result for Whitsbury Manor and mob-handed Havana Grey
Bookmaker
Price
E.W. Terms
bet365
Open Account
Ladbrokes
Open Account
William Hill
Open Account
Coral
Open Account
Paddy Power
Open Account
Betfair
Open Account
Sky Bet
Open Account
Sporting
BetVictor
Boylesport