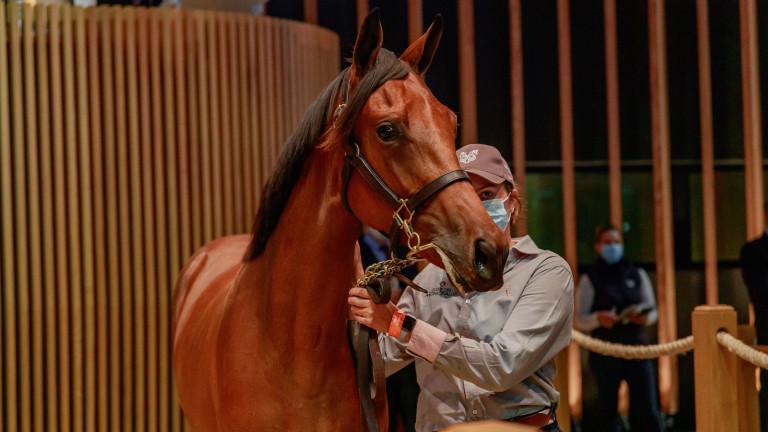 The third and final day of Arqana’s rearranged Select Yearling Sale was dedicated to part two of the catalogue, with a handful of lots realising three-figure sales on a day which is traditionally a chance for home trainers and agents to stock up.

Trainer Yann Barberot came out on top of a protracted bidding war with Jean-Claude Rouget, among others, when signing for Ecurie des Monceaux's Siyouni filly at €290,000, concluding an excellent week for the consignor, who topped trade with two millionaire lots.

The filly is out of the unraced New Approach mare Special Gift, whose best offspring to date is the three-time winner Global Gift and among her relations is Irish 1,000 Guineas heroine Halfway To Heaven, dam of the mighty Magical and Rhododendron, as well as Prix Niel scorer Brundtland.

Barberot said: "We loved her and I'd already seen her in the company of Olivier Thomas and Philippe Allaire. I bought her for Normandy Spirit which is a partnership.

He added: "I loved her but I didn't think she'd make that much. She walks really well and she carries the stamp of Siyouni."

Al Shaqab had a busy three days with representatives from their first-crop stallions among those offered, and they themselves got in on the thick of the action on Friday when going to €180,000 for Samos, a son of the exciting Wootton Bassett and from the family of Moyglare Stud winner Cursory Glance.

Nicolas de Watrigant of Mandore Agency, bidding on behalf of Al Shaqab, said: “We had to fight a lot but we’ve been lucky in the past with Wootton Bassett including with a nice horse called Wooded, and we’re happy to invest in another son.” 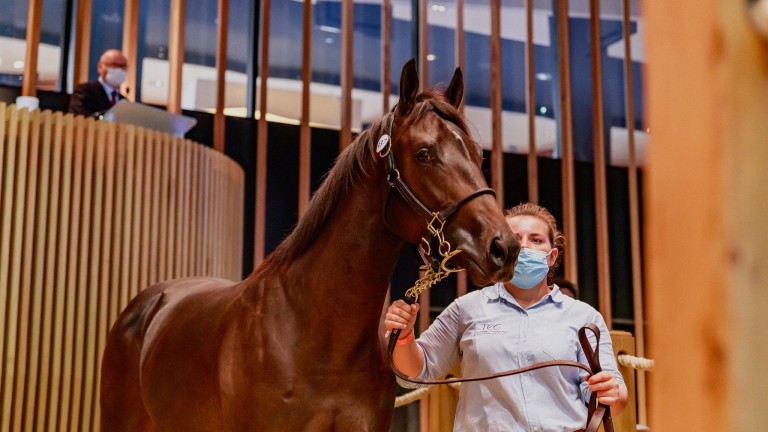 Wootton Bassett secured two of the top four prices of the day and is responsible for this year's Prix Jean Romanet heroine Audarya among 15 stakes winners overall.

De Watrigant made another six-figure purchase when signing for a Kodiac filly on behalf of  owner Jean-Claude Seroul. She is out of the four-time winning Rip Van Winkle mare Purple Magic and a relation to the Group 2 winner Cesare.

Coolmore top of the lot for popular colt

Coolmore came to the fore for their latest stallion recruit Wootton Bassett when Laurent Benoit struck a €140,000 winning bid for the colt out of the winning Mount Nelson mare Mezzo Mezzo.

Benoit said: “Following the acquisition of Wootton Bassett by Coolmore, we were looking for a son of his. I bought him for MV Magnier and he will go to Andre Fabre. We looked at all the Wootton Bassetts and we came down on him.

“Andre Fabre will be delighted to rekindle the link with Zafonic, which will bring back good memories and this will be his first Wootton Bassett.”

Earlier on in the day, a Kodiac half-brother to the Group 3-winning Alounak also traded hands for €140,000, with BBA Ireland’s Michael Donohoe confirming the smart looking colt would likely head to Ireland.

He said of the Haras de Castillon-consigned lot: “He’s a fabulous individual. He looks very precocious and a real two-year-old, quite typical of the sire. The Danehill line has worked well in the family, we liked everything about him and he vetted very clean. He’s by a proven stallion and from a proven family so he ticked all the boxes.” 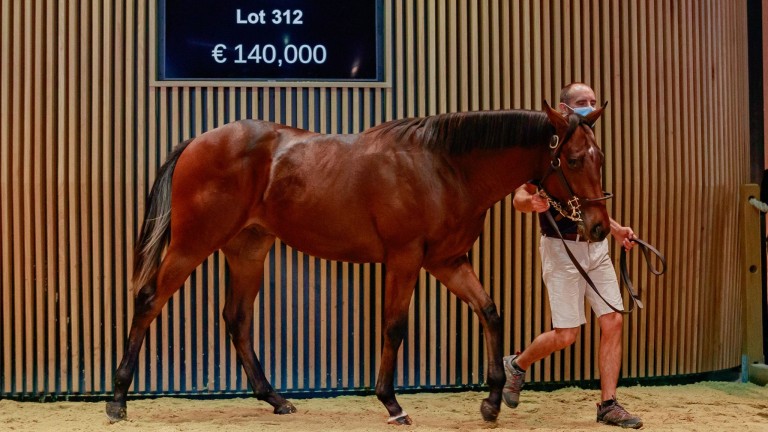 Donohoe added that the horse had been bought for a Middle Eastern client, who already has horses in training in Europe, and a trainer will be decided later this year.

Jean-Claude Rouget has made his presence felt over the three days and he went to €135,000 to secure James Bere, the only son of Prix Jean-Luc Lagardere third Whitecliffsofdover offered at the sale.

He explained: "I’ve had a lot of success with this mare’s offspring and he’s as good looking as any of them. As this is her last I’ll try and turn him into a stallion! He’s a lovely looking colt and I’m sure I paid too much but two of us loved him as my good friend Frederic Rossi was after him as well."

Rouget also went to €105,000 when purchasing Perle Blue, a Le Havre filly from the family of Melbourne Cup scorer Protectionist and staying supremo Stradivarius, as well as €100,000 for a Zarak filly offered by Haras des Capucines.

Allaire to the fore with six-figure purchase

Barberot also took aim when purchasing a Churchill relation to the brilliant Danedream and Great Voltigeur scorer Venice Beach for €100,000.

Bought for Philippe Allaire, a major breeder and trainer of trotting horses, the filly is the third offspring from Ignis Away, a ten-year-old daughter of Gold Away whose first produce was the winning Australia filly, Heart Reef.

Barberot said: “When the mare’s first produce is a winner it’s a pretty straightforward decision to buy. She’s from a good family and is a nice breeding prospect. I don’t see her as being especially precocious and I hope she will make a nice three-year-old. She certainly has the build for that.” 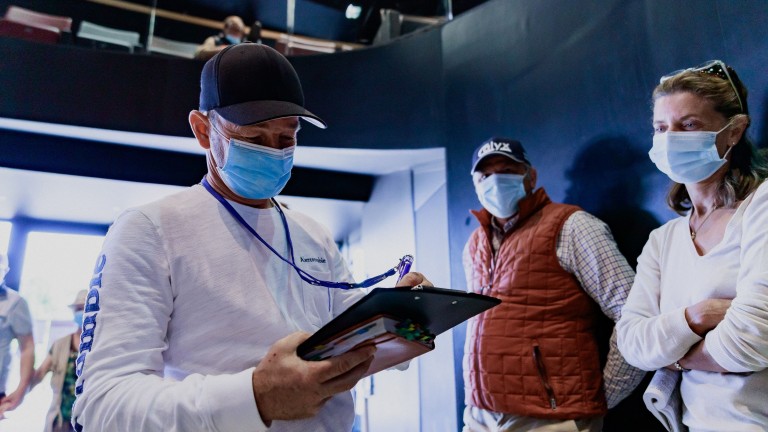 Yann Barberot signs for lot 370, a filly by Churchill and out of a half-sister to Prix de l'Arc de Triomphe winner Danedream
Zuzanna Lupa

On the subject of his association with Allaire - director of the Haras Bouttemont which stands the legendary trotting stallion Ready Cash - Barberot added: “We’ve been lucky with our two-year-old Bouttemont, who won well the other day. It’s great to work closely with another professional [like Allaire] and you can always learn more.”

Grewe said: “It’s a German family and we love Lope De Vega. Hopefully for this money it’s a good buy. He’ll go to Germany to the stud for a few weeks and then come to my stables in Cologne.”

The first three-figure lot of the session went to Channel Consignment’s Wootton Bassett filly out of the Listed-winning Alta Stima. Reaching the €100,000 mark, Jean-Michel Lefebvre, on behalf of Ecurie Melanie, signed the docket.

He said: “We really wanted a nice daughter of Wootton Bassett and she looks a real two-year-old type. We liked the look of her physically and we really fell for her.”

FIRST PUBLISHED 7:00PM, SEP 11 2020
She walks really well and she carries the stamp of Siyouni