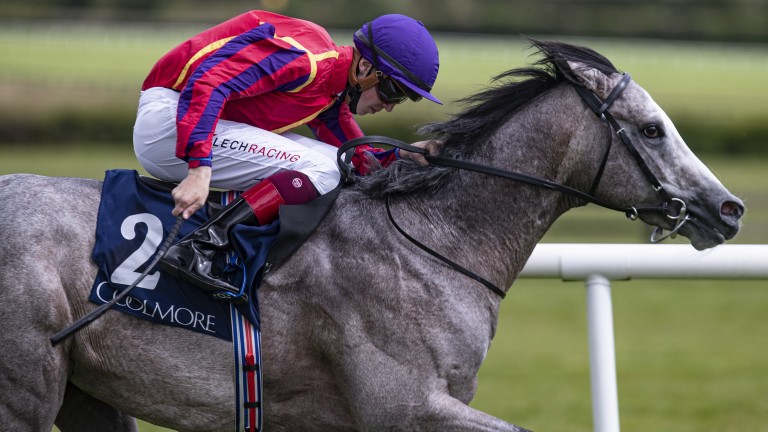 Andreas Vesalius was a recent winner for Joseph O'Brien at Naas
Patrick McCann
1 of 1
By Bloodstock World Staff 3:09PM, JUN 7 2021

Eleven lots have been catalogued for this year’s Goffs London Sale, which takes place on Monday, June 14, the eve of Royal Ascot.

This year's event will take place as a live broadcast on the Goffs website, with selling to pre-registered bidders commencing at 1pm.

The majority of lots offered are expected to hold entries at the royal meeting and the catalogue includes three winning two-year-olds. Ardad colt Tipperary Sunset is unbeaten in two starts for John Quinn, including the Continental Two Year Old Trophy at Beverley, while  Acclamation's Albion Square scored at Navan for Jessica Harrington.

Andreas Vesalius, a son of Caravaggio who won at Naas, is one of three offerings from Joseph O'Brien's yard, along with three-year-old Visualisation and four-year-old Gleneagles filly So I Told You.

Among the three-year-olds is a representative from France, with Christophe Ferland's Perseverants already a Listed winner at Toulouse, while Beau Jardine, Military Mission, Zinc White and Hong Kong Harry have also shown good signs of ability during the season already.

Goffs has introduced a bloodstock agent or licenced trainer commission of five per cent, subject to conditions of sale, while a limited number of appropriate wildcard entries will also be considered until the end of the week.

FIRST PUBLISHED 3:09PM, JUN 7 2021
Among the three-year-olds is a representative from France, with Christophe Ferland's Perseverants already a Listed winner at Toulouse