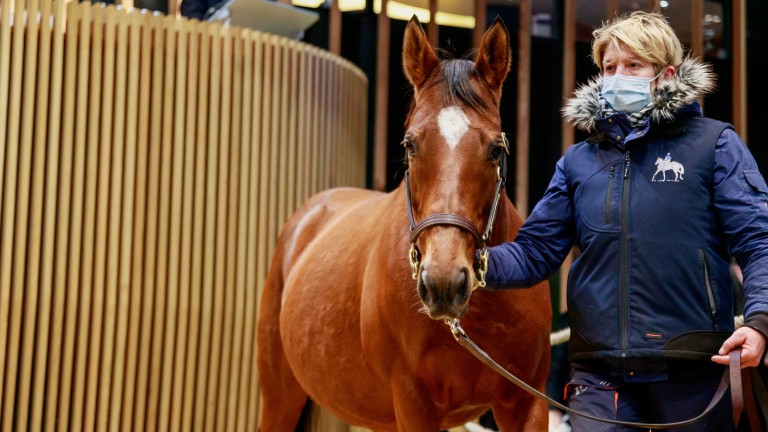 Prices may have cooled following a blockbuster opening session, but the agent responsible for a record-breaking buy on Saturday remained to the fore on day two of the Arqana Breeding Stock Sale.

Fresh from signing for the sales-topper Rougir at €3,000,000, Michel Zerolo of Oceanic Bloodstock was back in action on Sunday and struck the session's first €180,000 bid for the well-related Sisila, who was sold by the Wertheimer brothers.

The unraced five-year-old is by Dansili and is the first foal out of Silasol, winner of the Group 1 Prix Marcel Boussac at two who added a second top-flight victory to her race record when winning the following year's Prix Saint-Alary.

She was offered in foal to Shaman, the Yeomanstown Stud stallion who carried the Wertheimer silks to victory in five races, including the Group 2 Prix d'Harcourt. The son of Shamardal was also placed in three Group 1s.

While Zerolo's day one purchases were made for high-rolling clients Peter Brant and the Coolmore partners, he said Sisila would be joining his own personal broodmare band.

"I've bought her for myself," he said. "It's a lovely pedigree, it's one of the best Wertheimer families and I love Dansili mares. She's a young mare who's good looking so hopefully she will produce. There could be some updates in the pedigree too.

"Shaman was a good racehorse and he's by Shamardal, so you have to respect him."

Sisila has got her own breeding career off to a promising start as her first foal Sitello, a son of Intello trained by Freddy Head, opened his account at two this year.

The page looks like being in line for some potentially significant updates in the coming years, as Fasol, a son of Silasol and Galileo, showed distinct promise when runner-up on his only start at two, while Sisila has fillies by Camelot, a yearling, and Nathaniel, a foal, on the ground.

Reflecting on trade during the first two sessions of the Arqana Breeding Stock Sale, Zerolo said: "The good stuff makes plenty of money, sometimes too much money because it stands out, but with some of the rest you can't give it away. It's the same old story."

On the day it was announced that Boscaccio is heading to Knockhouse Stud in County Kilkenny, a New Bay half-brother to the German Group 2 winner joined Sisila at the head of the Deauville market when knocked down to Haras de Meautry at €180,000 late in the marathon session.

"He's for Edouard de Rothschild, and if he's good he'll be trained by Andre Fabre," said stud manager Nick Bell. "He's a nice horse and a very good walker, and of course he's by a good sire."

Consigned by Haras du Hoguenet, the March foal is out of Bianca De Medici, a daughter of Medicean who hails from the same family as two-time Prix de l'Arc de Triomphe winner Treve.

Romanosa switches to the States

While breeding and pinhooking prospects dominated the top of the market, the lightly raced Romanosa will join day one's seven-figure lots Purplepay and Speak Of The Devil in continuing her racing career in the US.

The three-year-old daughter of Holy Roman Emperor boosted her profile since the catalogue was published having gained some valuable black type when third in the Listed Prix Ceres on her most recent outing. Nicolas de Watrigant of Mandore International struck the winning bid at €140,000.

"She's headed for America," said De Watrigant. "She's for Madaket Stables and partners, and she's going to be trained by Breeders’ Cup champion trainer Christophe Clement. She's a lovely filly with nice form and she keeps improving. She's a filly with a turn of foot, so she should suit American races. We're glad to get her."

Romanosa made her third appearance at public auction when offered by trainer Mathieu Brasme, having been signed for by the Fairway Partners at 18,000gns as a foal before she went unsold at €25,000 at the V2 Yearling Sale in the Deauville ring.

Flanagan on target with Showcasing colt

The first six-figure transaction on Sunday came when Mick Flanagan secured the Showcasing colt out of Lightupthenight with a bid of €135,000. The agent signed as Rathbran House Stud, while the foal was consigned by Haras des Cruchettes as part of the dispersal of stock from Al Shahania Stud.

"He's a good-moving, strong colt and by a stallion who's obviously produced Group 1-winning colts and fillies," said Flanagan. "We'll take him back to Ireland and hopefully he'll do well over the winter, spring and summer and then we'll bring him back to the yearling sales next year.

"Let's see what happens next year and how the stallion goes. If Showcasing has a load of good horses in France then he could come back here but we'll just keep an open mind." 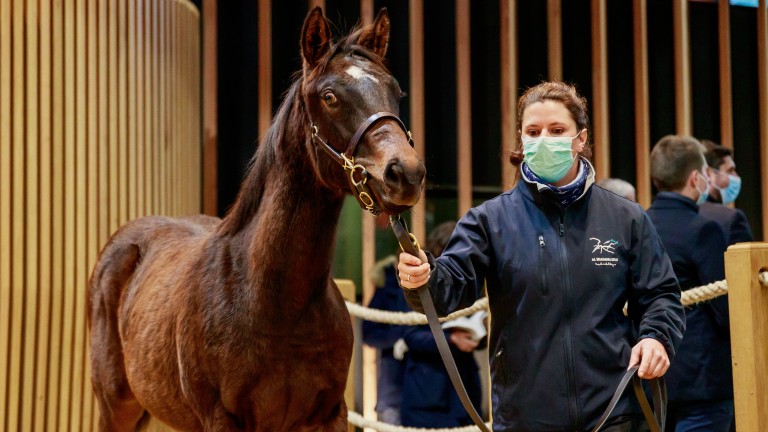 The Showcasing colt sold to Mick Flanagan at €135,000
Zuzanna Lupa

The dam won twice in the colours of Sheikh Mohammed Bin Khalifa Al Thani, and was also third in the Listed Prix Amandine having been purchased as a yearling by Bertrand le Metayer for €450,000 at Arqana in 2015.

Lightupthenight also came under the hammer during the Saturday session of the Arqana Breeding Stock Sale, with Gerard Larrieu signing the ticket at €190,000. The Dutch Art half-sister to Prix Jean Prat winner Intellogent was offered in foal to Almanzor.

Flanagan has enjoyed pinhooking success with the progeny of Showcasing before, having bought a sister to Tasleet for 220,000gns from breeder Whitsbury Manor Stud who was then resold to Mark Player at €850,000 at the Goffs Orby Sale. Named Lady Light, the filly won one of her two starts for the China Horse Club and Michael Bell.

"Showcasing has been good to me before as we got €850,000 for a filly a few years ago at Goffs," said Flanagan. "She won impressively first time out and then was placed in a Listed race but unfortunately got injured so she's a broodmare now. I've continued to follow Showcasing's progeny into the ring whenever I see them though."

The €135,000 mark was hit again a short while later when Ghislain Bozo of Meridian International landed an Adlerflug filly foal who hails from the same extended family as the aforementioned Showcasing colt.

Offered by Haras de la Cour Blanche, the filly is the first foal out of Nabatea, a German-bred daughter of Camelot whose siblings include the Group 1 winners Nymphea and Nutan. Her third dam is Night Teeny, dam of Nuit Polaire whose brood includes Intellogent and Lightupthenight. 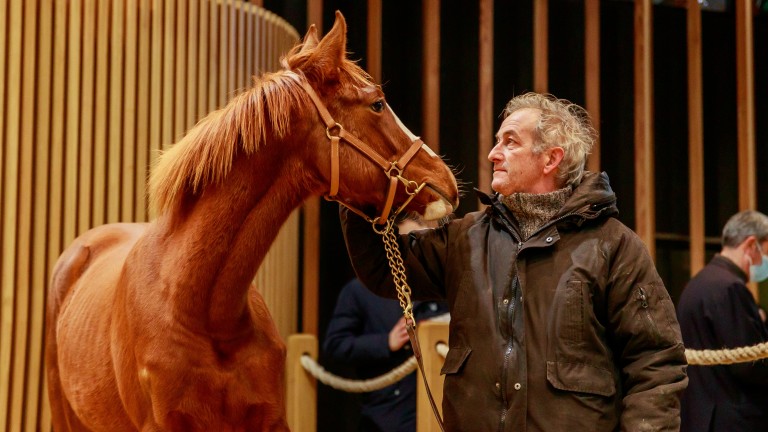 Lot 335: the daughter of Adlerflug was bought as a racing and breeding prospect for Gestut Brummerhof
Zuzanna Lupa

"She's been bought for Gestut Brummerhof," said Bozo. "They are Classic breeders and they've loved this filly from the beginning. She has the Camelot factor as well, which adds a lot of quality. It's a long-term plan to buy a filly like her as they will keep her to race in Germany and then eventually breed from her."

The Brummerhof brand has been carried with the greatest distinction by Prix de l'Arc de Triomphe heroine Danedream, while the operation's Julia and Gregor Baum have also bred and raced the likes of German Oaks scorer Diamanta and Hackwood Stakes winner Waldpfad, who now resides in the Brummerhof stallion barn.

Shortly before 9.30pm Stuart Boman of Blandford Bloodstock signed for the session's seventh six-figure lot when going to €120,000 for Grey Mystere.

The four-year-old daughter of Lethal Force was a winning juvenile for Jean-Claude Rouget and added black type to her page when runner-up in the Listed Grand Criterium de Bordeaux.

She was consigned by Normandie Breeding and offered in foal to three-time Group 1 winner and Dalham Hall Stud resident Too Darn Hot.

"I'm delighted to get her," said Boman. "She was very well presented and is a stakes-class filly. Her first cover is from an exceptional racehorse in Too Darn Hot. She'll probably head back to Britain and hopefully have a nice first foal. She's been bought for a client of Richard Brown's."

Grey Mystere, who is out of a Mr Greeley half-sister to Prix Saint-Alary winner Coquerelle, sold at the same sale 12 months ago, when she fetched just €35,000 from Langlais Bloodstock.

The debut crop of foals by Ballylinch Stud's Waldgeist continued to impress as Meridian International went to €100,000 for the colt out of New Revenue offered by Elevage de Tourgeville.

The dam is a once-raced Dark Angel half-sister to dual Group 3 winner New Providence and Shadwell's Ekhtiyaar, who twice filled the runner-up spot in Meydan Group 3s, including when behind Blue Point in the Nad Al Sheba Turf Sprint. 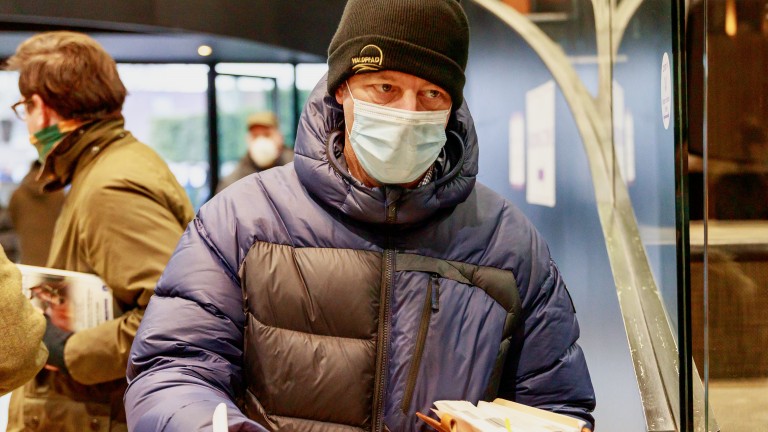 The February foal was bred by Thierry Lohest and Thierry Storme after they purchased the dam for €40,000 with the foal in utero.

"He's an exceptional foal," said Bozo. "I've been very impressed by the Waldgeists I've seen through the sales. His progeny are very well balanced, solid horses who have size and very good temperaments. They're horses with a lot of quality and very few faults.

"This colt is going to go to Ballylinch Stud and will be for them to race or resell, we'll see what happens."

One of the catalogue's more exotic pages brought one of the session's more eyecatching prices when Nicolas Clement emerged victorious from a protracted duel at €92,000 for Galifa.

The Wertheimer-bred daughter of Frankel is out of Viva Rafaela, a Brazilian-bred daughter of Know Heights whose race record includes victory in her native country's Oaks in 2012. She later switched to the stable of Todd Pletcher, for whom she was placed in a host of Graded contests, including a third-place finish in the Grade 1 Flower Bowl Stakes.

Viva Rafaela joined the Wertheimer fold when bought for $500,000 at Fasig-Tipton in 2015. She has bred two winners from four foals of racing age, while Galifa reached the frame on all four outings for Andre Fabre and the mare's two-year-old, Sea The Stars filly Babala, was third on debut in late October.

"She was bought to win a maiden over the winter and then we will see whether she keeps racing or whether we breed from her," said Clement. "There's a two-year-old running for us so there's some upside there.

"I'm not against the South American pedigree but the mare was also placed in New York. I probably wouldn't buy if it was only South American form in the pedigree, although they do produce some tough horses."

Following the record-breaking first day, the opening two sessions reached turnover of €38,755,500, which is already 53 per cent more than the entire 2020 sale grossed with two sessions still to come.

The Arqana Breeding Stock Sale continues on Monday with a session starting at 11am local time (10am GMT).

FIRST PUBLISHED 8:30PM, DEC 5 2021
The good stuff makes plenty of money, sometimes too much money because it stands out