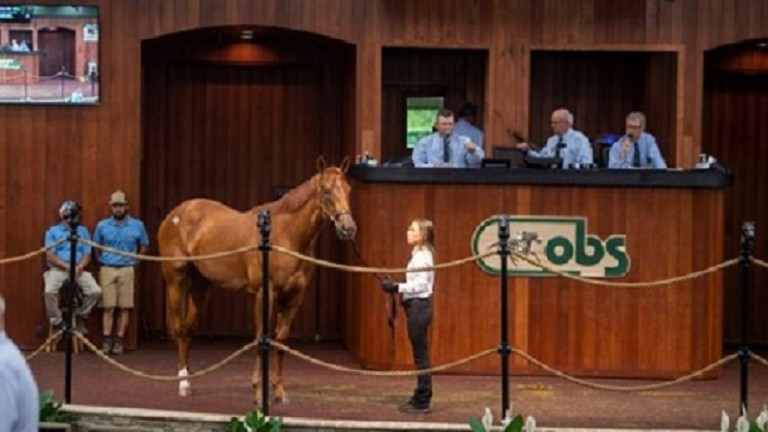 On a final bid of $425,000 from Gary Young, agent for Amr Zedan of Zedan Racing Stables, a chestnut filly from the initial crop of Ashford Stud stallion Practical Joke topped the opening session of the Ocala Breeders' Sales June Sale of 2-Year-Olds in Training and Horses of Racing Age in Ocala, Florida.

Previously purchased by Billy Williams for $45,000 out of the Taylor Made Sales Agency consignment at last year's Keeneland September Yearling Sale, the filly breezed an eighth-mile in :21 1/5, a bullet work in the second under tack preview last Thursday.

Young was impressed by the filly's breeze and strong gallop out.

"I thought her breeze was unbelievable," said Young, who indicated that Bob Baffert will train the filly.

"She went in :10, she went :21 1/5, she went :33, and :45 1/5, and the first part of the breeze was conducted with a pretty good tailwind. The last part of the breeze, when she started up the backstretch, there was a pretty strong headwind hitting her in the face and she still went from :33 to :45 1/5 from the three-quarter pole to the five-eighths pole and they had a pony pull her up. They couldn't pull her up. She was like a runaway freight train. I think she was going to do a few more laps if they didn't get to her, but the pony got her pulled up."

Young has had plenty of success buying for Zedan at OBS. He bought Medina Spirit at the same sale a year ago (then held in July due to the Covid-19 pandemic), acquiring the Protonico colt for $35,000 from the consignment of Whitman Sales.

He also picked out Zedan's Princess Noor, a subsequent Grade 1 winner, for $1.35 million at last year's OBS Spring Sale of 2-Year-Olds in Training, where the Not The Time filly was consigned by Top Line Sales.

"She's a nice, big filly," Young said of Wednesday's session-topper. "I think she actually looks like she will be a really good three-year-old. We had good luck with these people [Jimbo and Torie Gladwell of Top Line Sales]; we bought Princess Noor from them last year. Time will tell. I thought she was the best horse in the sale."

Of Young's latest acquisition, Torie Gladwell of Top Line Sales said following the filly's under tack breeze: "She was in the April sale [OBS Spring Sale]. We had her over there, but she came up with a little issue about 45 days before the sale, so she missed two or three breezes.

"We knew she wasn't going to be ready. We used that sale as kind of a precursor to getting her ready for this sale. She prepped decent but not great for that sale. She learned a lot. We took her home and continued with her training, and from then until now, she has really blossomed and bloomed and turned into a racehorse. She's a big, stretchy filly with a huge stride."

Consigned by Jesse Hoppel's Coastal Equine, agent, the bay colt is out of the winning Kitten's Joy mare Artillery Punch. Previously purchased by Hoppel for $120,000 at last year's Fasig-Tipton Kentucky October Yearling Sale, the colt worked an eighth-mile in :10 1/5 at the under tack preview.

"I thought it was a solid day, a solid start to the sale," noted Todd Wojciechowski, OBS' director of sales. "The average being $41,298 was up substantially over last year, even though we hate to make comparisons to last year because last year was so tough. All in all, it was a good start to the sale.

"There was activity at all levels, and the numbers bear that out. The June sale is all grown up. If you look at the sales calendar in general, there has been a shift to later sales, and I think that has helped the June sale become what it has.

"It used to be that there weren't any yearling sales after September. Now there are quite a few yearlings that are still being sold all the way to the end of October. With the natural progression of pushing things later, and consignors having the opportunity and the confidence that they can take their time with a horse that needs it, now they know they can still be rewarded with it here in June."

FIRST PUBLISHED 11:29AM, JUN 10 2021
She's a nice, big filly. I think she actually looks like she will be a really good three-year-old