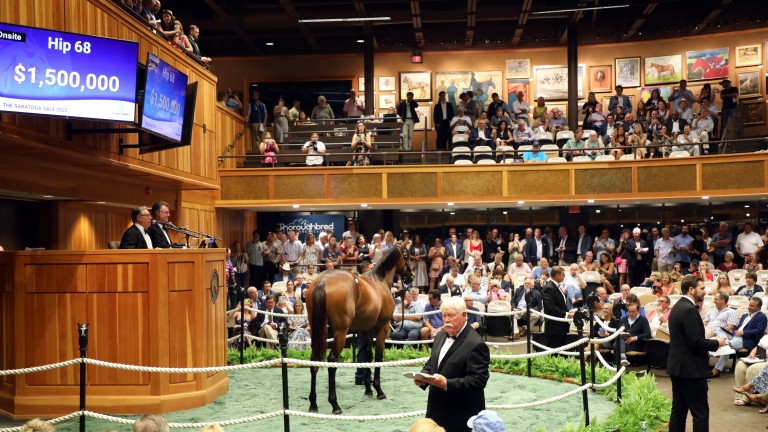 Summer Wind Equine's Uncle Mo colt tops the opening day of the Saratoga Yearling Sale at $1.5 million
Fasig-Tipton Photosphotos
1 of 1
By Claire Crosby and Lauren Gash of Bloodhorse 11:52AM, AUG 9 2022

The Saratoga Sale, Fasig-Tipton's select yearling sale in Saratoga Springs, kicked off with a bang in the Humphrey S Finney Pavilion as the gross, average and median all climbed.

The atmosphere was electric with a packed house inside and in the back ring. A son of Uncle Mo consigned by Lane's End as hip 68 took top honours after selling for $1.5 million to a partnership of West Point Thoroughbreds and Woodford Racing, L.E.B.

The colt, bred by Jane Lyon's Summer Wind Equine, was one of four yearlings to hit the seven-figure mark on Monday evening.

It was at this sale in 2019 that Lyon sold Flightline - the $1m Tapit colt who has risen to become one of North America's top performers this season.

So it was no surprise when Lyon's lone offering strode into the ring that the numbers on the bid board started to climb, and continued to do so until the hammer fell at $1.5mi and Lyon had herself a day one session-topper.

He was bred in Kentucky out of Tapit's unraced daughter Secret Sigh, herself out of the multiple Graded winner India, making the dam a half-sister to multiple Grade 1 winner Mozu Ascot, by Frankel. 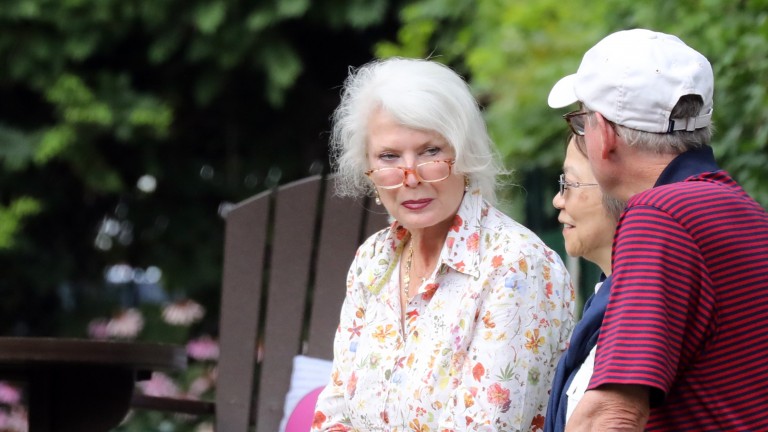 This is a Summer Wind family that goes back three generations to the Miswaki mare Misty Hour, the dam of stakes winner Pilfer, who produced Grade 1 winners Angela Renee and To Honor And Serve.

West Point campaigns Flightline in partnership with Hronis Racing, Siena Farm, Summer Wind and Woodford, and Lane's End sales director Allaire Ryan was thrilled to see a few of those partners join again to take home the next generation.

"It was fun for some of those connections to come together again; hopefully maybe we have another Flightline on the horizon," said Ryan.

"This was a colt that kind of separated himself from the rest of Jane's yearling crop when we started doing inspections early on in the year, just a really classy individual. He's a smart horse, a really intelligent horse, and showed himself with a lot of that professionalism that you like to see in these top colts."

For West Point's Terry Finley, the drop of the hammer brought sincere relief despite his familiarity with pursuing big-figure horses at public auction.

"I was glad when the announcer said, 'That's all,'" said Finley, who added the colt will head to Hall of Fame trainer Shug McGaughey. "It was getting up there but I'm sure there will be some others that we'll buy over the course of the sale season that we'll get at a discount. It's exciting for the partners all around to play a part in a good colt like this."

West Point, with L.E.B. as agent, went almost all-in on the session-topper, purchasing only one other yearling - this one on their own - on Monday night. That was hip 17, a $240,000 Practical Joke filly out of the Malibu Moon mare Malibu Gem consigned by Four Star Sales.

Bred in Kentucky by Don Mattox and Pam Mattox, the filly is from the family of Grade 3 winner Meadow Gem, with Grade 2 winner My Conquestadory further down the page. The mare has produced four winners from five to race.

Browning said: "We are delighted with the opening session of the 2022 Saratoga Yearling Sale. Although there was a significant improvement in all the statistical categories, we hit the superfecta having the average up 16 per cent and median up 16 per cent.

"We are thrilled with those numbers. The gross was up 17 per cent, and an RNA under 20 per cent in a highly selective sale is a tremendous accomplishment."

Lane's End sales director Allaire Ryan said of the strength of the market: "Very strong. Plenty of depth as well; I think if you have a quality individual, there was no shortage of vet work - whether it was from pinhookers or end users.

"There's obviously competition at the highest level for those kind of elite offerings. But I think overall the foot traffic at this sale has been unbelievable. We've been very busy the whole way through and people are here with good intentions. It's nice to see the select market start off on such a strong foot like this; it gives us some optimism headed into the fall sales now."

Breeder Christian Black of Blackstone Farm saw hip 78 sell for $1.1m via Warrendale Sales to MV Magnier, who had Michael Wallace of the fledgling Telluride Agency sign the ticket.

"I think it's a very competitive market if you have the right horse," said Black. "It's polarised like it always is. This [elite] segment of the market has always been pretty strong, but it's a good market."

West Point Thoroughbreds and Woodford Racing were the session's leading buyers with their single purchase at $1.5m. 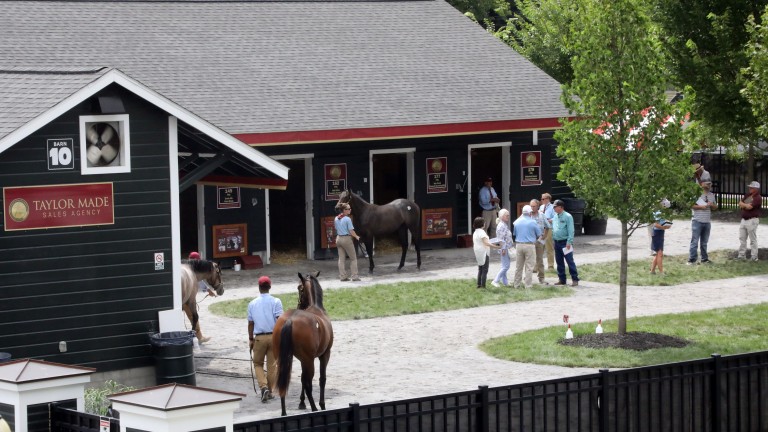 "There's a lot of things going on in the world, but I think the people buying horses at this level aren't impacted by that much," said West Point's president and CEO Terry Finley after signing the sales slip for the session-topping colt.

"I knew that there were some significant buyers [competing for the horse]. I think there probably were more than just the two of us past the million-dollar mark.

"When you have a little bit more pedigree and the physical, you're going to be between one and two million. It just matters on the other side, how far they want to go."

"Most encouraging is the breadth of buyers when you go through the results," said Browning. "There was lots of activity from a diverse buying group.

"We know there is already some competition for private sales, and our goal will be tomorrow to sell every one that we didn't sell tonight through the ring, to get them sold. It's important to have a clearance rate that high."

Browning added: "Great start, and I can't wait for tomorrow. I'm really looking forward to it. It all relates to the quality of horses, and many folks brought tremendous horses here; I hope they feel rewarded tonight."

FIRST PUBLISHED 11:52AM, AUG 9 2022
This was a colt that kind of separated himself from the rest of Jane's yearling crop when we started doing inspections early on in the year