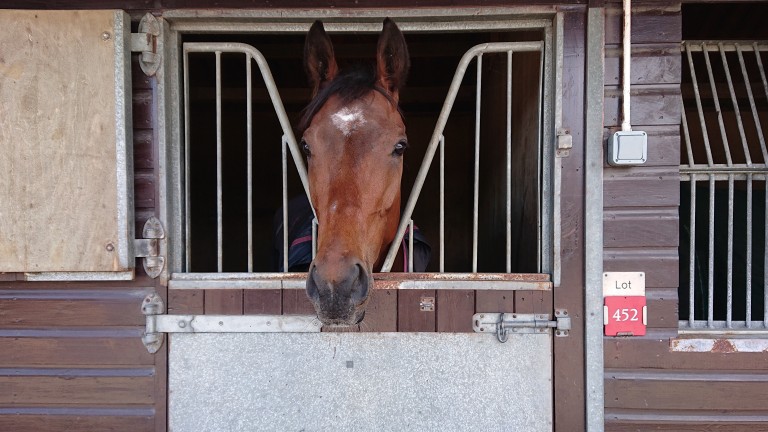 Viewers of Line Of Duty were led to believe at one point that there might be more than one Ted Hastings, with the senior investigating officer of police corruption coming under suspicion for secretly running an organised crime gang at various stages of the hit BBC drama.

With the scrupulous reputation of the show's cult hero restored in the much-watched finale, Peter Flood picked a timely moment to unveil his equine namesake at a point-to-point at Dromahane on May 9.

After an impressive front-running victory, the Kildare-based trainer is striking while the iron is hot by offering Ted Hastings as lot 452 of Wednesday's Spring Sale at Doncaster.

"It was my girlfriend Zoe's idea, we thought he was a good one and that we might give the name to a good horse," he said. "He won the race well and hopefully it might catch someone's eye."

Adrian Dunbar is on The Andrew Marr Show right now on BBC One ahead of the #LineOfDuty finale tonight @BBCPolitics. pic.twitter.com/JBGcXHAdYA

Flood bought the five-year-old son of Imperial Monarch, who is related to smart chasers Farmer Jack and Second Schedule, a couple of years ago and owns him together with fellow consignor Virginia Considine.

He insists that the appearance of Ted Hastings at this particular moment was not entirely opportunistic.

"It all just happened by chance, it was funny the way it worked out but we'd both been following the programme for a long time," he said.

"Dromahane is the track to be at, all the good ones have come out there, but we liked him and thought if we got him there he'd do the job.

"It's been a tough year with them at home, so it was great he did what we wanted him to do. He's 16'2, and athletic, he jumps and there's pedigree back along. He'll win plenty of races anyway."

Flood, who has around 20 in Grange Stables and has sold on the likes of Kid Commando, Brief Ambition and Enjoy D'Allen so far, is not ruling out a Steve Arnott or Kate Fleming appearing in the future.

"We've got more into having a few younger horses, trying to sell them on, so you never know," he added.

FIRST PUBLISHED 1:34PM, MAY 18 2021
It was funny the way it worked out but we'd both been following the programme for a long time