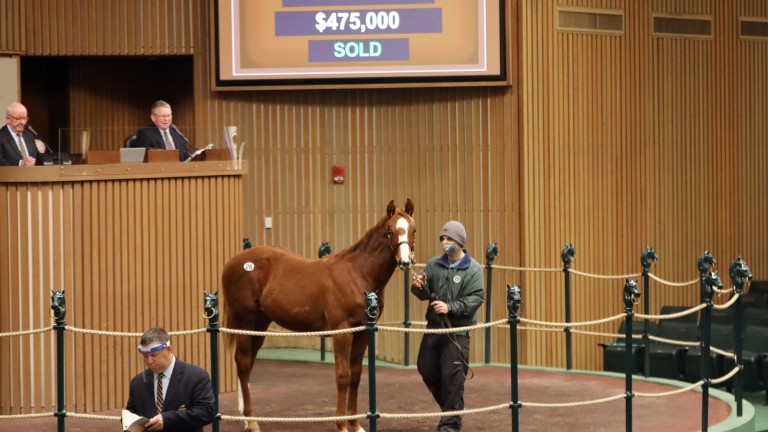 The ongoing success of Munnings as a sire saw his colt lead the way on Monday
Keeneland Photo
1 of 1
By Meredith Daugherty of BloodHorse 11:12AM, JAN 12 2021

Buoyed by the promise of a new year, buyers came out in full force on Monday for the opening session of the Keeneland January Horses of All Ages Sale and helped feed a solid market that left many hopeful about the year ahead.

"It was a fabulous day. How could you expect this?" said Adrian Regan of Hunter Valley Farm, who ended Monday's session as the second-leading consignor.

"We don't usually bring this number to the January Sale. I think it's the biggest group we've ever brought. We knew we had a good group but with everything going on around the world, we thought we'd have a good day, but we weren't expecting this."

Internet bidding, which was introduced last year as a way to provide buyers an alternative outlet and contact-free method of procuring horses in the wake of the COVID-19 pandemic, proved popular once again Monday.

"We had nearly $1 million in sales today on the internet so it was very active," said Keeneland president and CEO Shannon Arvin.

Leading the way as the top seller for the session was a colt by Ashford Stud stallion Munnings which was purchased by Larry Best's OXO Equine for $475,000. Consigned by Hunter Valley Farm and bred in Kentucky by Ben Colebrook and John T Colebrook, the colt is out of the Jump Start mare Sea Shadow.

"Myself and Fergus [Galvin] were hoping he'd bring $150,000- $200,000," said Regan. "He doubled our expectations basically. He was a lovely horse. We've been breeding to Munnings all the way down to the time whatever his lowest fee was.

"We've bred to him almost every year. But in the last 12 months, every Saturday he's had a stakes winner around the country and I think the market has really clicked to how good a sire he is. He's a fantastic sire."

Regan said the decision to hold the colt over to the January sale instead of selling him as a weanling in November allowed him just the right amount of time to mature.

"He was owned by Ben Colebrook and his parents and Ben is a very good friend of ours," said Regan. "We'd seen the horse on the farm and thought he was very good. We just decided to wait and give him an extra couple of months. Thankfully, it worked out.

"We're delighted for Ben and his parents that it worked out so well. Sometimes it works and sometimes it doesn't. It worked out today. Best of luck to Mr. Best. It's great to see him put so much money into the market when things are so shaky."

"A prominent consignor/buyer was in my office prior to him selling and told me, 'I've got to go out and see if I can even bid on this horse,'" said Geoffrey Russell, Keeneland's director of sales operations. "He was very highly-touted beforehand as one of the top lots today. Munnings is getting the recognition that he's starting to deserve.

"I think this was the highest price for any Munnings progeny, so it was very competitive bidding at all levels unto the last and it was very exciting. And to do it so early in the sale it helped build momentum."

In total, Hunter Valley consigned 23 horses to the January sale, 17 of which sold through the ring on Monday for gross receipts of $1.894 million. The additional six failed to meet their reserves.

"It wasn't really a plan [to bring more this year]," said Galvin. "We put a lot of our good foals into November and we didn't really differ from that plan this year. We held a couple this year - our later foals - just so we didn't have all of our eggs in one basket. We also just had more entries from outside the farm. And we had plenty of racehorse as well which boosted our numbers." 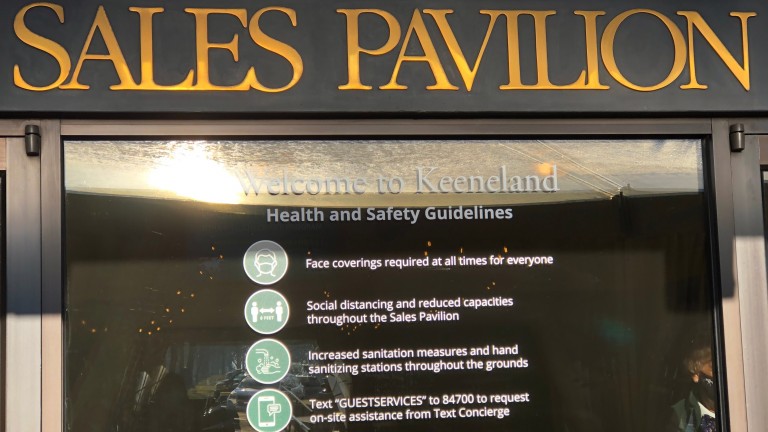 Russell said he was pleased to see that in the wake of the continuing Covid-19 pandemic, buyers and consignors had pivoted their focus and adjusted their expectations in a way that helped them accept -and even overcome - the challenges of the current market.

"I think it's a continuation of the November Sale," said Russell. "People have adjusted to the marketplace and I think it was a good steady start to the January sale."

Book 1 of the Keeneland January Sale will conclude on Tuesday and will be followed by a two-day Book 2 held on January 13 and 14. With plenty of horses left to sell and a truncated period of time in which to sell them, consignors like Doug Arnold of Buck Pond Farm said they remain ever hopeful that the market remain strong through the end of the week.

"I've heard other people say this but there is plenty of money for the right horse," said Arnold. "There is not a huge crowd here but things are coming back and I think things are going to get better as time goes on. I think most of the people buying short yearlings feel that there will be a lot of optimism in September. I think that is what this sale reflects, but as you know, we are the most optimistic people in the world."

FIRST PUBLISHED 11:12AM, JAN 12 2021
We've been breeding to Munnings all the way down to the time whatever his lowest fee was